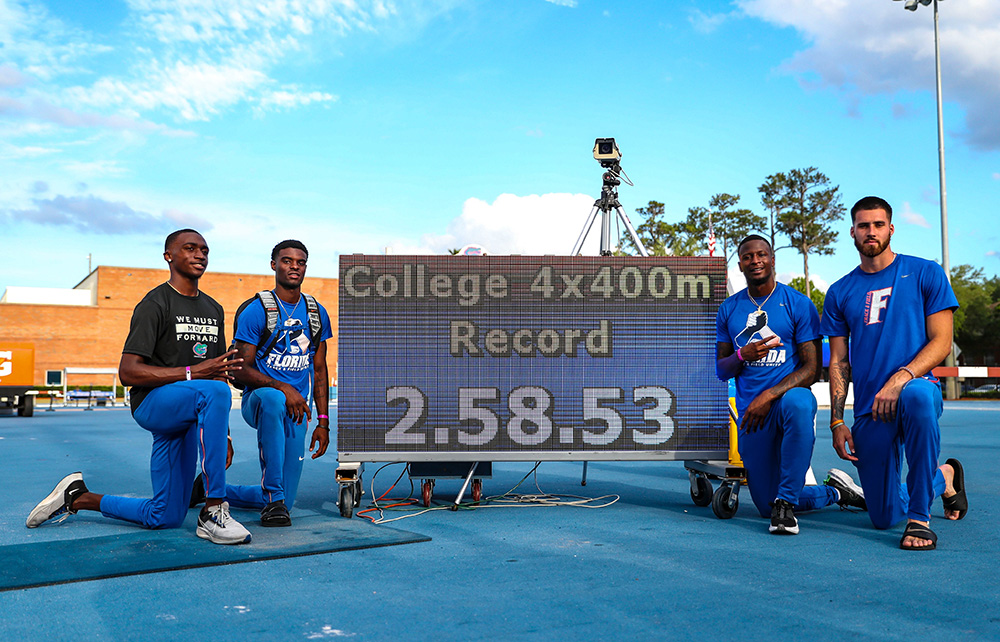 A national magazine says A&T will have to knock off national leader Florida in the final event to win the NCAA Div. I Outdoor Track & Field Championship this week in Eugene, Oregon.

NC A&T men’s track team’s effort to win the 2022 NCAA Div. I Outdoor Track and Field Championship this week will come down to the final event. That’s the opinion of a prestigious national magazine.

Track & Field News bills itself as ‘The Bible of the Sport since 1948.” In an online story on June 3, writer and former Olympic decathlete Dave Johnson makes that prediction.

The story is entitled “2022 NCAA Men’s Formchart #4 — Wait Till The 4×4.” It includes predictions for all the individual events and team outcomes. Johnson says A&T will enter the men’s final event, the 4×400 meter relay, tied for the lead with Texas with 34 points. Florida and Georgia, Johnson opines, “will be right behind, knotted at 32 (points).”

“HERE’S THE SCENARIO: assuming the rest of our formchart has shaken out as we have projected it — and yes, we know that’s a big if — the meet will come down to the climactic 4×4 with the team title very much up in the air.”

The idea is not far fetched at all. That’s exactly what this year’s Div. I Indoor Championship came down to. A&T entered the final 4×400 relay event trailing Texas 37-35 but finished eighth in the event to finish as national runners-up to the Longhorns.

Johnson predicts that Florida, who had the second-best 4×4 qualifying time in the regionals at 3:01.22, will win the event. It would then take home 10 points and the team title with 42 points. Florida ran a nation’s-best and collegiate record of 2:58.53 earlier in the outdoor season. The Gators are the only foursome to run below 3 minutes this season.

Johnson says Texas, who comes in with the best qualifying time from the (West) regionals at 3:00.70, will finish third in the event (six points) behind Florida and Kentucky. The Longhorns will finish second in the team competition with 40 points.

NC A&T, who has the third best 4×4 qualifying time (3:01.59), will finish fifth in the event according to Johnson. The Aggies with garner 4 points and finish third in the championship race with 38 points. Freshman Raheem Hayles, junior Randolph Ross Jr., senior Akeem Lindo and sophomore Shemar Chambers make up the 4×4 team.

A&T is the defending champion in the event but only returns Ross from last year’s quartet that won both indoor and outdoor NCAA titles. The Aggies finished third in the 2021 Outdoor Championship with 35 points behind LSU (84 points) and Oregon (53).

NC A&T has steadily moved up

Johnson’s story is the magazine’s fourth and last forecast of the outcome of the Div. I championship that runs this week from Wednesday, June 8 thru Friday, June 11 at the University of Oregon’s famed Hayward Field.

In Johnson’s first ‘Formchart #1″ on April 7, A&T was predicted to finish tied for eighth with Stanford and Arkansas with 28 points. In the second installment in early May 2022, the Aggies were 11th with 27 points.

The third chart by Johnson dated May 19, had the Aggies finishing fifth with 35 points.

The most recent formchart came after the Aggies qualified 11 men out of the East Region Preliminaries at Indiana University that concluded on May 28.

The 34 points NC A&T is predicted to score leading up to the final event will come from the following athletes, in Johnson’s estimation.

A&T junior Randolph Ross Jr., comes in with the best time in the 400 meters (44.23) that broke the East Preliminary record. He is predicted to win the event and take the 10 points that goes with it.

Johnson has sophomore sprinter Javonte Harding finishing third in both the 100 meters and 200 meters finals. Each of those finishes would garner 6 points each or 12 points overall. That would raise the Aggies total to 22 points.

What Johnson left out

Johnson thus believes that the other Aggies that qualified for this week’s championships will not finish in the money. They include senior Cory Poole and junior Aveon Reid in the 400 meter hurdles. Senior Rasheem Brown is in the 110 meter hurdles semis.

They would have to run close to their best times to get into the top eight and earn points.

Johnson also did not calculate the influence of head coach Duane Ross’s last meet leading the Aggies. The ultra successful coach is leaving after the NCAAs to lead the track program at Tennessee.

A super effort from an inspired Aggie contingent could send Ross out in a blaze of glory.