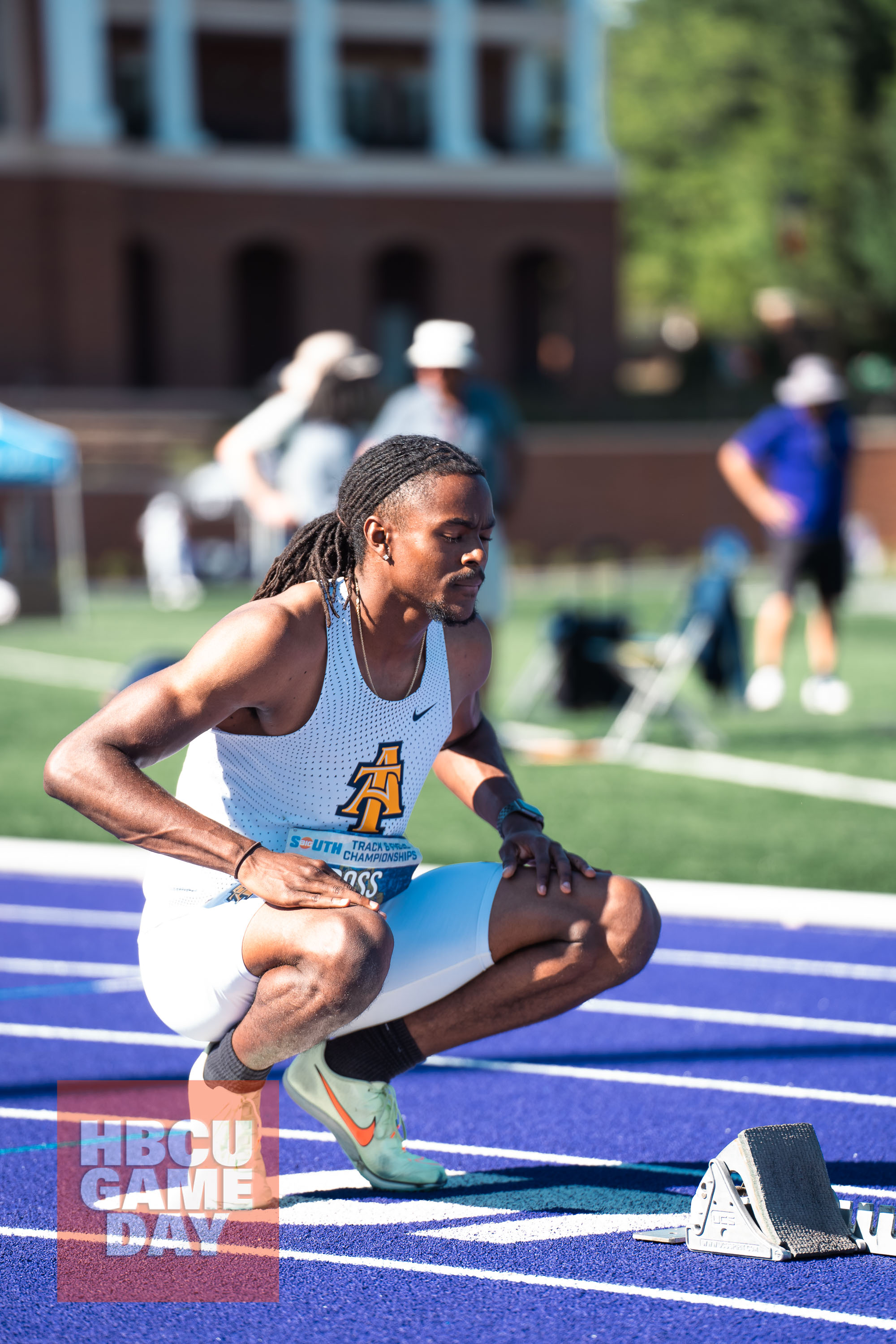 The NCAA Men’s East Regional is in the books and NC A&T track program once again has several athletes in the hunt for national titles.

Lindo missed qualifying for the 400-meter hurdles earlier in the day at the 2022 NCAA East Preliminary Round at Indiana University’s Robert C. Haugh Track and Field Complex. He came away from the race slightly banged up, leading A&T director of track and field programs Duane Ross to consider removing him from the 4×400-meter relay scheduled 80 minutes after the 400H.

Lindo and his teammates would not have. Lindo ran the third leg of that race, putting the Aggies in the lead against the nation’s top-ranked 4×400 team, the Florida Gators. The Gators did rally on the anchor leg to beat A&T in one of the more entertaining races of the night.

But Lindo’s fortitude epitomized the A&T men’s desire to come away with multiple event national championships and a team national title at the NCAA Track and Field Championships in Eugene, Ore., June 8-11.

They will have plenty of opportunities because sophomore Javonte’ Harding looked incredible, qualifying for nationals in three different events.

Likewise, Olympic gold medalist Randolph Ross Jr. performed like a gold medalist. He ran the fastest 400-meter time in the United States this year at 44.23 and will look to defend his 400m national title from last season.

And despite finishing second in the third heat of the 4×400, the Aggies looked poised to defend their national title in that event. In Oregon, the Aggies will compete for national titles in the 100, 200, 400, 110 hurdles, 400H, 4×100, 4×400 and long jump (Brandon Hicklin). The only individual event where more than one Aggies qualified was the 400H.

Senior Rasheem Brown will represent the Aggies in the 110H in Eugene. Brown made it on time after failing to qualify as an automatic qualifier by finishing in the top-3 in his heat. Instead, he finished fourth in the second heat by running a 13.63. But it was fast enough to rank him among the top-12 headed to nationals.

Meanwhile, Harding, the indoor 200m national champion, looks like a man who wants to grow his legacy at A&T. He started the day with a burst on the anchor leg of the 4×100 to sprint the Aggies to a win in the third heat (39.37), crossing just ahead of Liberty (39.38). Senior Tavarius Wright, Ross Jr. and senior Malcolm Croom-McFadden joined Harding on the 4×100 team.

Harding’s 100 looked even more impressive. He ran a personal-best 10.08 against the win to record the second-fastest quarterfinal time of the day, finishing behind Olympian and Florida Gator Joseph Fahnbulleh (10.04). He did not have to face the same wind.

“Javonte’ had a great day as we expected,” said Ross. “He’s a showtime competitor.”

Of course, you cannot talk showtime without talking about Ross Jr. His 44.23 broke the East prelim record his former teammate and Aggie alum Trevor Stewartestablished at 44.25.

Junior Aveon Reid and senior Cory Poole are going to NCAA nationals in the 400H. Reid earned his spot as an automatic qualifier, finishing second in his heat at 50.71. Poole is in the national 400H semifinals on time. He finished fourth in the first heat, but his 50.77 was fast enough to move on.

In June, Lindo and the other determined Aggies look forward to their rematch in Oregon.

“I think we had a very productive day,” said Ross. “We had some mishaps in the hurdles, but overall we were pretty good.”