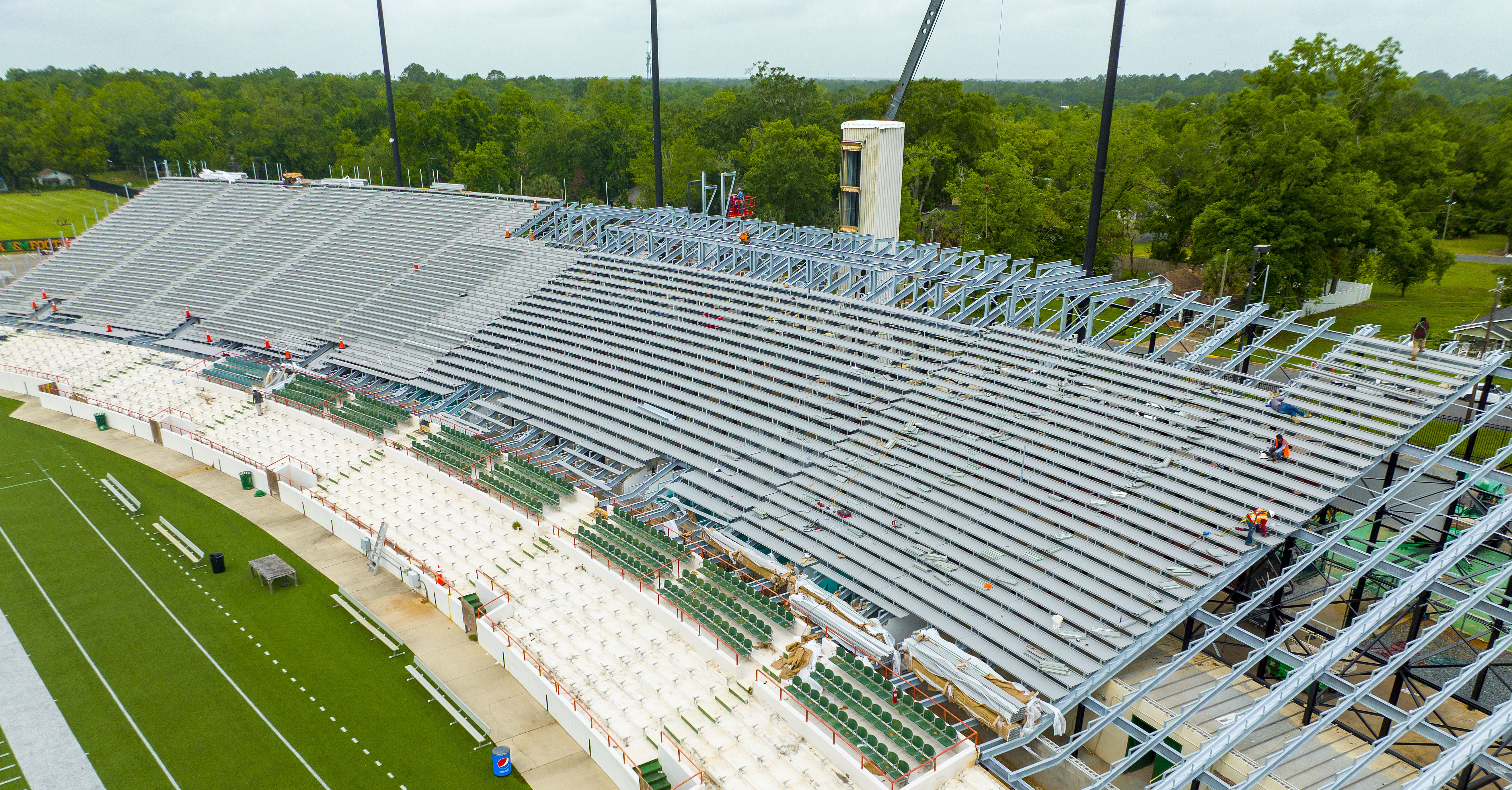 Bragg Stadium at FAMU was last renovated with completion in 1983

Florida A&M is currently in the second phase of renovations to Bragg Memorial Stadium.  The stadium’s east side bleachers and structure were completely redone in 2021.  The new construction replaced the old steel bleachers with lighter and louder aluminum bleachers.  The steel beams that hold the bleachers were sandblasted and coated with a coating that according to www.BraggRenovations.com will protect and strengthen the beams for the next 50 years.  The renovations of the east side, which is also the student side was done in plenty of time for FAMU’s home opener against Fort Valley State last season.

The west side of the stadium is considered the alumni side.  Season ticket holders on that side have been consistent season ticket holders for 30, 40 or even 50 years.  The west side renovations began at the conclusion of last season, but is a bit more complicated than the east side.  The press box was on the west side of the stadium.  While the standard bleachers are on pace to be completed in short order, as Allstate Construction, the contractor for the west side, is in full swing and proceeding perceptively well, the renovated skybox as it is being referred to has not been revealed in a public forum.

Bragg West, the official renovation site for Allstate Construction’s renovation of the stadium, revealed a platform on the upper tier of the west side, presumably the housing infrastructure for the new skybox.

Formerly the Bragg Stadium box was called a press box.  That’s because when it was last renovated in the early 1980s, its primary function was to house media, coaches, videographers and other media personnel.  In the previous press box, the end rooms were later renovated to accommodate the university president with a skybox for entertaining and cultivating sponsors and partners and the other end was for the athletic director, though significantly smaller, to do the same.  However, in 2018, the athletic director’s box was converted to the broadcast/media room as FAMU had to produce ESPN3 broadcasts internally as part of the MEAC broadcast agreement.  The space was converted to a full studio with HD broadcasting capabilities and a separate area to produce the scoreboard media during games.

In interviews on BraggWest.com, Allstate Construction personnel described what is to be expected in the new structure labeled a “skybox.”  On one of the interviews earlier this month, the skybox was said to have two “party decks.”  Exactly what that means was not elaborated on.  FAMU Interim Director of Athletics Michael Smith, interacting with alumni at a support organization meeting last week said that the seating would be altered on the west side of the stadium because of the new structure.  At that meeting, the athletics administration admitted that a couple thousand seats would be eliminated from Bragg Stadium’s west side inventory in the process.

Former FAMU AD said the suites would open to seating

While there has not been a rendering offered by FAMU Athletics or Allstate Construction, we do know for sure that the structure will be constructed off-site and attached to the newly seen anchoring system, which should deem it relatively simple in installation nature.  Allstate Construction has also mentioned that the new structure will be wired with infrastructure for updated multimedia amenities.