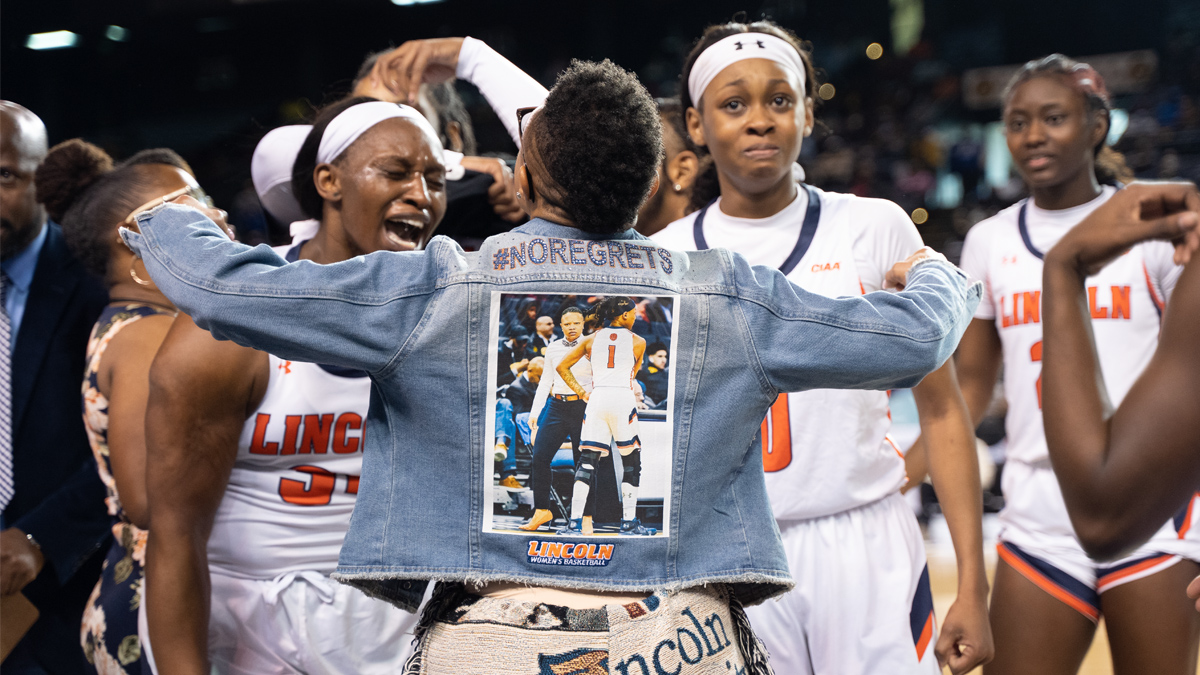 Lincoln University assistant Cherelle Dennis managed to honor Dawn Staley, a former player taken away too soon and her alma mater in one outfit.

Assistant coach Cherelle Dennis helped her team cut down the nets at Royal Farms Arena as the team completed a two-year journey to the CIAA title. She had turned heads all week with her eye-catching attire, and she saved the best for last on championship Saturday.

“Everybody knows CIAA time you got to turn the heat up, everybody’s watching you. All eyes on you,”  Dennis told HBCU Gameday in an exclusive interview. “People wanna know what you’re putting on. It is literally a process for me. It’s a lead-up, a build-up. I take it very serious, starting in January.”

Her championship attire consisted of custom orange heels with the Lincoln Lion logo on them, and a jacket honoring one of her players whose life was tragically cut short earlier this year. And then, there were the pants. Dennis’ pants featured a woven Lincoln University Lion logo as well as an embroidered photo of one of Staley, one of her idols. The pants were actually custom-made by a Lincoln University student.

“She is phenomenal at what she does,” Dennis said. “On those pants, Dawn Staley, who has been my role model since I started playing basketball along with the Lincoln logos again because again, I pride myself on representing this university at any cost.”

But even more personal for Dennis was the jean jacket she wore. The back of the jacket featured a photo of Dennis and DeAshia Young, a former Lincoln star whose life was cut tragically short less than a month before the CIAA Tournament.

“Two years ago, we had a thing and I would always tell the kid — no regrets,” Dennis said. “And even though we didn’t win, I know it was a lot of regrets that we didn’t because we felt like we had the team to do it. And so when they told me she passed away and how she passed away, it really was a hard time for me. Clearly is still is a hard time. It’s only been two months.”

Indeed, Young’s passing was tough for the program, but the players and coaches banded together and dedicated the rest of the season to their fallen teammate. The team wore shirts with Young’s photo on it as Dennis did her sideline tribute.

“And so it was only right that I put her on my back — because I noticed what she wanted. On the top, it had no regrets. And I knew that this year was going to be the year and she was a huge part of this program. So after that, we put our heads down and we said, we’re going to go do this for her.”

And that’s exactly what Lincoln did. Check out the video below for the full story.