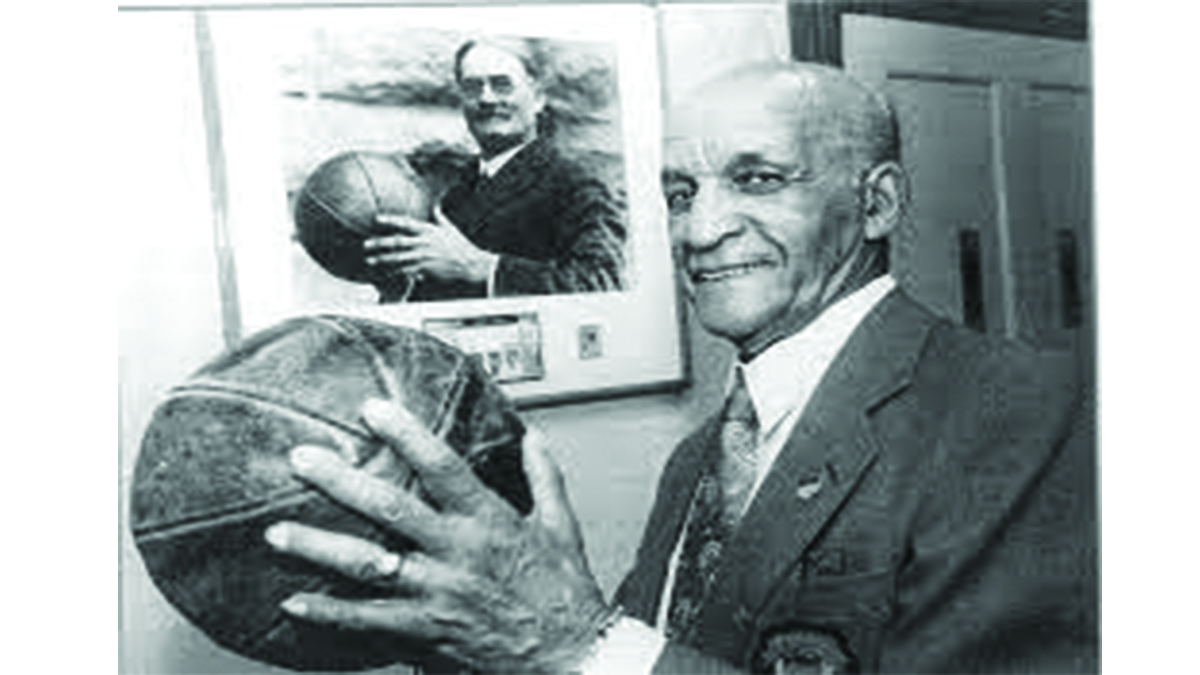 John McClendon learned the game of basketball from James Naismith (in picture frame), revolutionized it, helped found the CIAA Tournament and won its first title in 1946 at the beginning of a legendary career. The 76th Tournament tips off Tuesday.

The CIAA Basketball Tournament returns to Baltimore next week for the first time since 1952. That date predates me by a couple of years. Do the math and you’ll figure out how old I am.

It’s the first visit to what’s called “Charm City” in 70 years. The first time it was for just one year. This time its for a three-year stay.

The tournament – known for years as the C-I double-A – has travelled a circuitous route. It has gone up and down the mid-Atlantic region. The tourney began in Washington, D.C., moved to Baltimore for that single year, before starting a back-and-forth march from North Carolina to Virginia and back again before arriving at this year’s 76th affair.

After a 15-year sojourn in Charlotte, the tourney returns to the North and moves outside North Carolina for the first time in 27 years. The Tourney spent six years in Winston-Salem at the Lawrence Joel Veterans Memorial Coliseum (1994-99) and another six in Raleigh’s RBC Center (2000-2005) before the move to North Carolina’s Queen City.

The return North represents a pattern.

The Tournament, which was birthed in 1946, held its first seven tournaments in what is now called ‘the DMV’ (District of Columbia, Maryland and Virginia) – six in D. C. and one in Baltimore on the campus of Morgan State. It came South to North Carolina for a 23-year stretch beginning in 1953.

It stayed in Greensboro despite the exodus of six former members (Delaware State, Howard, Maryland-Eastern Shore, Morgan State, North Carolina A&T and North Carolina Central) after the 1970 tournament. They abruptly left the fold, to the chagrin of many, to form the Div. I Mid Eastern Athletic Conference.

That brings the Tournament to where it is today. If form holds true, after its three-year stay in Baltimore the tournament will stay somewhere in the North. If the move is successful, that place could certainly be Baltimore again.

B-More to the rescue

Baltimore is as far north as the tournament has ever been. The year in this new venue could not be more critical.

The 15 years in Charlotte were wonderful for the city but not so much for the conference. The CIAA was locked into a contract and arrangement that generated more money for the conference’s marketing partner, Urban Sports and Entertainment, than it made. While it appeared that the conference and the tournament were doing well, quite the contrary was true. The fallout led to the unexpected resignation of 18-year Commissioner Leon Kerry in 2011 and the unveiling of a $1.7 million operating deficit in 2012.

Charlotte became a “destination city,” with fans flocking from all over the country to be in the city, though many of them never stepped foot in the arenas, the Time Warner Cable Arena (home of the NBA’s Hornets) or Bojangles Coliseum.

Over the last decade, that conundrum has somewhat been rectified. Urban Sports decided to shutter its business and the league and tournament have taken on new business partners. The CIAA has also been proactive in taking over many of the marketing and ancillary activities.

A line-up of the 2022 official CIAA schedule of tournament events includes a list of shows (Legends of Hip Hop Vols. 1 & 2, Queens of Hip Hop), day and night parties, a step show and a comedy show. These events will run from Thursday through Saturday and all bear official CIAA designations.

There’s also a voluminous line-up of CIAA official events that present opportunities for families and fans of all ages.

The action was on the court

The CIAA Tournament built its reputation on scintillating basketball. Fans packed arenas from the league’s inception to see basketball played at a high level.

This is just what the quartet of enterprising and forward-thinking men – Morgan State’s Talmadge L. Hill, North Carolina College’s John McClendon, Hampton’s Harry R. Jefferson and Howard’s John Burr – envisioned when they birthed the tournament in 1946.

Early on, West Virginia State, who won back-to-back CIAA Tournament titles in 1948 and 1949, featured players like Earl Lloyd. He etched his name in hoops history books by being the first African-American to play a game in the NBA. Chuck Cooper, who played one season in the CIAA at WVSU before transferring to Duquesne, was the first African-American to be drafted by an NBA team.

“Tricky” Tom Harris’s Virginia Union team was a star attraction in the early days, winning four titles in five years (1951, 1952, 1954 and 1955). Those were the only titles he claimed during a coaching career that ended when he was tragically felled by a heart attack at the 1983 tournament in Norfolk.

Legendary coach Clarence “Big House” Gaines, who began his 47-year career at WSSU when the tournament was founded in 1946, won two tournament titles in 1953 and 1957 before going back-to-back with the dynamic Cleo Hill and his cohorts in 1960 and 1961.

Gaines and his Rams won another title in 1963 with 5-8 guard Theordore “Teddy” Blunt as his star and tournament MVP.

Though the CIAA had as many as 17 teams at one time, only the top eight would get invites to the tournament. That made the three-day competition (quarterfinals, semifinals and finals) hot and heavy. There were very few blowouts or boring games

I went to my first CIAA Tournament at the Greensboro (N. C.) Coliseum in 1964 at the age of 10. Coming from my home in Danville, Va. right on the North Carolina/Virginia line, the drive to Greensboro was only forty-five minutes away. Greensboro was literally right next door. I was fortunate that my father, J. L. Williams, an attorney in Danville, was a big sports fan and lover of CIAA basketball. That is how I got there.

Part II explores how in the mid- to late- 1960s, amidst a volatile environment, a list of legendary coaches, players and scintillating games made the CIAA Tournament ‘the place to be.’