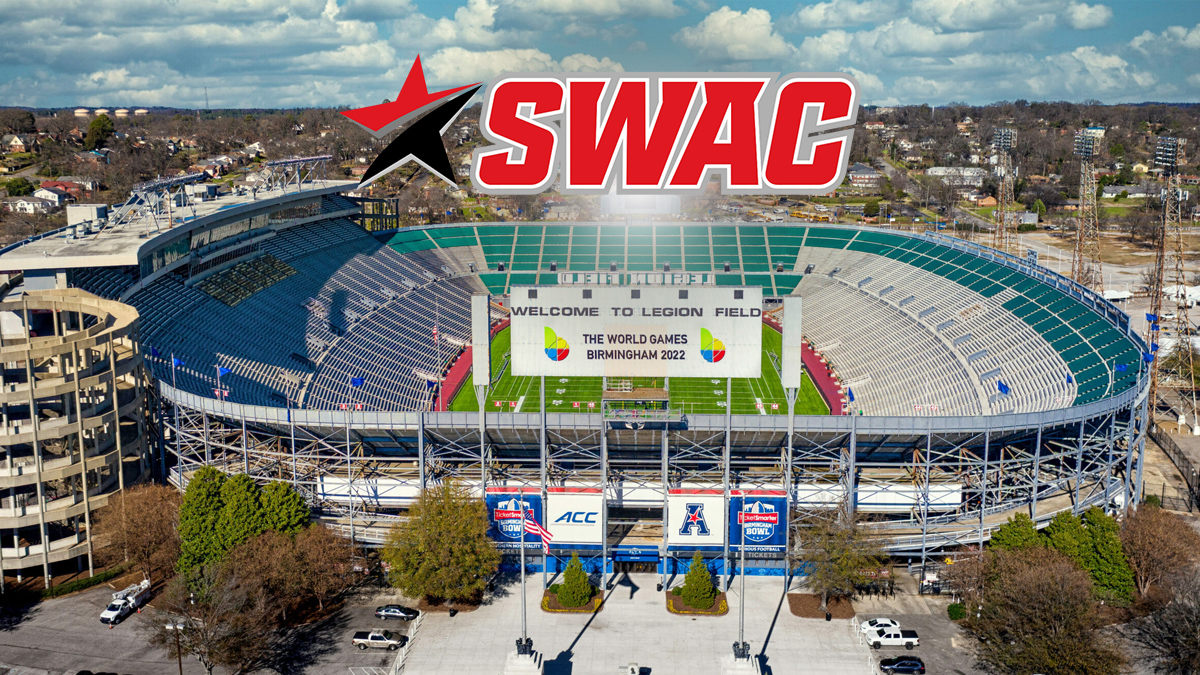 The SWAC is using its relationships in Birmingham to create significant new revenue streams for three programs.

The SWAC has never been afraid to go against the grain when it comes to its football brand. It did so again, in the eyes of many, when it announced a plan to bring three games between conference members to a neutral site.

Birmingham’s venerable Legion Field will serves as the site of three games featuring SWAC schools over the next three years. Jackson State will be involved in all three, playing Arkansas-Pine Bluff in 2022 and Southern in 2023 and 2024. The move has ruffled the feathers of many fans, particularly at JSU and Southern.

SWAC Commissioner Dr. Charles McClelland discussed how and why the conference got involved and explained why the deal in Birmingham was the best thing that could have happened and is a potential Gameplan. You can view the entire interview with our Tolly Carr on Youtube or listen to it in podcast form.

Here are a few of the highlights from the exclusive interview.

Jackson State and Southern reached out to the SWAC

The SWAC is not in the business of putting on football games. We do championships and all 18 sports. But when we signed the deal with Birmingham about three years ago, they gave us a unique opportunity and that was to be able to utilize Legion Field and the ability to utilize these feel at no cost, which means that the operational costs of putting on the game, the security, ticket takers, things of that nature would be waived. So we gave this opportunity to our membership and say, if anybody is interested in a neutral game, you know, we have the relationships with Birmingham to do so.

And part of it, in turn, was our schools are going out and they’re playing these game guarantees. They’re getting hurt, they’re bringing back a substantial amount of money, but there are opportunities for us to be better. So when Florida A&M and Bethune-Cookman came into the SWAC, the membership agreed to keep an eight game schedule. So with the twelve teams and keeping our eight-game schedule, that means that we have to have a rotational event to where a team will come off of your schedule for a two-year period and it goes through —  from a east standpoint —  those Western teams will come off or from a west, the east will come off. So in 2023 and 2024, Jackson State and Southern is rotating all of the schedule, and there were conversations with athletic directors from understanding about playing the game.

But they had some difficulties in getting that game scheduled. So they both reached out to the conference office and said, Hey, is the opportunity at Birmingham still available? So we in turn went to the leadership. Where would there has been a tremendous partner of the Southwestern Athletic Conference and he said yes. So long story short, we went to the City Council. We made a pitch to say we do have some opportunities for teams to come and they put together a package. So the benefit , in my opinion, to this package and I know the city of Birmingham released it, you know, they’re putting up $300,000.

Game-changing money on the table

So, you know, we’ve heard some of the concerns about why would you take a home game or move it to a neutral location one in the instance of Southern and Jackson, they were having difficulties and getting his game scheduled. So a situation where the game might not have occurred at all unless we get to a neutral situation. And you know, these numbers are preliminary, but based upon the money the city has put in and sponsorships right now, today, if they played each school, walk away, what about a half a million dollars. We think 30,000 in the stadium each school per year will walk away with about $1.5 million per year, so that’s 3 million over a two year period. And if we could really do well, get 60,000, you know, that’s about a 3 million dollar per year hit.

If those schools held that game on their whole campus, they would have to pay expenses and the revenue would not be nearly as what they would be able to get from this game. So it was an opportunity for us to try to expand. We want to change the way that business is being done. The third parties that come in and take the revenue, we think all of that revenue to go to the schools and this was an opportunity for for that to happen.

And I can’t give you all of the tea and announcements, but, you know, working on a full time media deal, that’s going to put a significant amount in it.

Birmingham is the plug

“The Southwestern Athletic Conference now is strong and is vibrant, and people are coming to try to get out. And the city of Birmingham stepped up not just with the dollars, but I cannot understate to have a facility where you can seat 70,000 and walk away with 100 percent of the ticket sales. So this is not a deal in which SWAC office is brokering and going tto get money. All of the revenue goes to the membership.

And again, when you start talking, you know, a home-and-home, they say they were able to get the home-and-home worked out. That meant Jackson was going to get money for one year, Southern was gonna  get money for one year. In this deal, they would be able to make equal or more in each year in a two year timeframe that they would have been able to make in a one year deal. So we thought that it was a good deal. We wanted to respond to the request of the membership and we think that this is a really good day for the software athletic conference at its member institutions.

We understand that the Southern-Jackson State game is a big game. We understand that it is an economic driver for the member institutions, but this is an opportunity for them to get paid in both years and get paid significant in both years. No conference game, no game with a third party will have the ability for us to be able to do what we’re doing from a financial standpoint. And that is when you start talking about expenses. Tolly, even from a Jackson State perspective, we put a game on Jackson State (the SWAC Championship Game).

It’s very, very expensive to put a game, you know, our expensive for the championship ran somewhere in the $200,000 range. So to be able to come with no expenses, ten $15,000 to travel and be able to put that significant amount of revenue for a game that was falling off schedule we thought was significant.

And again, I wanted to reiterate the school said, Hey, we want to play the game. We’re having some difficulty. Can you help? And I would like to send a shout out to the city of Birmingham for putting together a deal that would significantly change the way business is done when it comes to these black college football.