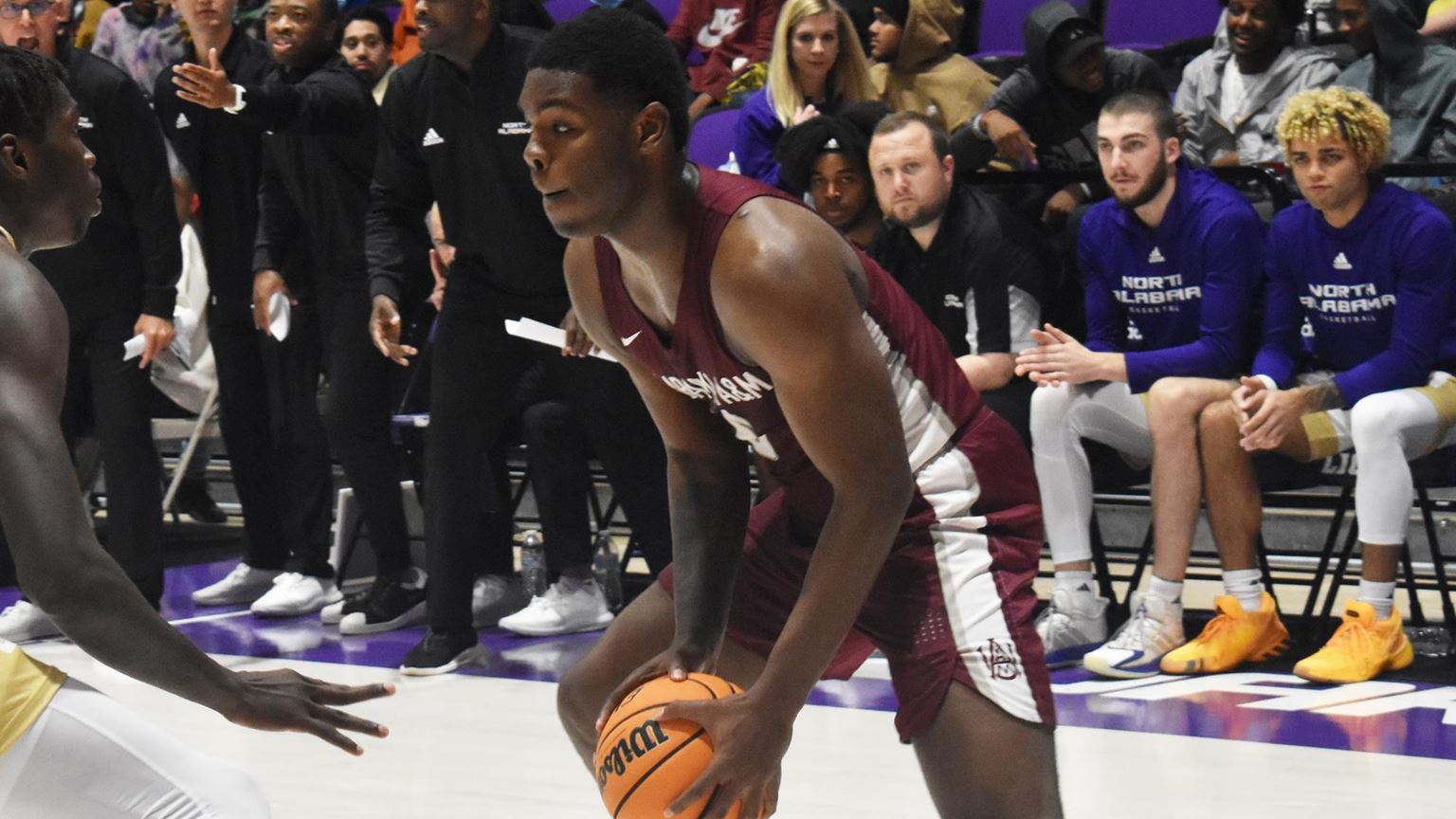 Alabama A&M forward Jalen Johnaon has tallied 16 and 25 points in two wins for the Bulldogs this week, the early leaders in the SWAC men’s hoops race. A&M is on the road at Alcorn State Saturday and Jackson State Monday. Check out all the latest SWAC hoops news here.

SWAC basketball, after a week of cancelled men’s games into the new year, appears to almost be back in full swing. Nine of the 11 games on this week’s schedule so far have gone off without a hitch.

All but Prairie View A&M

Byron Smith’s Panthers, picked to finish behind Texas Southern in the preseason voting, had to forfeit games against Grambling State (on Mon, Jan. 2) and Southern (Wed., Jan. 5). The team has now cancelled its last five games dating back to a Dec. 28 meeting at Valparaiso.

With its forfeit win over Prairie View, Southern (7-7, 2-0 SWAC), following its 63-50 win over Texas Southern on Monday, is tied at the top of the conference standings with Alabama A&M.

In the win over conference favorite TSU, Murray State transfer guard Brion Whitley came off the bench to lead Sean Woods’ Jaguars with 15 points. Six-seven senior swingman Jayden Saddler and NC A&T junior transfer Tyrone Lyons had 14 and 11 points respectively. Karl Jordan led TSU with 15 points off the bench. Lyons is currently fourth in scoring in the SWAC at 14.2 points per game

Southern is at Florida A&M (2-10, 0-1) Saturday and at Bethune-Cookman Monday. TSU hosts Arkansas-Pine Bluff Saturday and plays at MVSU Monday.

Bethune-Cookman is on its Louisiana swing at Grambling Saturday (3 p.m.) before hosting Southern Monday (6:30 p.m.).

Johnson, a first team all-SWAC preseason pick, came back to can 11 of 19 shots to finish with a game-high 25 points in the win over MVSU. He added a game-high 14 rebounds while Williams posted a double-double of 10 points and 10 rebounds. Three other of third-year head coach Dylan Howard’s Bulldogs scored in double-digits. Six-six sophomore forward Dalin Smith (6-7) had 15 points and six rebounds, while 6-foot junior guards Garrett Hicks had 14 points and Cameron Tucker had 11.

The Braves (2-11, 1-0), under second-year head coach Landon Bussie, shocked Jackson State Wednesday, 65-50. Alcorn was led by a career-high 22 points from Lenell Henry. The 6-8 grad student made 8 of 12 shots from the field including 4 of 5 3-pointers. Dominic ‘DJ’ Brewton had 14 points on 5 of 7 shooting. Six-foot grad student Justin Thomas added nine. It was the first win for Alcorn over JSU since the 2018.

Henry, a Prairie View transfer, has decided to spend his final year of eligibility with Bussey for whom he played for when Bussey was an assistant with the Panthers. Lenell and Bussey were with PV as they won back-to-back SWAC titles in 2019 and 2020.

Alcorn had struggled through a non-conference schedule that included all 12 games on the road including dates at Oklahoma, NCAA runners-up Gonzaga and NCAA defending champion Baylor.