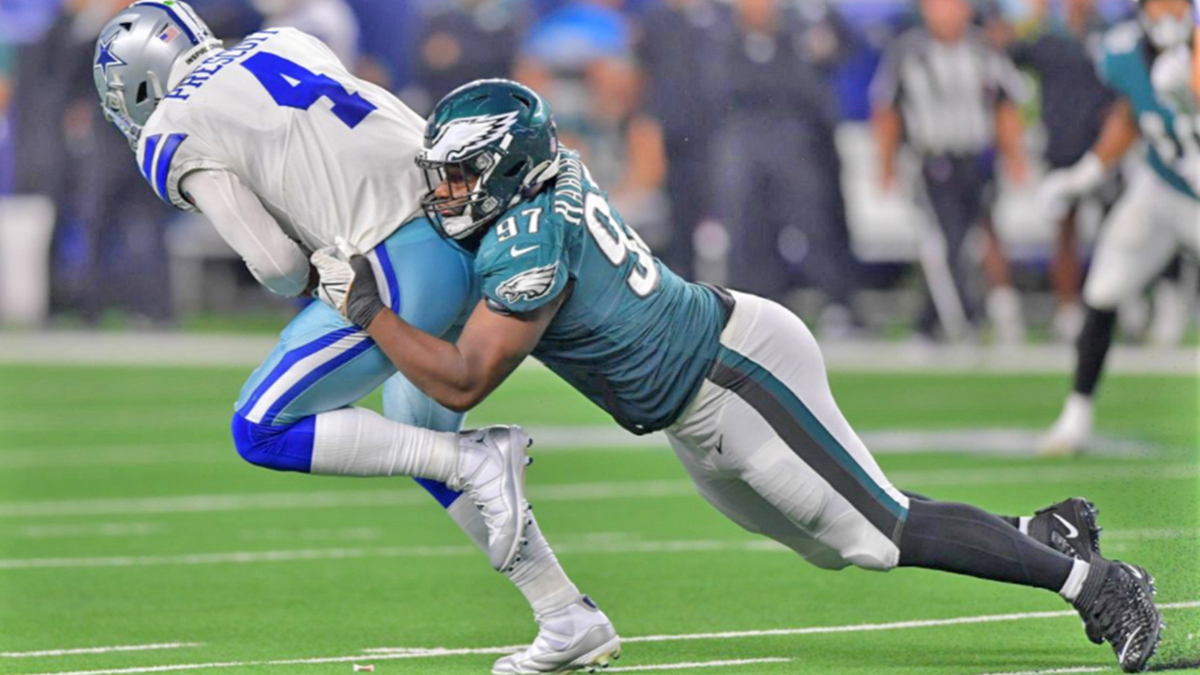 Javon Hargrave was a force and a menace to Dallas Monday, notching two sacks and a forced fumble in the end zone that the Eagles recovered for a TD. Check out all the HBCU standouts from Week 3 of the NFL season.

The HBCU NFL ProFile this week (games of Sept. 23-27) is full of acton as former black college players made big-time plays on offense, defense and special teams.

While Javon Hargrave (defense), Chester Rogers (offense) and Trenton Cannon (special teams) were the standouts, others like Khadarel Hodge, Darryl Johnson Jr. and Mac McCain III got into the fray for the first time.

On the flip side, there was some not-so-good news for all-Pro tackle Terron Armstead. He left Sunday’s game against New England in the first quarter with an injury.

– #97 JAVON HARGRAVE, DT, Philadelphia (6th season, SOUTH CAROLINA STATE) – In 41-21 loss to Dallas Monday, Hargrave was a force, credited with six total tackles, five solos, two sacks for -8 yards and a forced fumble. The forced fumble led to a first quarter touchdown by Fletcher Cox. Additionally, Hargrave’s play was also critical on an Eagles’ goal-line stand. He was in on 50 plays on defense (65%) and two plays (7%) on special teams.

– #80 CHESTER ROGERS, WR, Tennessee (5th season, GRAMBLING STATE) – In 25-16 win over Indianapolis, Rogers caught one pass (two targets) for a 6-yard touchdown that opened the scoring for the Titans. On special teams, he returned three punts for 44 yards (14.7-yard average) with a long return of 18 yards. The Grambling product logged 28 plays on offense (41%) and four plays on special teams (17%).

– # 72 TERRON ARMSTEAD, LT, New Orleans (9th season, ARKANSAS-PINE BLUFF) – In 28-13 win over New England, Armstead started at left offensive tackle and played eight plays (13%) before going out with an injury to his left elbow. The injury occurred when RB Tony Jones Jr.’s helmet collided with his left arm during a first-quarter run. Initial reports indicate Armstead could miss several weeks. The injury is not anticipated to end his season.

– #33 ANTONIO HAMILTON, DB, Arizona (6th season, SOUTH CAROLINA STATE) –  In 31-19 win over Jacksonville, Hamilton had a fumble recovery and one assisted tackle on special teams. He only played on special teams logging 21 plays (72%).