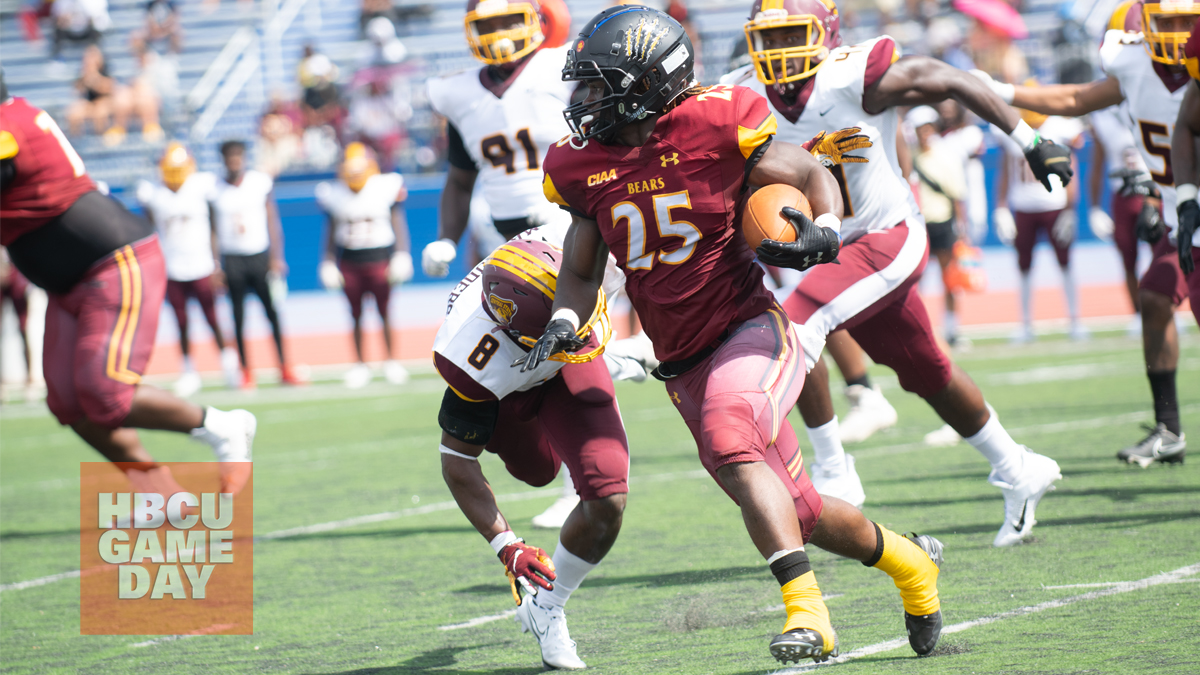 Shaw blows out, shuts out Central State in home opener

Shaw returned to Raleigh for the first time in nearly two years and got a blowout win, shutting down Central State of the SIAC.

Raleigh, NC – The Shaw Bears put on a show for their home crowd in their first home game in almost two years as they shut out the Central State Marauders 52-0 Saturday afternoon at the George Williams Athletic Complex.

Shaw improves to 1-2 on the season while Central State drops to 1-2 overall.

The Bears couldn’t have asked for a better start with the defense forcing a quick three and out. On the first play from scrimmage, Sidney Gibbs spined outside and took the handoff 58 yards for a touchdown putting Shaw ahead 7-0 with 12:29 left in the 1st quarter.  Shaw forced another CSU punt on their second possession.  Facing a third and long situation, Christian Peters found Ah’Shaan Belcher who carried a few defenders with him down to the Marauders 32-yard line.  Three players later the Peters–Belcher connection cashed in from 14 yards out. Devin Versteegen added the PAT to make the score 14-0 in favor of the Bears with 3:53 remaining in the opening quarter.

After a decent return set up CSU in good field position, Da’Shawn Wallace ended the threat with an interception at the Shaw 16-yard line keeping the score at 14-0 at the end of the first quarter. Shaw pushed their score to 21-0 with an Andre Brandon Jr. one-yard score with 5:27 left in the half.  Peters found the endzone again just before the half connecting with Jon Barnes from four yards out pushing the SU lead to 28-0 at the break.

Jermaine Russel opened the second half with a big kick return up to midfield. The Bears needed little time finding the endzone as Peters scored from 20 yards out on third down with 11:21 left in the third quarter. The Shaw special teams got in on the action with a Jatoine Fields blocked punt that was returned for a touchdown by Jon Barnes putting Shaw ahead 42-0.

Jaleel Scroggins gave the ball back to the Bears with an interception and return to the 10-yard line. Shaw was kept out of the endzone, but Versteegen added his first career field goal from 23 yards out making the score 45-0 in favor of Shaw. Jatoine Fields got in on the scoring action with a one-yard score that featured nothing but runs by Fields padding the Shaw lead to 52-0 producing the final tally.

Peters finished the day 13-17 through the air for three total touchdowns. Gibbs led the rushing attack with 150 yards on 14 carries and one score. The SU offense outgained Central State 487-203 while the defense pitched their first shutout since shutting out Winston Salem State 21-0 on November 2, 2019.

Shaw returns to action Saturday, September 25 when they open CIAA action against Lincoln (PA). Kickoff is slated for 1 p.m.

Shaw blows out, shuts out Central State in home opener