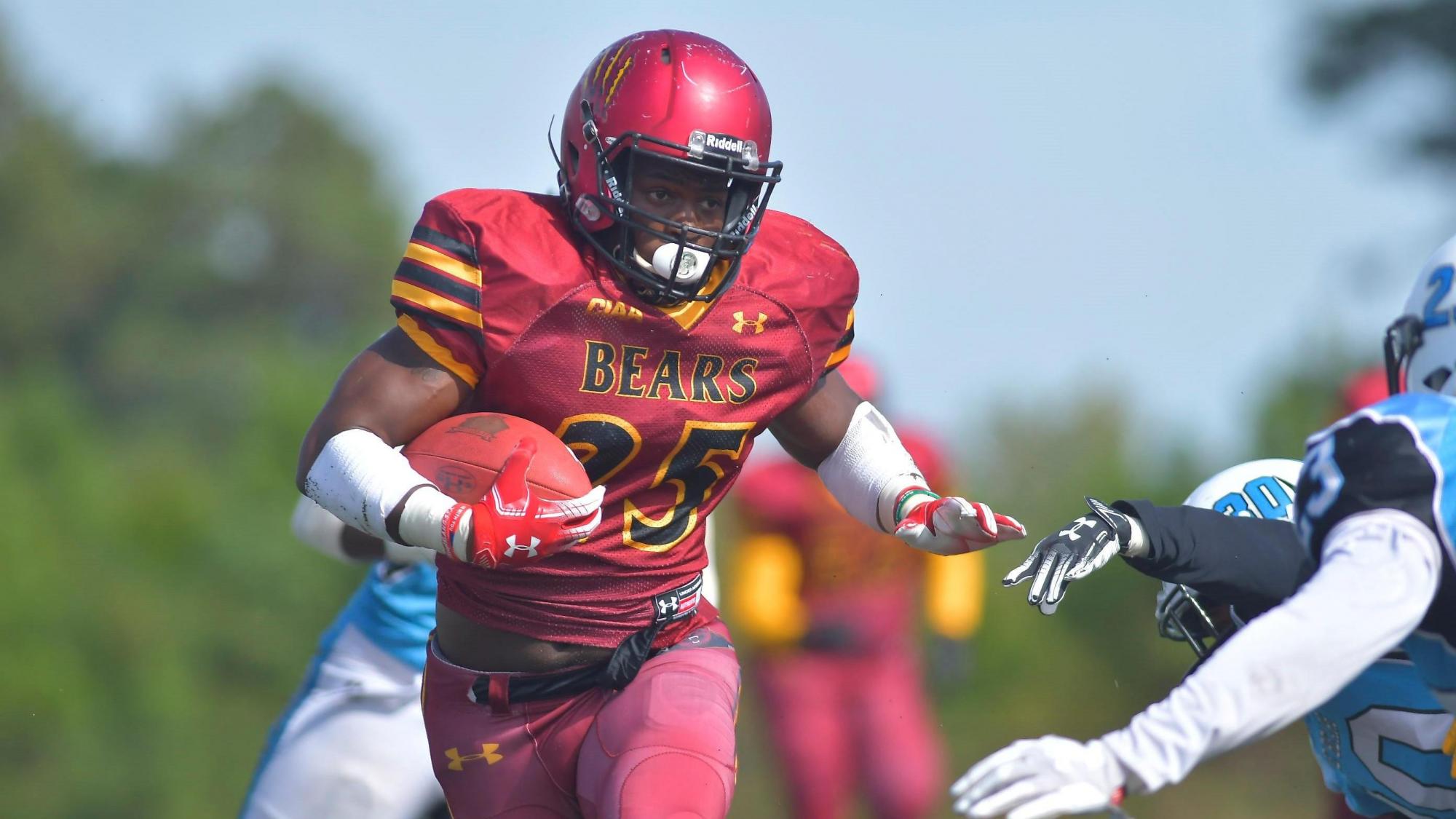 The Shaw University football team fell on the road to #24 Wingate in the 2021 season opener 30-7 Thursday evening inside Irwin Belk Stadium in Wingate, NC.

Shaw falls to 0-1 on the early season while Wingate improves to 1-0.

The Bulldogs outgained the Bears in total yards 393 to 188. Christian Peters provided a spark off the bench finishing 10-14 passing for 59 yards while also leading the Bears in rushing with 75 yards on eight carries and one touchdown. Devon Hunt led the way on defense with nine total tackles followed by Da’Shawn Wallace with seven tackles. Kareem Butler came away with an interception in his college debut.

For the first time in almost two years the Shaw took the field after a touchback. The Bears would be stopped short on third down but a penalty on Wingate kept the drive alive.  Nothing would come from the second chance as Shaw would again punt the ball away.

Wingate took the ensuing punt down the field in 10 plays going 66 yards scoring on first and goal after a facemask penalty on third down put Wingate ahead 7-0 with 7:54 left in the first quarter. Following another Shaw punt, the Bulldogs offense again moved the ball down the field scoring on a 16-yard pass play pushing the Wingate lead to 14-0 with 2:46 remaining in the opening stanza.

Both teams then traded punts as the Shaw defense forced their first three and out of the game making the score 14-0 at the end of the quarter.

A promising Shaw drive that featured a 22-yard Sidney Gibbs rush was halted by a sack resulting in a 54-yard punt from Karlton Byrd Jr, Wingate started another drive which reached the Shaw 23-yard line before freshman linebacker Kareem Butler intercepted a tipped pass returning it back to the Shaw 36 yard line with just over 11 minutes left in the half. The Bears would be unable to convert the turnover into anything positive as another Byrd punt followed with 9:31 left before the break.

The Wingate offense responded with a 10-play drive resulting in a six-yard run to extend the Shaw deficit to 21-0 with 5:13 on the clock in the second quarter. The Bears would make a switch at quarterback putting in Christian Peters who sparked a Shaw drive inside the Wingate 30 but would come to a stop after a fourth down stop by Wingate leaving the score 21-0 at halftime.

Both teams traded punts to open the second half before the Bulldogs turned their second offensive possession into the points with a 20-yard FG extending their lead to 24-0 with 6:15 left in the third quarter. Neither team would score the rest of the period.

Wingate added another short touchdown with 14:15 left in the game making the score 30-0 in favor of the Bulldogs.

Peters reentered the game and took a read option and hit paydirt from 59 yards out. Devin Versteegen added the PAT making the score 30-7 with 12:26 left in the game. Punts were traded the rest of the game with Wingate coming away with the 30-7 victory.

Shaw will return to action Saturday September 11 as they travel to FCS Davidson College. Kickoff is slated for 6 p.m.