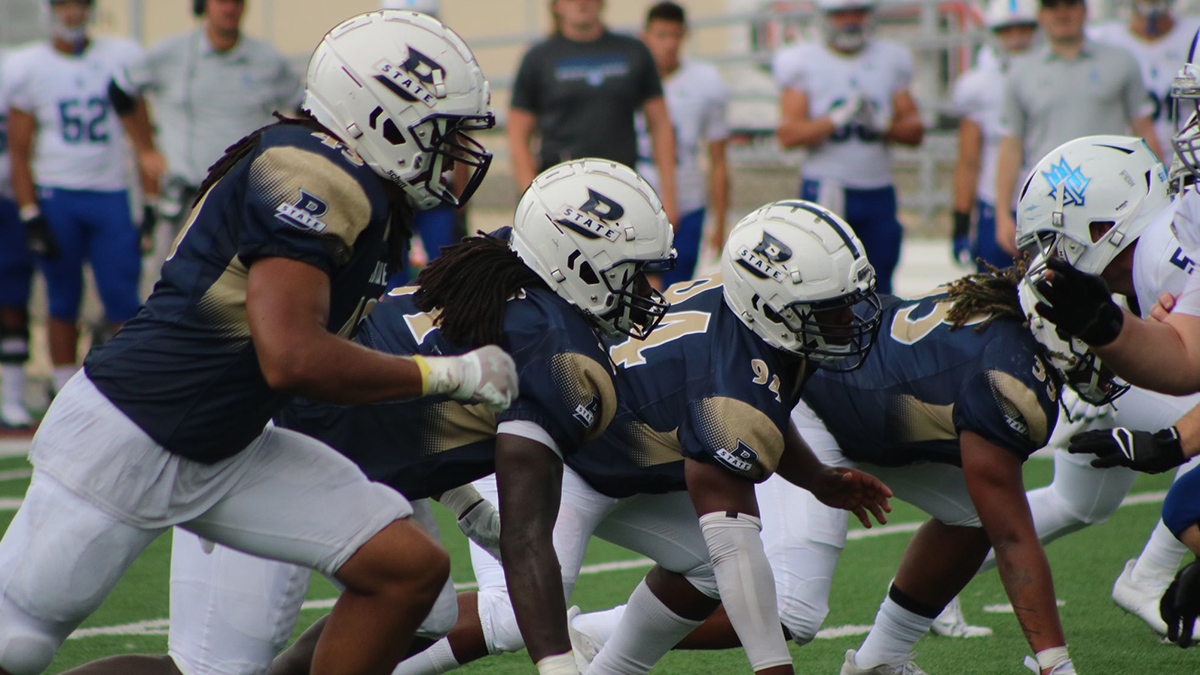 Less than a year after announcing its intention to play football, Bluefield State has its first win since the 1980.

Bluefield State College, an HBCU in West Virginia, just restarted its football program in 2020.  Last week, it played its first game in over 41 years.  It only took two games into the modern era to notch its first win, as BSC defeated Elizabeth City State 35-27.

Early on, it looked like the hosts would run away with this game, with ECSU scoring on a 36-yard Josiah Hayes punt return and a Zion Riddick catch from De’Abrie Smith.  BSC’s Braxton Vanscoy fumbled the ball deep in their own territory, and ECSU’s Kaezahn Johnson scored on a 25 yard fumble recovery.

Bluefield State rallied from a 21-0 first-quarter deficit with three scores of their own in the second period.  Quarterback J’rell Joseph passed for his first of four touchdowns of the game to Kenta Jefferson.  His second touchdown pass came in just one play for 75 yards to Perry Wilder.  BSC scored again when Joseph found Berkarion Black from 15 yards out.

ECSU had an opportunity to extend their lead in the second quarter, but a costly personal foul penalty pushed ECSU back 15 yards when they were in a first and goal scenario.  Instead, ECSU broke what became a tie in the third quarter when Smith found Brandon Joyner for an 80 yard touchdown strike.

The fourth quarter is where BSC began to flex.  BSC was able to drive down the field early in the fourth, but turned the ball over on downs at the ECSU 2.  BSC’s Justin McElveen intercepted a Smith pass and returned it to the ECSU 1, and Markaden Bryant cashed in two plays later for a touchdown.  The turnover bug bit ECSU on the next drive with Smith being intercepted by Eshawn Carter.  Joseph would later find Black for an eight yard touchdown pitch and catch.

ECSU had an opportunity to retake the lead. The following drive after BSC’s score saw ECSU drive to the BSC 5, but then the drive stalled and the Vikings turned the ball over on downs.  BSC’s next drive resulted in a 16 yard punt, and meant that ECSU would start its next drive in the redzone.  Kevin Caldwell, who came in to relieve Smith, proceeded by throwing an interception of his own, this time to Xavier Curry.  A final ECSU drive with 21 seconds left ended with a failed hail mary attempt.

Three equalizers existed in this game. First, ECSU committed costly penalties. ECSU aided BSC’s first score by committing a pass interference infraction on a third down play.  BSC collected four first downs because of penalties. Overall, ECSU committed 13 penalties for 137 yards.  Conversely, BSC only had five penalties for 44 yards.  Secondly, the Vikings also committed four turnovers, including three interceptions and a lost fumble, and that unfavorable compares to BSC’s one turnover. Lastly, BSC held a significant advantage via time of possession, as BSC held a 37-23 minute time of possession advantage.

BSC’s Joseph completed 19 of 35 passes for 232 yards and four touchdowns in the winning effort.  Bryant added a rushing touchdown and 50 yards rushing.  ECSU’s Smith completed 14 of 27 passes for 185 yards, two touchdowns, and two interceptions.  Wide receiver Zion Riddick paced the passing attack with eight receptions for 91 yards and a touchdown, with fellow wide receiver Brandon Joyner nabbed two receptions for 83 yards and a touchdown.  Defensively, Xavier Curry lead the BSC effort with nine tacklers, 2.5 tackles for loss, half a sack and an interception.  Erick Mejia’s nine tackles lead ECSU’s defense, along with Raevon Freeman’s seven tackles and 1.5 tackles for loss.

Bluefield State is an HBCU located in Bluefield, WV. The HBCU is predominately white as is West Virginia State.

BSC (1-1) travels to another HBCU in the CIAA Johnson C. Smith next week. JCSU (0-1) faltered late to Allen. That game is scheduled to be on the CIAA Sports Network (ciaasn.com).  ECSU travels north to take on local rival and Division 1 foe Norfolk State (0-2) next week.

2.1K
The Latest in HBCU Sports and Culture