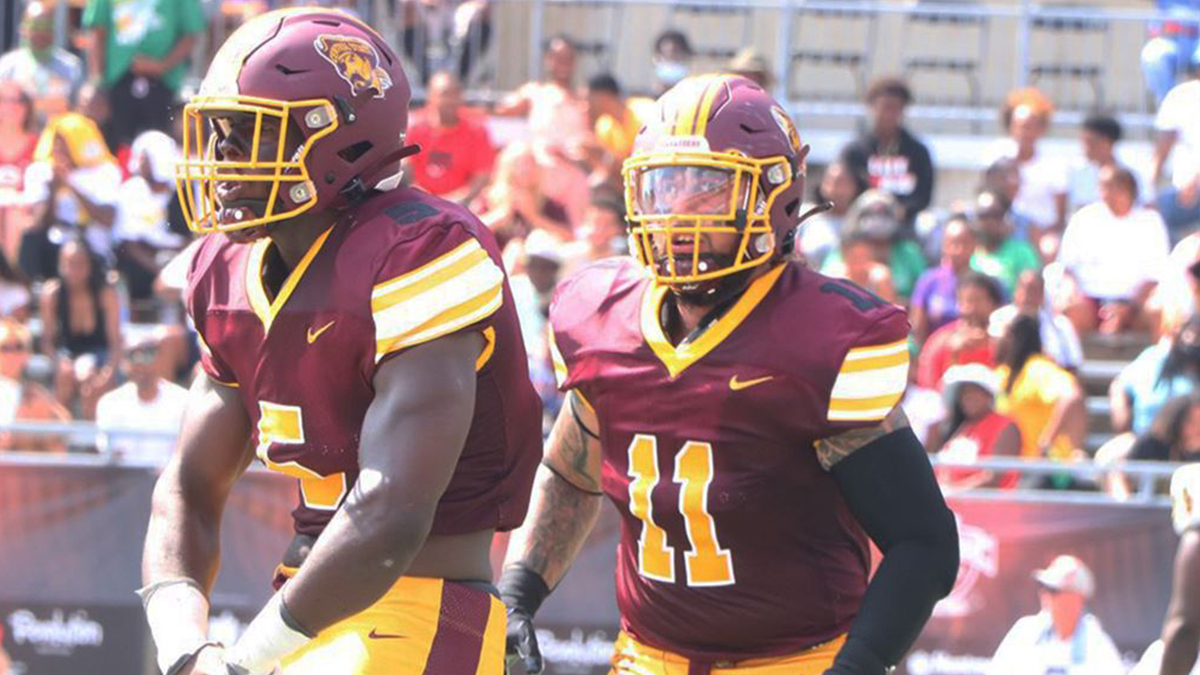 Central State rebounded from a tough loss to Kentucky State in its opener for a win over Lincoln of the CIAA.

The Central State football team had just about two weeks to regroup after their tough loss to SIAC rival Kentucky State in the Classic for Columbus to open the season.

Unfortunately, CIAA member Lincoln was the team who the Marauders took their frustration out on, riding a stifling defensive effort to a 19-7 win at Coatesville Memorial Stadium Saturday afternoon.

“That Kentucky State game was a tough loss for us,” said UNLV transfer defensive lineman Jamal Holloway, who led the Central State defense with 13 total tackles, two sacks and a forced fumble. “We wanted to come out today and make an impact – get in the backfield, get some sacks and get some tackles for losses.”

“We really challenged those guys to step it up and they did today,” added Bobby Rome II, who picked up his first win as CSU head coach. “Jamal and his teammates are great football players, so we put it on them and they played outstanding.”

Playing not too far away from his hometown of Camden, NJ, Holloway made an early impact, sacking Lincoln starting QB Isaiah Wilson V and forcing a fumble that linebacker Khaled Wahezi fell on at the LU 16. First-year running back Damonte’ Dunlap scooted around left end three players later for the second Central State touchdown of the first quarter.

Looking for a spark, Lions head coach Josh Dean turned to true first-year QB Andrew Banks and the Georgia native provided it with a second quarter scoring drive, capped by Banks plowing through Central’s tough defensive line for a 3-yard touchdown run that cut the Marauder lead to 13-7.

Banks completed 16 of 22 passes for 157 yards for the afternoon.

The score remained 13-7 until early in the 4th quarter, when Lincoln (0-2) was poised to take the lead after an exciting interception and return by first-year DB Rontay Dunbar. Central State’s defense once again was equal to the task, with a fourth-down stand near midfield turning momentum back in the Marauders’ favor.

After a 49-yard pass play from Siaosi Amaya to Dalaine Brown II got CSU in Lincoln’s red zone, Amaya provided some insurance with a 7-yard touchdown pass to Said Sidibe to cap the scoring. Amaya completed 10 of 24 passes for 123 yards, a touchdown and also ran for a touchdown before leaving the game with an injury.

For Josh Dean, the disappointment was evident, but he sees reason for hope.

“Of the 39 points we’ve given up in two games this year, 20 to 25 of those have been off of turnovers,” he explained. “Our defense has played well each week, we just have to find a way to score some points. We’re getting closer to where we want to be.”