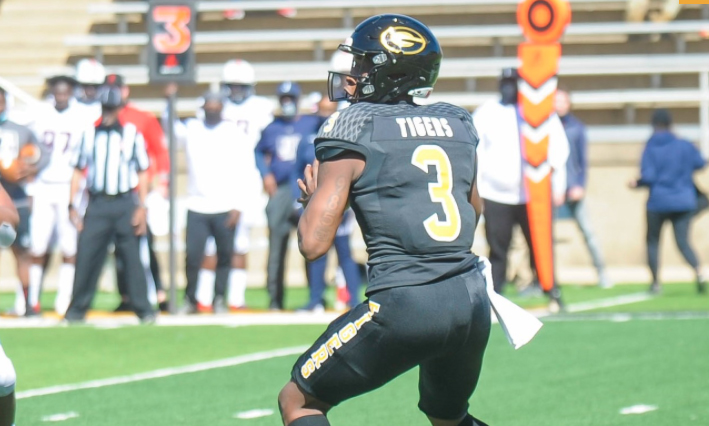 CANTON, OHIO – The debut of Tennessee State head coach Eddie George Sunday did not go so well as his Blue Tigers committed 18 penalties for 150 yards but still had their chances before falling to Grambling State 16-10 at the Black College Hall of Fame Classic in Canton, Ohio.

It was a defensive, grind-it-out game as the teams combined to pass for just 161 yards and rushed for less than 150 yards each.

Grambling QB Elijah Walker (4-11-1, 43 yards) threw an 18-yard scoring pass in the second quarter to Jaye Patrick and ran 17 times for 85 yards including a 4-yard  TD run in the third quarter. GSU placekicker Urban Garrett kicked a 24-yard field goal in the fourth quarter for the game’s final points. Walker was named the game’s offensive MVP.

TSU placekicker Antoinio Zita hit on a 39-yard first quarter field goal to give the Blue Tigers an early 3-0 lead and running back Devon Starling ran for a third-quarter 3-yard TD run. That was all the points TSU could muster as penalties killed their drives. Tennessee State outgained Grambling 230 to 184 yards.

“I couldn’t be prouder of our men,” said George of his team’s effort. “We overcame a lot the last couple of weeks. They were resilient. A lot of the things that cost us the game are definitely correctable. We will keep our head down and keep going.”

Former GSU QB Geremy Hickbottom platooned at quarterback for TSU with Tucker Pope and Deveon Bryant. Hickbottom was the most effective completing 8 of 10 passes for 65 yards and had one carry for 8 yards.

Patrick’s touchdown followed a 15-play, 79-yard drive, which took over seven minutes off the clock. The score gave Grambling a 7-3 advantage with 12:41 left in the second quarter.

TSU had an opportunity cut the margin right before halftime, but Zita’s 57-yard field goal attempt was short as Grambling State entered the break with the 7-3 lead.

After a GSU punt to begin the second half, Tennessee State drove 35 yards in 13 plays as Starling scored on a 3-yard rushing touchdown, giving TSU a 10-7 advantage with just over seven minutes remaining in the third.

GSU’s defense and special teams provided a huge spark toward the end of the third. After a sack, TSU’s Kaleb Mosely’s punt was partial blocked and three plays later, Grambling State punched the ball into the endzone. Walker’s 4-yard touchdown run gave GSU a 13-10 advantage as the extra point attempt failed with 2:22 left in the third.

GSU added one more final score with 9:48 remaining as Urban booted the 24-yard field goal extending the lead to 16-10.

QUOTES FROM HEAD COACH BRODERICK FOBBS
“We didn’t play our best football, but happy to get out of here with a win,” said Fobbs, whose team went 0-4 in the spring. “Tennessee State is a good football team and well coached. We just continued to fight today and I am proud of our guys for fighting hard for all four quarters. We make the biggest adjustments from Week 1 to Week 2 and we are just going to enjoy this victory today.”

UP NEXT
Grambling State travels to Hattiesburg, Miss. Saturday to take on Southern Miss. Tennessee State and Eddie George are in Memphis Saturday for the Southern Heritage Classic vs. Deion Sanders’ Jackson State Tigers.