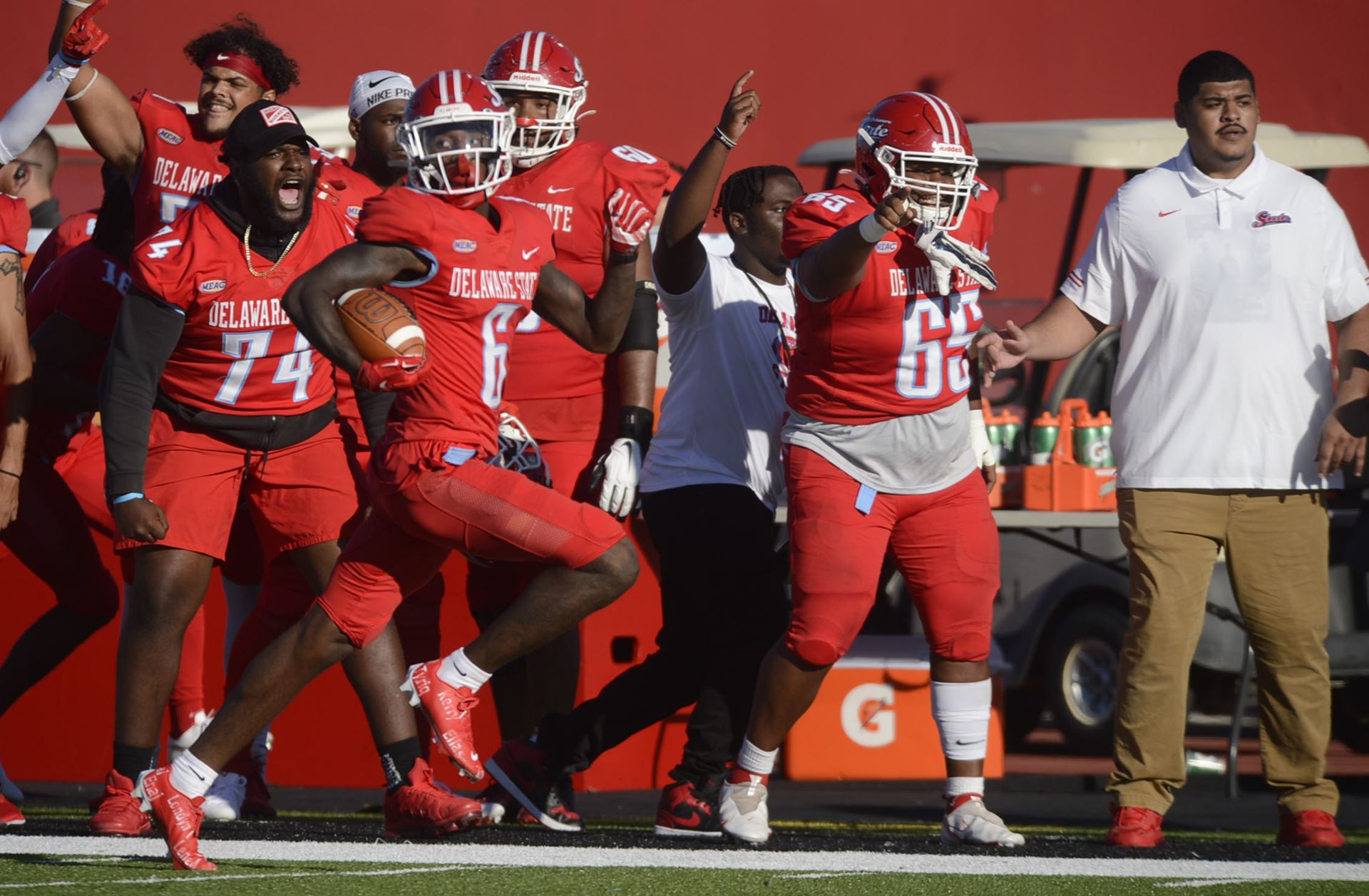 Delaware State jumped out on CIAA champion Bowie State early but the game turned into a true contest late.

DOVER, DE — Bowie State looked like a team that didn’t play for nearly two years in some cases Saturday evening and at other points, looked very much like the CIAA champions they were before COVID took hold.

Fortunately for Delaware State of the MEAC, there was just enough BSU rust to lead to a 32-24 win at Alumni Stadium, the second season-opening win of 2021 for DSU. The Hornets defeated Howard in their spring opener as well.

Playing a key part in both wins was defensive back Esias Guthrie, who recorded two interceptions, one an 87-yard touchdown that gave the Hornets some much needed breathing room and a 26-3 lead heading into halftime. Guthrie’s two picks were a part of six turnovers forced by Delaware State Saturday.

“We were in a Cover 4 defense and I saw that the ball was going to be too high for the receiver,” Guthrie said of his pick-six. “I just came up with the ball and it was a long run.”

The Hornet run game by committee was led by freshman back Sy’Veon Wilkerson, who rushed for 86 yards and three touchdowns (2, 6 and 11 yards) on the day.

“You haven’t seen the best of Sy’Veon Wilkerson yet – he’s only going to get better,” Hornets head coach Rod Milstead said. “He goes against our defense every day in practice, works hard and deserves every rep he gets.”

“I felt great, honestly. Football is football at the end of the day,” Wilkerson said. “I just went out there and do what I usually do, with the help of my o-line.”

The Hornets (1-0 in fall) got off to a good start when Ronald Holmes knocked the ball loose from Bowie quarterback Ja’Rome Johnson and recovered the ball in Bowie territory. Sophomore quarterback Tylik Bethea scored on a one-yard run six plays later. After a Romell Harris-Freeman interception, Wilkerson pushed a pile forward for his first of two first-quarter touchdowns, staking DSU to a 19-0 lead after one.

Bowie (0-1) rallied behind Ja’Rome Johnson, who passed for 203 yards and three touchdowns in the second half. Johnson threw two of those in the first five and a half minutes of the third quarter, a 22-yard pass to Corey Johnson and a 23-yard strike to Kwincy Hall sandwiched between a Wilkerson fumble.

Wilkerson redeemed himself with an 11-yard touchdown run with 5:38 to go in the third for DSU’s final points. Bowie State had several chances, but interceptions by Daniel Douglas and Guthrie along with a fumbled punt kept the Bulldogs chasing the Hornets. Johnson was able to throw a final touchdown pass to Victor Olayinka with 3:03 to go in the 4th quarter, but Wilkerson and Bethea ran out the clock to preserve the win.

“Coach Wilson had his guys prepared and ready to play,” Milstead added. “We were fortunate enough to come away with the win today. We’re excited about it, but today showed us we’re not where we want to be yet. But we’re on the right track.”