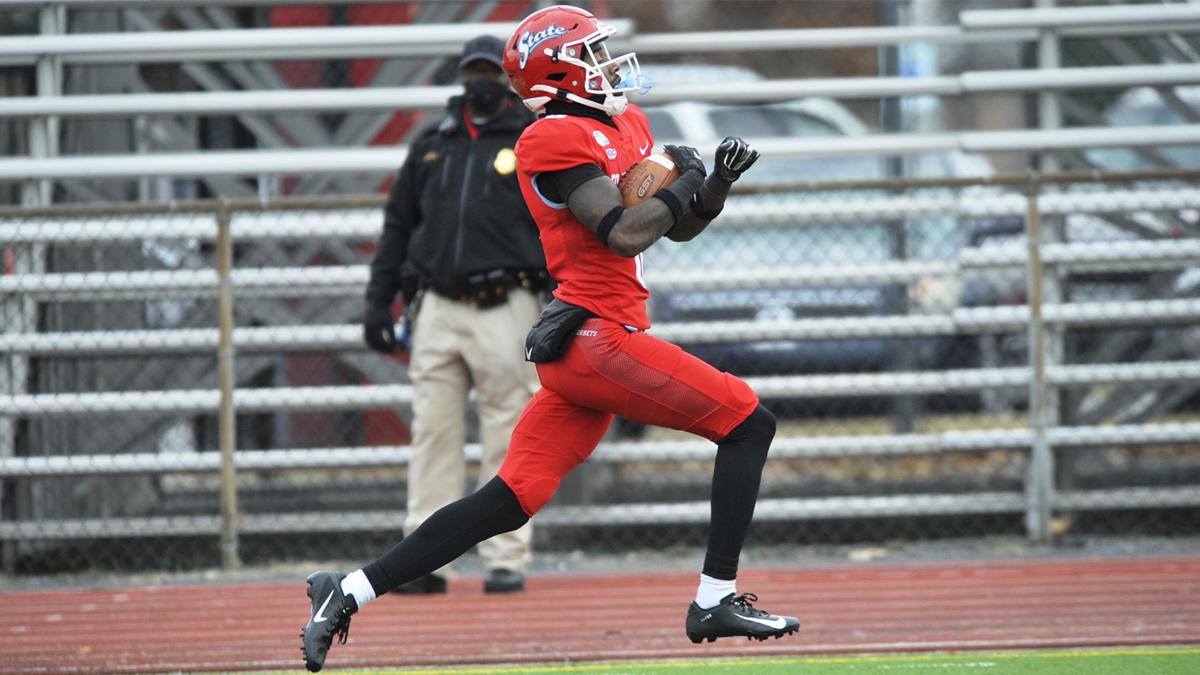 Delaware State and Howard University both started the football season with a lack of offensive firepower, but DSU managed to salvage a win.

Dover, Del. (Feb. 27, 2021) — In a game that featured a baseball score for three quarters, Delaware State got a strong relief performance from its back-up quarterback and a save by the defense to highlight a 17-10 victory over Howard in the spring ’21 opener at Alumni  Stadium.

The Hornets trailed 3-2 entering the fourth quarter before scoring 15 unanswered points to earn their first win in a season opener since a “17-10” victory over VMI on Sep. 1, 2012 at Alumni Stadium.

The Hornets, who led 2-0 after a safety on a punt snap out of the end zone on the opening possession for the Bison, regained the lead on another Howard special teams mishap in the fourth quarter.

Seven plays after a squibbed punt by the Bison gave Delaware State the ball at the HU 41 yard line, second string quarterback Jared Lewis scored on a one-yard keeper to give the Hornets an 8-3 lead with 9:38 left to play. Lewis completed a two-point pass to tight end Myles Beverly after the touchdown to stretch the lead to 10-3.

After an exchange of possessions, Howard started a drive at its 22 with 2:37 left to play. The Bison recorded one first down on the possession before DSU defensive back Esaias Guthrie intercepted a pass by Howard QB Quinton Williams intended for Matthew McDonald and returned the ball 41 yards for a “pick-six” touchdown. The extra point by Jose Romo-Martinez gave the Hornets a 17-3 lead with 2:06 left to play. The interception and return for a touchdown was the first by the Hornets since J.R. Robinson vs. Chowan in 2015.

Howard needed just 31 seconds to answer the score on the ensuing possession to cut DSU’s lead to 17-10 with 1:28 left to play.

The kickoff following the touchdown provided some drama as it appeared that Howard recovered the onsides kick attempt, but the officials ruled the Bison touched the ball before it traveled the required 10 yards on the kick.

The Hornet defense forced two turnovers in the game. DSU recovered a fourth quarter fumble by the Bison when Charles Peeler stripped the ball from Howard quarterback Williams and linebacker Antquan Kinsey recovered the ball with 6:37 left in the fourth quarter. In addition to the forced fumble, Peeler recorded three solo tackles and two pass break-ups.

Linebacker Olivier Muembi led the Hornets with six total tackles, including one behind the line of scrimmage.

Lewis completed three of seven passes for 27 yards and rushed for a game-high 62 yards on 19 carries in the game.

The Hornets return to action in this abbreviated season on Mar. 13 at South Carolina State. The Next home game is scheduled for Apr. 3 against SC State.