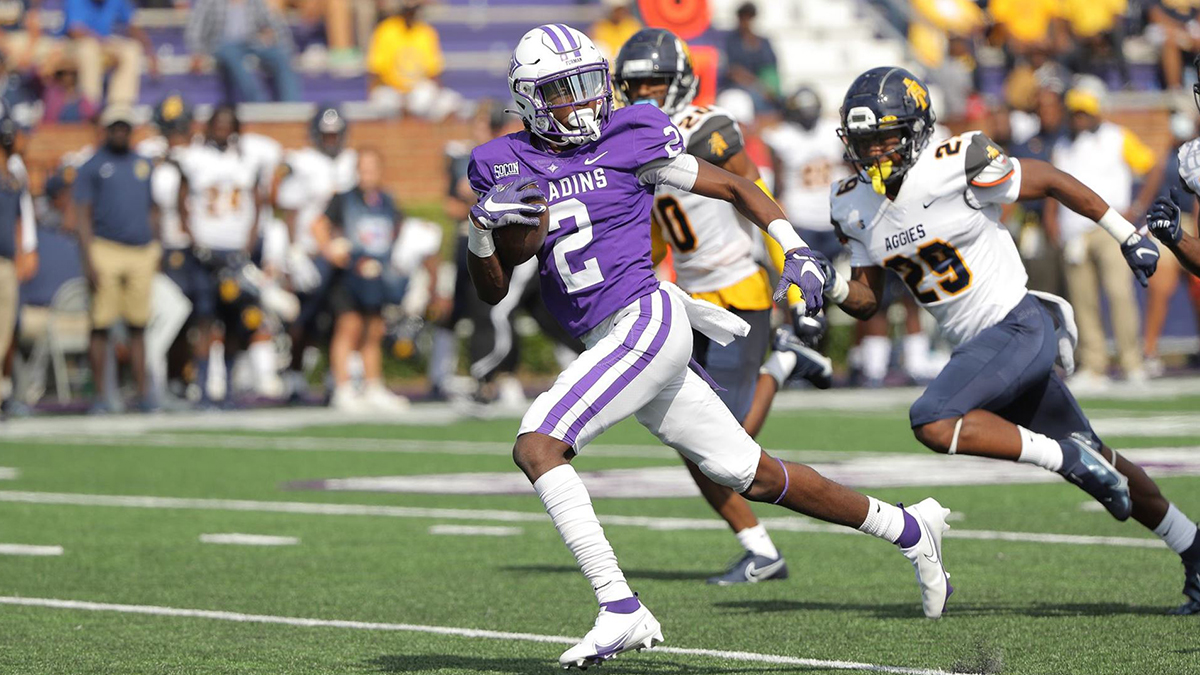 Nationally-ranked Aggies start slow, rally late but come up short in season opener on the road.

If NC A&T had any hopes of an immediate return to glory dashed as they fell at Furman, 29-18 in its season opener Saturday afternoon.

Playing its first game a new member of the Big South Conference after a dominating three-year run through the MEAC, the Aggies fought back from a 23-3 second half deficit to get within a touchdown but were unable to get any closer.

Furman quarterback Hamp Sisson (25-40-1) threw for a career high 362 yards and three touchdowns to pace the Paladins who also shut down the Aggies’ vaunted rushing attack, holding them to 71 yards on 31 carries.

NC A&T had other troubles. Virginia Tech transfer defensive back T. J. Crossen had to be taken off the field on a stetcher early in the first quarter with a neck injury. Two key defenders, starting linebackers Alex Fumbah and Jacob Roberts, were both ejected for leading with their helmets (targeting). Nearly every member of the Aggies defensive backfield had to go out with cramps. The Aggies also finished with 10 penalties for 105 yards.

“We did not play well, offensively or defensively, but we competed and fought to the end,” said NC A&T head coach Sam Washington. His team had not played in over 600 days after sitting out the fall 2020 and spring 2021 seasons. The Aggies were ranked 24th and 25th nationally in preseason FCS national polls.

NC A&T junior quarterback Jalen Fowler, starting the first game of his career, had two third quarter turnovers, an interception and a fumble at the Furman goal line. The Paladins turned both miscues into touchdown passes by Sisson to stretch a 10-3 halftime lead to 23-3 midway through the period.

Tony Blackshear picked off Fowler on the Aggies first possession of the third quarter. Two plays later, Sisson hit Joshua Harris on a 41-yard scoring toss. On a long review after the score, the officials ejected Roberts for a targeting hit on Sisson.

Fowler got the Aggies right back in scoring position hitting Ron Hunt on a 37-yard pass to the Furman 4. On second down from there, he broke free over the right side, was hit at the 2 and fumbled with Furman recovering at the 3. Three plays later, Sisson hit tight end Ryan Miller over the middle and he outran defenders to the end zone on an 87-yard scoring play. After the PAT, Furman led 23-3 with 7:40 left in the third quarter.

Fowler came back however to drive the Aggies 53 yards in eight plays and get their first TD of the season. He hit wideout Ron Hunt on a 16-yard scoring pass to pull the Aggies within 23-10 with 2:33 left in the period.

After Furman placekicker Tommy Bieekrode hit a 47-yard field goal to put the Paladins up 26-10 early in the fourth quarter, Fowler hit Hunt on a 74-yard bomb on the first play after the kickoff to pull the Aggies within 26-16. Fowler connected with Korey Banks on the 2-point conversion and the Aggies fortunes appeared to be looking up. They trailed just 26-18 with plenty of time, 13:24 left to play.

NC A&T gets its chances

Those fortunes looked even better when linebacker Tyquan King picked off Sisson on the next series setting up the Aggies at the Furman 13. An offensive pass interference penalty on first down pushed them back. On fourth down, placekicker Andrew Brown missed wide left on a 38-yard field goal attempt with 10:34 to play.

The Aggies got another chance on Furman’s next possession as Sisson fumbled on his own 41 with linebacker Richie Kittles recovering. They drove to the Furman 23 where on fourth down, Brown was not able to get off a field goal attempt as back-up QB Kingsley Ifedi couldn’t handle a low snap.

“I thought we had some chances to pull within four or five points late, but we didn’t execute,” said Washington.

Furman took over from there and put together a nine-play, 61-yard drive culminating in Bieekrode’s 26-yard game-clinching field goal. The drive consumed four-and-a-half minutes and came with 2:29 left. A&T drove to the Furman 23 before turning the ball over on downs.

Miller had four catches for 124 yards to lead the Furman receivers. Devin Wynn rushed for 75 yards on 18 carries and caught five passes for 55 yards and a score.

Fowler started slow but finished completing 14 of 29 passes for 268 yards. Hunt was his main target as he caught five passes for 146 yards and the two scores. Preseason all-American running back Jah-Maine Martin never got untracked and rushed for just 33 yards on 12 carries. Rover Joseph Stuckey led A&T defenders with 13 tackles. Safety Najee Reams had eight. The Aggies were not able to sack Sisson.

Furman responded with a drive that covered 79 yards in 11 plays capped by Sisson’s 17-yard scoring pass to Wynn that came with 4:33 left in the opening period. During the drive, Fumbah was ejected after a hard hit on Furman wideout Ryan DeLuca.

The Paladins drove 67 yards on 17 plays to score on Bieekrode’s 41-yard field goal. It gave Furman a 10-3 lead three minutes into the second quarter. Furman put together one more first half drive that resulted in a missed 40-yard field goal in the final minutes.

NC A&T stays on the road as they will be in Durham, N. C. for a date against Duke of the ACC on Friday, Sept. 10 at 8 p.m. The ACC Network will carry the game.