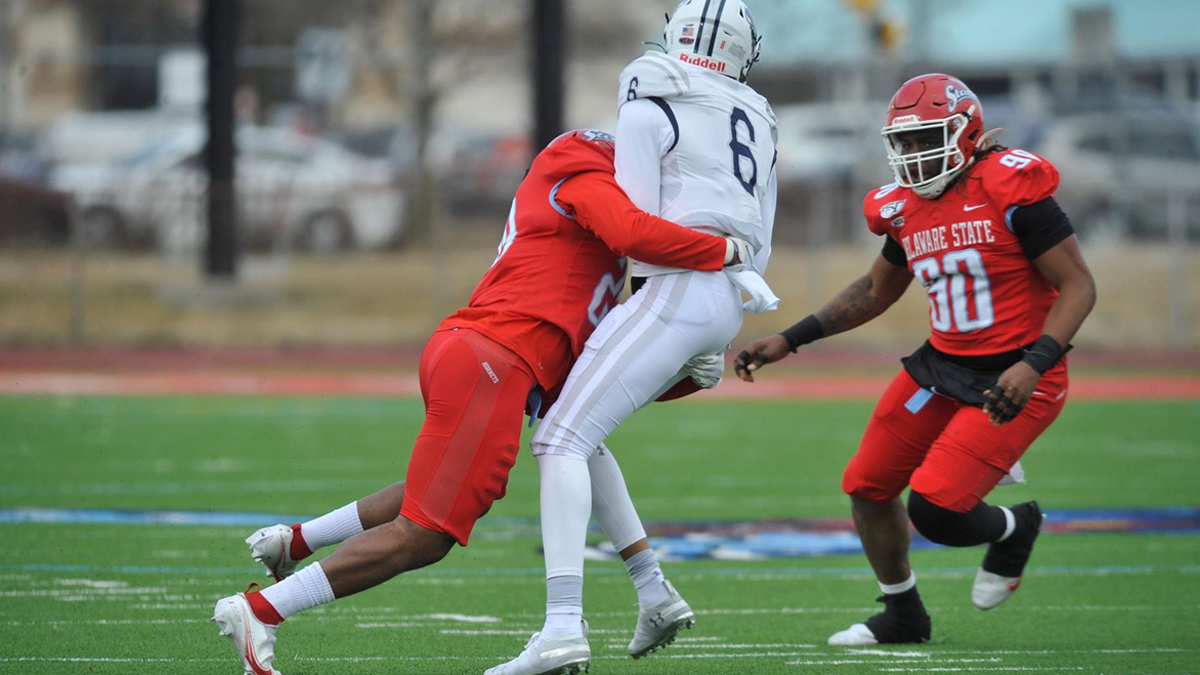 Delaware State finished below .500 in the spring season, but its coach and players feel like they have turned the corner.

Delaware State football enters the fall 2021 season confident that it has turned the corner.

That much was evident during MEAC Media Day in late July. You could see it on the face of head coach Rod Milstead and his players in Downtown Norfolk, VA. The Hornets were predicted to finish fourth in the MEAC this fall.

“You’re gonna see a different Delaware State University football team,” Milstead said. “We’re not the old Del State. The past couple of years we were predicted to come dead last. I was shocked when I saw the fourth prediction. But I know what we have in Dover, and I know what to look forward to.”

DSU’s confidence grew during the spring 2021 season. It was one of three MEAC programs to lace ‘em up after the conference pulled the plug on its hopes for a spring season. Things got off to a rough start at home against Howard when starting quarterback Tylik Bethea went down for a season-ending injury. The team rallied back behind the defense and quarterback Jared Lewis and came away with a 17-10 win to open the season.

Delaware State would finish the spring 2-3. Both wins came against Howard. The losses were to nationally-ranked University of Delaware and a pair of close ones to SC State.

“No one started pointing fingers. It was a team win. And when we didn’t win we learned from it,” Milstead said of the spring. “We had two close games against South Carolina State. And if those guys are predicted to be the measuring stick of the MEAC, I feel pretty confident and pretty comfortable where our team is right now.”

The quarterback position has five members, but it appears to be a two-man race.

Bethea had a solid true freshman campaign in 2019, starting 11 of 12 games. He ranked eighth in the MEAC in passing at 123.2 yards per game that season. His 2019 yardage total and completions were the most for a true freshman in team history and season completion total ranks 11th all-time at the school. Bethea began the spring season as the starter, but an injury in the second quarter ended his spring campaign.

In came Lewis, a redshirt sophomore from Baltimore. He was the quarterback the rest of the way, throwing seven touchdowns to five picks.

The Hornets have a deep backfield. Sy’Veon Wilkerson led them in rushing during the spring, running for 262 yards and averaging five yards per carry. They also anticipate having back Michael Chris-Ike, who showed some signs of breakthrough as a freshman, but hasn’t played since 2018.

Whoever emerges as DSU’s QB will have some solid targets to throw to. Senior wideout Trey Gross is a preseason second-team All-MEAC selection after 17 receptions for 248 yards and five scores during the spring. Tight end Myles Beverly is also a preseason second-team All-MEAC selection and will team with Arizona transfer Kevin Meady to give DSU a solid one-two punch.

The O-line has two preseason All-MEAC selections. Grad student Matthew Derks is a first-teamer while redshirt senior Dillion Marshall was picked for the second team. Milstead himself is a former star DSU offensive lineman and his line gets a lot of attention.

The Hornet defense has solid talent

Former walk-on Jawain Granger is back for his senior season. Granger had five solo tackles and an interception despite being slowed by injury during the spring season. In 2019, Granger was tied for first in MEAC with 12 pass breakups and tied for fifth in the  MEAC in passes defended at 1.00 per game.

“We was working hard,” Granger said of the team’s preparation for spring 2021. We was working through snow, rain, ice — we had to sweep it out our dang selves to just get out there and work. So it was exciting.”

That excitement has permeated around DSU, according to Milstead. So much so that he said he almost had to force his players to take a break from football following the spring.

“I wanted them to get away for a while. I wanted them to miss it, and then come back with the mindset that ‘hey, I’m going to pick up where I left off, and we’re going to continue to push the vision of Coach Milstead,” he said. “And that’s what they’ve done this offseason.”

Competing in the new-look MEAC

“If it’s Bowie or it’s Alabama, we want to play consistent football. Hard-nosed football,” he said. “The outcome is going to be the outcome, but we feel confident opening up against Bowie.”

The rest of September will include matchups against Georgetown, East Tennessee State, Merrimack, Wagner and Virginia University of Lynchburg before diving into conference play in the new-look MEAC. Milstead, who played in a seven-team MEAC during the 1980s and 90s, says the new scheduling style will provide some nail-biting for all programs.

“Losing a conference game could put you out of the conversation to be a MEAC champion. When you have those opportunities, you gotta take advantage of them,” he said. “Each team has five games to play. You lose one, you could be done. It’s going to be very stiff completion when you’re talking MEAC play because everybody knows it’s pretty much sudden death for the most part — but we’re excited.”