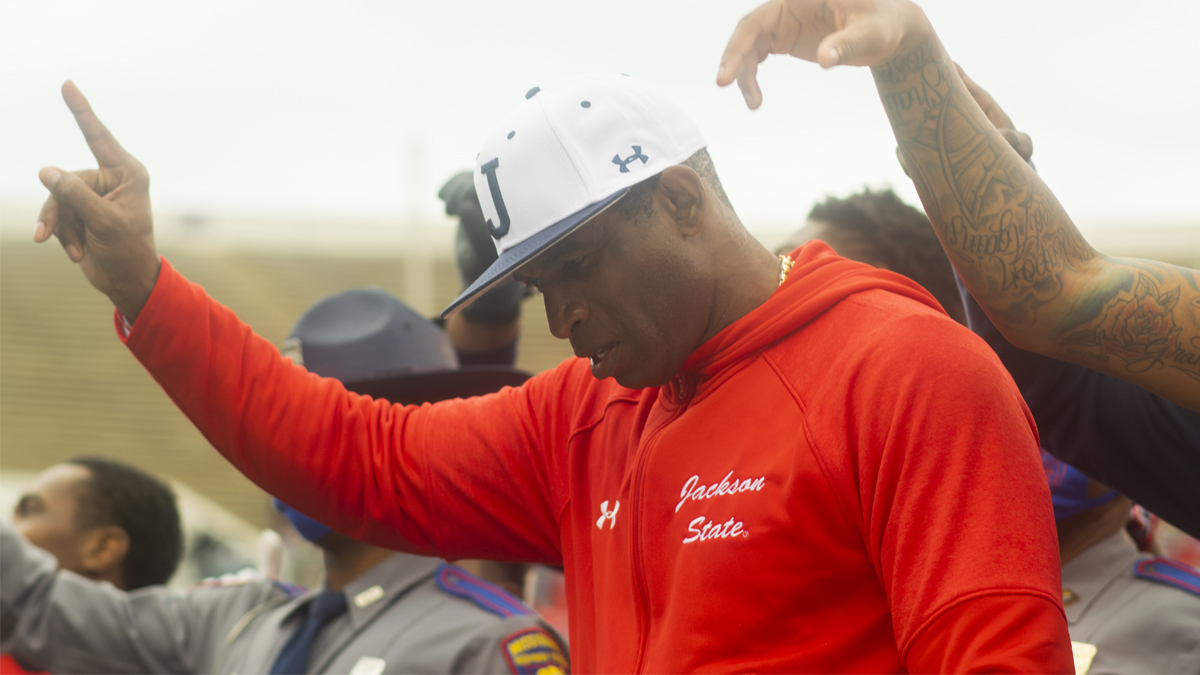 It’s time to dissect another interesting tweet from Deion Sanders

Deion Sanders made it into the Hall of Fame for his big plays on the field, he’s showing the same level of skill with his moves on Twitter. On Thursday Sanders got the emojis, memes and comments riled up with a simple request to the Big 12 Conference. He’d like to talk.

At this point, it just becomes speculation of what the conversation would be about. With Oklahoma and the University of Texas making it known they intend to leave the Big 12 conference for the SEC, the low-hanging hypothesis is that Jackson State would want to jump to the FBS ranks.

The idea is easily dismissed by most, and as Texas and Oklahoma have shown, negotiations take place through back channels well in advance. Not on social media.

Who was the intended target?

Herein lies the complexity of Deion Sanders and how he operates. As he once told me during an interview, “I’m not pitching unless there’s a batter.”

Sanders saw an opportunity, in my opinion, to throw Jackson State into the conversation about who could replace the two departing members of the Big 12. The media coverage and social spread have resulted in another round of exposure and awareness for JSU. Good, bad, or indifferent based upon your bandwidth to “Believe.” It’s not much different than when he tweeted in December supporting JSU going to a bowl game outside of the Celebration Bowl.

Is it marketing madness or the beginnings of a real play? I think both are true.

I talk about the inner workings of HBCUs every single day. Some information gets reported, some outright rejected and some filed away as things to keep an eye on. For the last year or so there has been talk of a handful of HBCU programs that have a goal of ascending to FBS classification.

It’s not unheard of for an FCS program to move up to FBS. Eleven schools have made the move in the last decade. Appalachian State (9-3), Georgia Southern (8-5), Coastal Carolina (11-1), and Liberty (10-1) finished a collective 38-10 last season. These schools are relatively considered newcomers to the FBS level in the last five years.

JSU has been making moves

HBCUs often carry the burden of being cash-strapped and lacking what is considered the standard level of resources at the college level. Something that Sanders himself has pointed out in the past. However, you can’t deny the impact Sanders has had in less than a year on campus in Jackson.

A new apparel deal with Under Armour, team clothing from Michael Strahan, new turf and grass practice fields along with the new 18 wheeler equipment truck that rolled out last week. Those deals were executed mainly through relationship capital, which is the benefit of having an iconic figure as the face of your program.

Digging beneath the surface you’ll also find there is context within the fine print. The contract for Deion Sanders stipulates a $100,000 bonus if Jackson State were to change conferences. Could this be the beginning of a move for Jackson State? This contract language could go one of two ways. JSU could have already been thinking along those lines and created an incentive in case Sanders could help push such a move through. Or Sanders could have asked for the clause and JSU was either indifferent or thought it to be highly unlikely. Something to give away as a win in contract negotiations with nothing seemingly lost.

As you ponder that question consider that betting odds aren’t in favor of Jackson State jumping to the Big 12. No time soon at least. However, whenever conference realignment begins at the top of the pecking order, the winds of change blow all the way down.

You can’t be in play for a move without making it known you are ready to consider available opportunities. And social media and the attention that follows is probably the best platform to remove any doubt about your intentions.

The head football coach at Jackson State is a one-percenter when it comes to football. He’s experienced the highest level of achievement and access to resources as a player and he shows no lack of interest in repeating that as a head coach. Some may interpret that as he’ll soon be headed to another program with more cash flow, which is a fair opinion to have.

From what I’ve seen and what I know to be true I wouldn’t predict an early exit for Sanders. He has the opportunity to build a legacy as the central figure of modern Jackson State football. He can also do it however he pleases. There will be zero pushback at JSU to speak honestly about race, and social issues that impact the black community. The same can’t be said about any and every university. Ask Nikole-Hannah Jones how the truth and the money don’t always agree.

If Jackson State were ever to make a move, you could be sad or mad but don’t be shocked. The school that brought Hall of Famer Deion Sanders to Jackson has been full of surprises the last year.