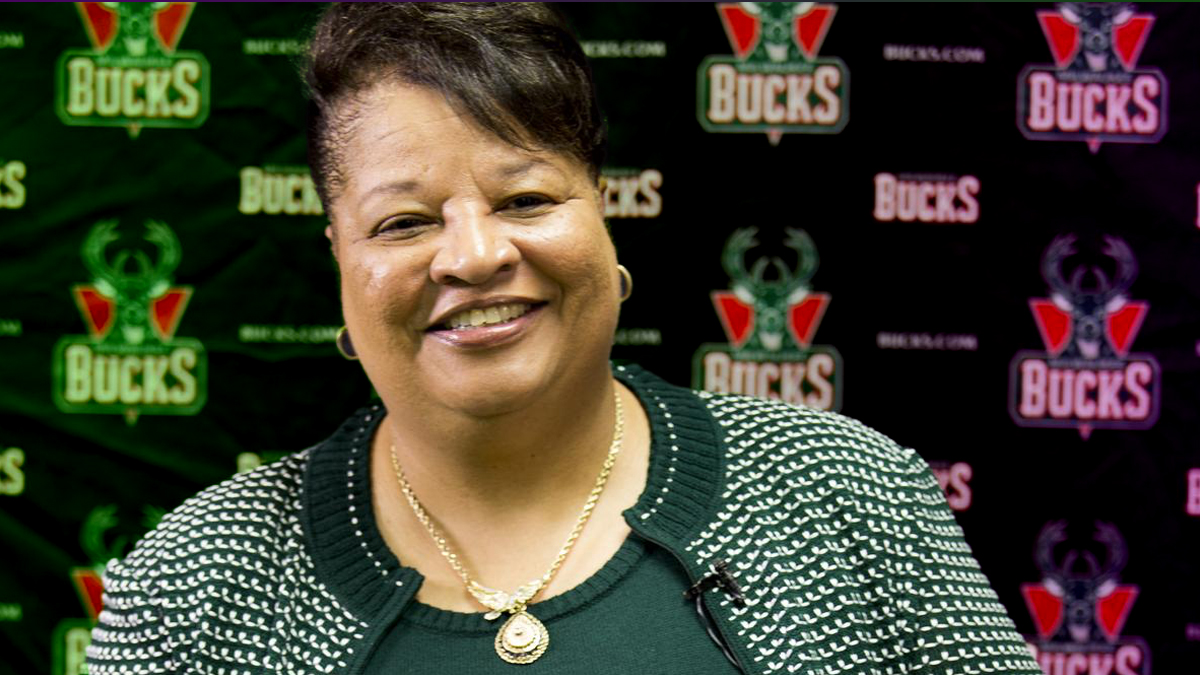 Dr. Valerie-Daniels Carter is not only a minority owner with the Milwaukee Bucks, she’s also a proud HBCU alumna and former basketball player.

Milwaukee Bucks co-owner Dr. Valerie Daniels-Carter is a proud graduate of Lincoln University of Missouri who knows that nurturing your passions can lead to big things.

At a young age growing up on 44th and Hampton Streets on Milwaukee’s north side, she had a love for entrepreneurship, sports and her community. All have paid off handsomely for her.

In business, she now helms a four-state conglomerate of over 100 multi-brand restaurant franchises – Burger Kings, Pizza Huts, Aunti Anne’s Soft Pretzels, Captain D’s Seafood, among others – that is amongst the largest in the nation. Hers is the largest female-owned franchise organization in the U. S.

NBA Hall of Fame big man Shaquille O’Neal, a titan of his own in more ways than one, is one of her business partners.

In sports, she owns a minority stake in the Milwaukee Bucks franchise, the 2021 Eastern Division champion now playing in the NBA Finals vs. the Phoenix Suns. Daniels-Carter also sits on the board of directors of her beloved Green Bay Packers, her state’s NFL franchise.

Her community and philanthropic efforts have run even deeper, reaching from her Midwestern roots into Africa. She has developed a host of community youth and empowerment centers, built housing, educational, art and health complexes both here and on the continent. She has been a stalwart in her Christian community. Daniels-Carter is widely known as a motivational speaker, life coach and humanitarian.

She has volunteered for and chaired numerous organizations and boards and in 2017 was appointed the first female African-American president of the American Automobile Association (AAA) with its 60 million members. She was inducted into the National Black College Alumni Hall of Fame in 2019.

“I’m God-made,” she told a local Milwaukee TV station, WTMJ-4. “I have been blessed to work all of my life. When I started this journey, I had a mission, and I have been able to achieve it.”

Growing up Valerie Daniels in Milwaukee in a family with seven other children created a lot of opportunities. She took advantage of one to start her first business shepherding kids safely to school for a nominal fee.

“I told them (parents) there are dogs on the path and lots of other things their kids might be afraid of and I could make sure they got back and forth safely,” she told Black Enterprise Magazine earlier this year. “Thankfully, no one every tested the waters to see if I really could fight because I coundn’t.”

It was also in her youth that she developed a passion for sports, playing on the high school basketball team at nearby Rufus King High School before going on to Lincoln, an Historically Black College in Jefferson City, Missouri.

Lincoln helped grow all those youthful passions and helped her and them grow into the fruitful outlets they have become. At Lincoln, she graduated with a bachelor of science degree in business administration in 1978. She also played a starring role on the Lady Blue Tigers basketball team. So outstanding was her prowess as a hooper that she was drafted by the Milwaukee Does of the fledgling Women’s Professional Basketball League (WPBL).

“Sports, I love it,” she told the local TV station. “I have been basketball since I was a young girl. So from the Does to the Bucks, here I am,” she said.

A focus on business

But basketball, at least then, was not in her future. Just after graduating from college, she quickly embarked on a series of jobs that educated her on the finer points of banking, accounting, auditing and finance. After only a short time, Daniels-Carter joined with her bother, attorney John Daniels, to look for business opportunities.

“I really wanted to focus on things that would be long term,” she told Black Enterprise in an earlier interview. They settled on franchising, a subject she studied profusely. After several moves and a hefty loan, they opened their first Burger King restaurant in 1984.

As the owner and operator of V&J Holding Co. Inc., she now sits at the vortex of a collection of some 38 Burger King stores including 12 in her native Milwaukee area and 26 more in Detroit. Through other subsidiaries such as V&J Foods and V&J United Enterprises 60 Pizza Hut locations in New York and western Massachusetts are operated. The company has over 3,000 employees.

Bucks for the Bucks

In 2014, Daniels-Carter helped form Partners for Community Impact, a group of diverse community investors that purchased a minority stake in the Bucks. They joined a majority group that purchased the team that year. She routinely sends messages to the team before each game.

“I am so excited about this season,” she said of her team that trails the Suns 2-0 in their best of seven NBA Finals series. Game Three is scheduled for Sunday night in Milwaukee. The Bucks are hoping for their first title since the 1971 team that featured Norfolk State’s Bobby Dandridge.