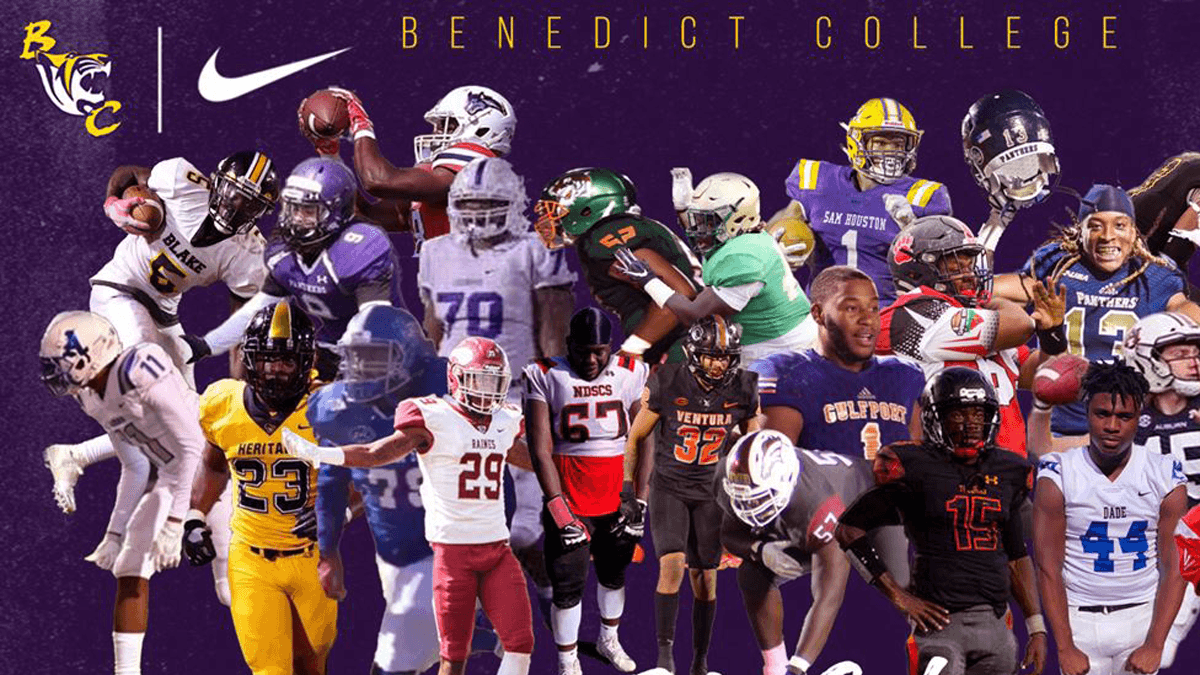 Chennis berry was a late hire but he’s managed to gather one of the largest recruiting classes in school history.

COLUMBIA, S.C. – Benedict College head football coach Chennis Berry and his staff have been busy signing their first recruiting class. The Tigers have assembled one of their largest recruiting classes in school history with 31 current commitments for the 2020 season.

“We’re excited about the young men that we have coming into our program,” Berry said. “They fit into our philosophy of great student athletes that believe in dedication, integrity, God, discipline, effort, execution and pride.  We were able to fill some major needs starting with the offensive and defensive lines as well as addressing the quarterback position.”

“We’ve added some explosive skill guys on both sides of the ball,” Berry said. “This class is filled with young men that are serious about our commitment of chasing A’s, B’s, championships and degrees.  We’re super excited and can’t wait to get these young men on campus!”

The new Benedict College Tigers are:

Taj Gregory, a 6-foot-7, 196-pound quarterback from Coppell, Texas (Coppell HS / Trinity Valley CC)
Coaching scouting report: “Has great field presence and vision because of his frame … He has a very strong arm … He is a student of the game.”

Wide Receiver
Jonis Dieudonne, a 5-foot-10, 180—pound wide receiver from Naples, Fla., (Lely HS).
Coaching scouting report: “Explosive and dynamic … Has the ability to make plays when the ball is handed to him or thrown to him … Played both ways at Lely High School and in a variety of roles.”

Briand Dorgil, a 6-foot-1, 205-pound wide receiver from Orlando, Fla. (Lake Nona HS / Stony Brook).
Coaching scouting report: “A solidly built receiver that is physical … He is an attentive player that has great internal drive … Will bring experience to the receiver room.”

Trey Chancey, a 5-foot-8, 160-pound wide receiver from Jesup, Ga., (Wayne County HS).
Coaching scouting report: “Very fast and explosive player … Has a lot of wiggle and makes something happen every time he touches the ball … Can make plays in all three phases of the game.”

Tayven Grice, a 5-foot-11, 175-pound wide receiver from Lake Charles, La., (Sam Houston HS).
Coaching scouting report: “Super productive player (124 catches and led the state in receiving yards) … Dynamic athlete who can put points on the board … He’s a steal from the state of Louisiana.”

Running Back
Omarion Coleman, a 5-foot-10, 175-pound running back from Tampa, Fla, (Blake HS).
Coaching scouting report: “Explosive back that can score from anywhere on the field … Has good hands out of the backfield … Can beat defenders with his speed, strength, and wiggle.”

Ja’Varrius Wilson, a 6-foot, 210-pound linebacker from Zephyrhills, Fla., (Clearwater Academy International HS).
Coaching scouting report: “He is an explosive athlete … He plays with violence … He lives around the ball and makes impact plays.”

Defensive Back
Cameron Daniels, a 5-foot-10, 185-pound defensive back from Lithonia, Ga., (Alcovy HS).
Coaching scouting report: “He controls the post as a physical force … Makes plays when he blitzes … Inserts with physicality in the run game.”

William Johnson III, a 6-foot, 180-pound defensive back from Jacksonville, Fla., (Raines HS).
Coaching scouting report: “Long and rangy player … An explosive player with a knack for making big plays … Made a lot of plays for a big-time program in high school.”

Daythan Peterson, a 5-foot-10, 180-pound defensive back from Cocoa, Fla., (Merritt Island HS).
Coaching scouting report: “Runs well and will hit you … Can play man and is a physical force player on the edge … Has film on special teams and loves to play.”