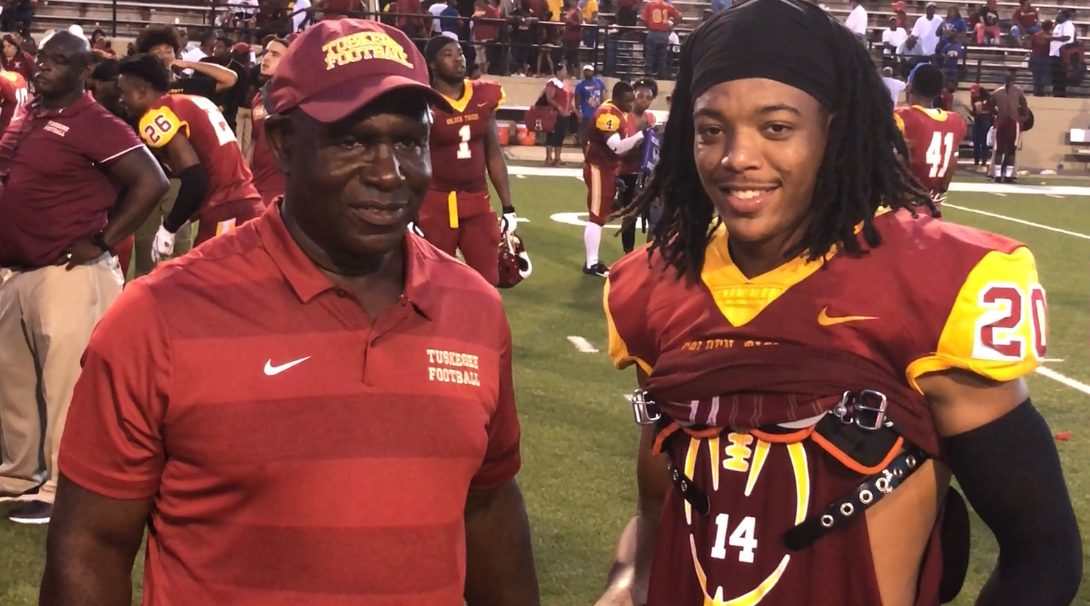 Golden Rams fail to get on the scoreboard against Skegee defense.

PHENIX CITY, AL–The Whitewater Classic reversed stream from what we saw a year ago. Tuskegee (1-1) avenged a lopsided loss from Albany State (0-2) in 2017 by laying down a dominant 20-0 performance on Saturday. The only thing more dominant was the heat, which was a stifling 91 degrees at kickoff. The game was a possible SIAC Championship preview based on preseason voting. Both teams were voted to win its respected division in the SIAC.

After a defensive first quarter, Tuskegee scored all the points it needed in the second.  Jamarcus Ezell hit Chardian Johnson in the corner of the endzone on a 31-yard touchdown strike for the first score. The PAT was blocked to put the score at 6-0.

Just before the half backup QB Ahmad Deramus also dropped a 31-yard bomb, finding Javarrius Cheatham streaking up the sidelines for the score. Deramus was in the game after Ezell’s helmet came off on the previous play, forcing him to exit for one snap. A big snap it was. Deramus would eventually finish the game for Ezell, after the starter suffered what was described as a bruised shoulder early in the fourth quarter. Ezell finished 11-15 passing while Deramus was a perfect 4-4 throwing the ball.

The only thing #Skegee has lost today is QB Jamarcus Ezell for the rest of the game. Ice on shoulder and arm in sling in 4th qtr. Tuskegee up 20-0 over Albany State with 5 mins to go. pic.twitter.com/X7kMmkyLsC

Ezell was seen on the sideline with a makeshift sling and ice on his shoulder during the fourth quarter. After the game Coach Willie Slater said he hopes his quarterback will be ready to go next weekend versus Clark Atlanta.

Albany State couldn’t find a rhythm with its starter, Stephon Masha. In the first half he was just 3-7 passing with one interception. Kelias Williams replaced Masha after his second quarter interception and played until he threw a pick six to Rorrick Steward early in the fourth. The 35 yard interception return put the game out of reach for the stagnant ASU offense. Masha and Williams exchanged snaps after the score. Williams finished the game 7-14 passing with two interceptions.

Tuskegee will be on the road next weekend for the game with Clark Atlanta. Albany State returns home for a matchup with West Georgia.