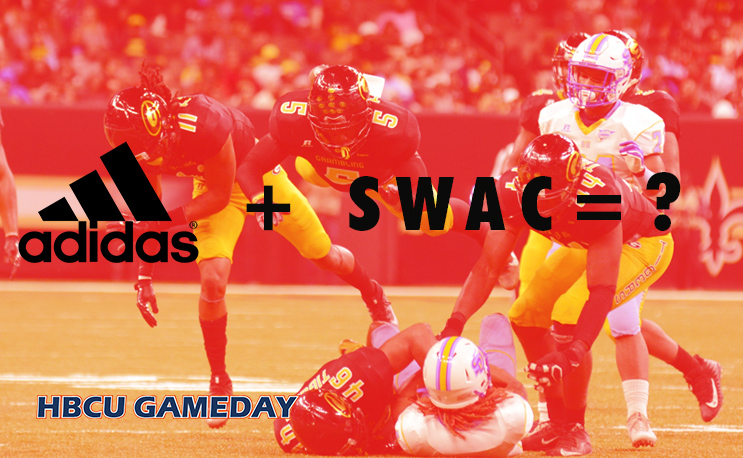 Adidas has filled the void left behind by Russell Athletics for several programs in the SWAC.

The college football season is just a few months away, and for most HBCUs, that will also mean new uniforms. Russell Athletic’s decision to step away from the uniform game has opened up the lane for Nike, Adidas and Under Armour to fill the void.

Nike (SIAC) and Under Armour (CIAA) both locked in entire HBCU conferences. Adidas, meanwhile, has been busy scooping up schools in the SWAC. The conference didn’t sign a group deal like its Division II counterparts, but the Three Stripes has made inroads at several schools so far.

We haven’t seen any uniforms yet, but our curiosity is getting the better of us. So we asked our intern Lena Williams to come up with some concepts based off FBS teams.

The Hornets were the first to sign with Adidas this spring, so its only right we take a stab at their new unis first. This look is inspired by Missouri.

Next up we have an LSU-inspired version of what Prairie View could be rocking in the first season under new head coach Eric Dooley.

And last, but not least, the two-time defending SWAC champ, Grambling State. We stuck with Missouri on this one as well seeing as how the colors are pretty much the same and they both have Tigers as their mascot.

So there you have it. As the summer progresses, we’ll likely see the real things emerge, but with 80-some days left before the season, it is a good time to start anticipating it.