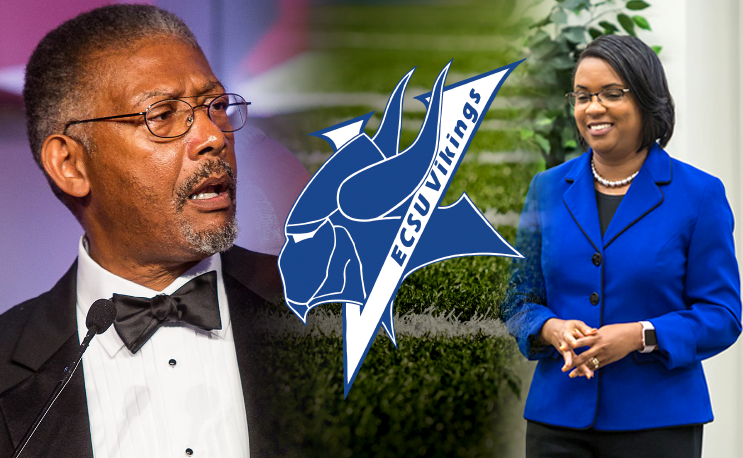 Conway puts his name on it but is he the Paper Tiger?

It seemed a bit odd last month when the press release to fire then Elizabeth City State football coach Earnest J. Wilson didn’t have any quotes from Athletic Director Derrick Johnson.  It was clearly a communication from Chancellor Thomas Conway.  It all makes sense now as ECSU announced on Wednesday that it has parted ways with both Johnson and head basketball coach John Hill.

In the wake of the firings, ECSU has placed former head basketball coach Dr. Claudie Mackey in the role of interim athletic director.

“We are grateful to Derrick and John for their service to our student-athletes and this University,” said Chancellor Conway. “We are committed to the ECSU Athletics program and want to ensure its success,” he stated.

Johnson was about a week short of just finishing his third year as the Vikings’ AD.  On May 10, 2017, Hill was named full-time head coach for the men’s program. That was less than one year ago.  Hill guided the Vikings to a 12-15 record this season including a win over Division I Norfolk State University.  The Vikings were 2-23 the year before, which signifies improvement under Hill’s watch. Hill also coached the 2018 Rookie of the Year, Zaccheus Hobbs.  In a tweet posted at the same time of the news release, Hobbs didn’t seem in favor of the firing.

On Monday, ECSU announced the appointment of its new head football coach Anthony Jones. Jones is a former NFL player for the franchise from Washington D.C., as well as a Super Bowl champion.

The timing of these firings are odd

It’s not unusual for a Chancellor to want to clean house in preparation for a long tenure at their respective university.  However, here’s the rub on Chancellor Conway: he’s on his way out of the door himself.  Conway announced on Tuesday, Jan. 16, 2018, that effective May 31, 2018, he will retire after a 45-year career with the UNC System.

There are a few ways of looking at these unique set of circumstances. One way is to just look at the surface and blame Conway.

Chancellor Conway began his role at ECSU in January 2016, so maybe gutting the athletic department has been on his to-do list from the beginning. He could be just now getting around to it like a pesky chore on the honey-do list. From the outside looking in it certainly appears he could have let the next president decide the fate of the athletic director and the basketball coach.  In less than two months it won’t be his problem anyway.

Johnson may not be the ultimate victim in this recent firing. A source tells HBCU Gameday that leadership was a problem under Johnson’s administration and that some previous actions from within the athletic department could come back to haunt the university in the future. The source went on to say that Conway knew about these supposed issues but declined to replace Johnson until apparently forced to do so by the Board of Trustees.

The other way to view it is to dig a little deeper. Let’s start back in October of 2017 with an article at hbcudigest entitled “Is UNC System Building Upon Leadership Takeover of Elizabeth City State?”

This article contains a memo issued by ECSU Chancellor Thomas Conway that the campus was working with the UNC system on a new campus co-leadership group. This group is formally called:  New Directions: Phase 2 Operational Team. The group had the specific charge to analyze finances at the institution and provide oversight of operational functions like human resources, budgeting, and academic affairs.

Let’s rewind that sentence as it replies to athletics, “provide oversight of operational functions like human resources.”

The prophetic part of this article was set up with this statement, “the system [UNC System] is preparing to install a new leadership team at the university, and it is clear that the executive shifting, finance finessing and legislative jockeying of recent years, which we all thought were done following ECSU’s successes this fall, remain in an effort to marginalize the university.”

Here’s the kicker from later in the article, “All of these elements do not bode well for Elizabeth City State. And what if the new team comes in to suggest that the school is on shaky fiscal ground ahead of a dramatic tuition reduction? Should we expect a retirement announcement from Conway?”

Less than three months later Conway announced his retirement from ECSU. Within three months of that announcement, the University fired its football coach on the dawn of spring football practice and would follow that up with the firing of its AD and basketball coach. All three men, however, had less than three years on the job at the time of their firing.

So maybe the move to clear out the athletic department was a directive from a meddling UNC system prepping the way for the next chancellor.  Thereby making Conway an outgoing chancellor who is the “emperor with no clothes.”

Or maybe it was just a mess that Conway bore some responsibility for and he just needed to fix it before leaving the building.

The emperor who will now wear the clothes will be 42-year old Karrie Dixon, currently vice president for academic and student affairs at the UNC System Office. She will begin her role as interim ECSU chancellor officially on June 1, but her boots have been on the ground in Elizabeth City already.

Dixon has been co-leader, along with Conway, since last fall of the previously mentioned ECSU co-leadership group.  Sources tell HBCU Gameday that internal memos have circulated on campus stating that Dixon will actually start making day to day decisions on campus beginning on April 9.

Dixon acknowledged in an interview with the Daily Advance in January that she is open to the possibility of staying on as ECSU’s permanent chancellor.  She also acknowledges in the article that she and Conway talk at least every other day.  Since Conway announced his retirement she says they talk even more.

Surely they discussed firing the football coach, the AD and the basketball coach in advance of her taking over the position.

So either Conway did Dixon a solid by putting his name on all of the firings, so she wouldn’t begin her tenure with blood on her hands. Or the performance of the Athletic Department was Conway’s mess to fix and he just put it off until the bloody end.

Dixon may very well shake things up some more this summer but firing academic folks don’t get the same headlines as firing coaches.  So rightfully so or not, Conway performed some of the heavy lifting on his way out.  With a nice pension laying in wait after a 40 plus-year career in the UNC system, this wasn’t an ideal time for him to buck the system in any way.

Watch things very closely at Elizabeth City State if it has a special place in your heart.  There was no national search conducted to put Dixon at the helm of Elizabeth City State. The same was true for Conway. Dixon was personally selected by UNC President Margaret Spellings to be on the co-leadership group and to be the interim chancellor.  The hiring of Spellings was controversial, to begin with after the dismaying dismissal of former UNC President Tom Ross.  Faculty, staff and students across the UNC system held protests to denounce the hiring of Spellings, who was the former education secretary for George Bush from 2005-2009. She also oversaw the initial implementation of the often criticized No Child Left Behind program.

So the specter of Spellings being a puppet master is still a valid fear for some.  The summer of 2016 and N.C. Republican Senator Tom Apodaca’s  Senate Bill 873 isn’t far from people’s minds either. The threat of Elizabeth City’s future and the legacy of its name survived a real threat two years ago, could it survive again?

Dixon has been a loyal soldier at the UNC General Administration, having served under both Ross and Spellings. Now she will serve the students, faculty, and alumni of Elizabeth City State. Let’s see what happens next.