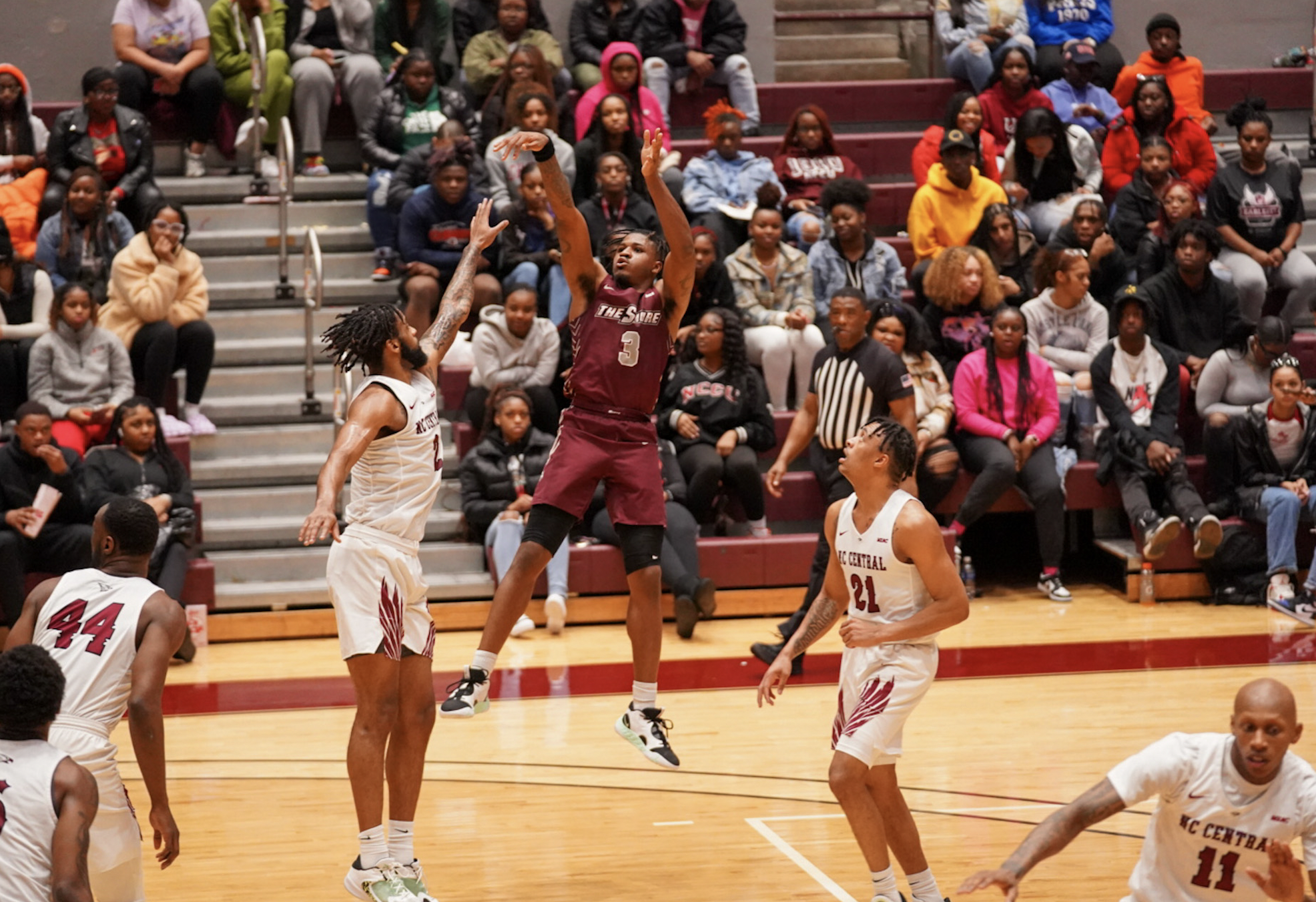 Maryland Eastern Shore staged an improbable comeback in the final minute to knock off NC Central in a battle of MEAC leaders.

DURHAM, NC – Maryland-Eastern Shore staged an improbable comeback from seven points down in the last 90 seconds to stun a raucous home crowd at NC Central with a 59-58 win here Monday night.

UMES senior guard DaShawn Phillips stole a long pass into the NCCU backcourt and hit a twisting layup to tie the game at 58 as he was fouled with 22.4 seconds to play. He sank the free throw to give UMES its only lead of the game. Phillips’ points were the last of an 8-0 Hawks’ run to close out the game after trailing 58-51 with 1:22 left.

After an NCCU timeout, guard Justin Wright dribbled the clock down before trying a contested driving layup with just :01 second left. NCCU got its hands on the rebound as the clock expired.

The matchup was between teams with identical 10-8 overall, and 3-1 MEAC marks. They were two of five conference teams tied at the top of the league with 3-1 records.

MDES closes in a flurry

Donchevell Nugent’s 3-pointer with 3:36 left cut the NCCU lead to 56-48. UMES closed to 56-51 on a two Nathaniel Pollard Jr. free throws. But Eric Boone then beat the shot clock to score on a runner in the lane to push the lead to 58-51.

Zion Styles swished a 3-pointer with 40.5 seconds left to cut the lead to 58-54. Pollard then stole an NCCU pass at midcourt and drove for a basket to pull the Hawks within 58-56 with :28 ticks on the clock.

NCCU called timeout and then threw the ball deep into the backcourt that Phillips intercepted for the game-winning play.

NCCU was done in by 24 turnovers, none more costly than the final one that decided the game. Justin Wright had 19 points to lead the Eagles. Medley-Bacon had 11 points, seven of the Eagies first nine points to open the game. Eric Boone added nine points and a game-high 13 rebounds.

Styles and Nugent both had 13 points to lead MDES. Pollard had nine points and led the Hawks off the boards with nine rebounds. MDES has never won an MEAC title. The Hawks have now won four straight MEAC contests after losing its conference opener to Norfolk State. The Hawks had 12 steals in the game.

In another match of conference leaders in Baltimore Monday, Morgan State led wire to wire in knocking off two-time defending champion Norfolk State, 77-71. Howard won at Coppin State, 90-76. Howard, Morgan State and UMES are now tied at the top of the MEAC with 4-1 conference records.