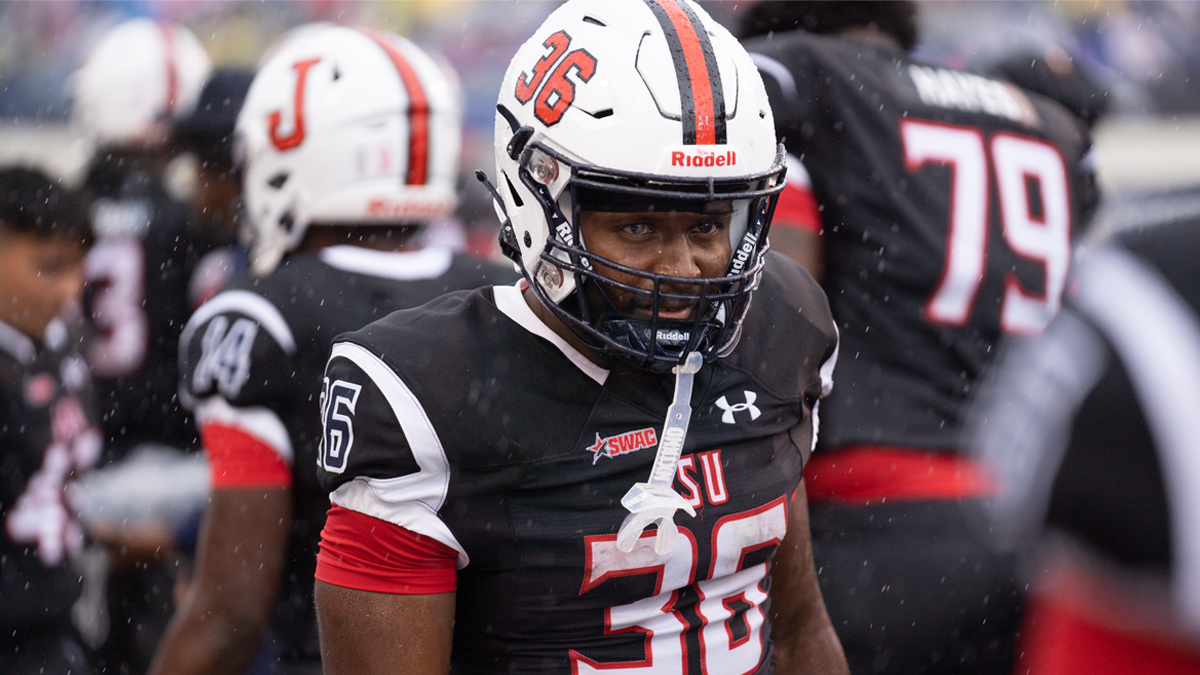 Sy’Veon Wilkerson came to Jackson State to play for Deion Sanders. Though Prime is gone, he’s found a home.

The running back started his career at Delaware State in 2021, where he led the MEAC in rushing attempts as a freshman (220), while finishing second with 848 rushing yards and eight touchdowns. He hit the transfer portal that November, and he says he had eyes toward Jackson State.

“When I entered the transfer portal the first time, I wanted to come play at Jackson State for Coach Prime,” Wilkerson told Jeff Lightsey in an interview. “That’s what I wanted to do and God made it happen.”

Wilkerson took a visit to Jackson State during the 2021 SWAC championship game. But he then got an offer from West Virginia, where he enrolled and practiced in the spring before getting back into the portal. This time, he landed at Jackson State.

Despite his accomplishments at Delaware State, Wilkerson had to earn his Tiger stripes. It took a couple of practices and a few games, but it happened.

“When I finally got that opportunity and I was able to play my first game at Jackson State against Grambling, where that was my breakout game, because I had started — it was just surreal,” Wilkerson said. “And it was emotional for me in the beginning because of everything that I had went through to the year.”

Sy’Veon Wilkerson rushed for 141 yards and two scores against Grambling State that day. He breathed much-needed life into the Jackson State running game in 2022 as he rushed for 1,152 yards and nine touchdowns.

Wilkerson’s runs gave Shedeur Sanders a security blanket and helped Jackson State repeat as SWAC champions and return to the Celebration Bowl. North Carolina Central handed JSU its first loss of the season in a 42-35 overtime thriller. Wilkerson said it took a while to compute that his team actually lost the game.

“It didn’t seem real when — after that last play — they were storming the field,” Wilkerson told Lightsey. “We expected to win, no matter what. Even though it was a close game — we weren’t expecting it to be a close game — although it was, we were expecting to come out with the win. It didn’t really hit me until the day after.

“Things happen,” he continued. “I hope they make it back so we can play them again.”

Like all players at Jackson State who came to play specifically for Deion Sanders, Wilkerson had a choice — to stay or to try his luck in the transfer portal again.

“After praying about it, talking to family and stuff like that, talking to certain people — I just felt in my heart God was leading me to stay,” Wilkerson said. “I didn’t have any bad experiences here at Jackson State. Obviously, I came for Prime, but other than that — outside of Prime — I didn’t have any bad experiences at Jackson State, on or off the field.”

“This is the first school I’ve been to that actually felt like home to me,” he said.

Jackson State is now squarely in the post-Deion Sanders Era as T.C. Taylor is now the program’s head coach. As someone who came to the program to play for a man that is no longer there, Wilkerson is arguably the most vocal current player on social media for Jackson State. He’s spent the entire off-season wooing talented players to play for the two-time defending SWAC champions — including former Delaware State teammate Esias Guthrie.