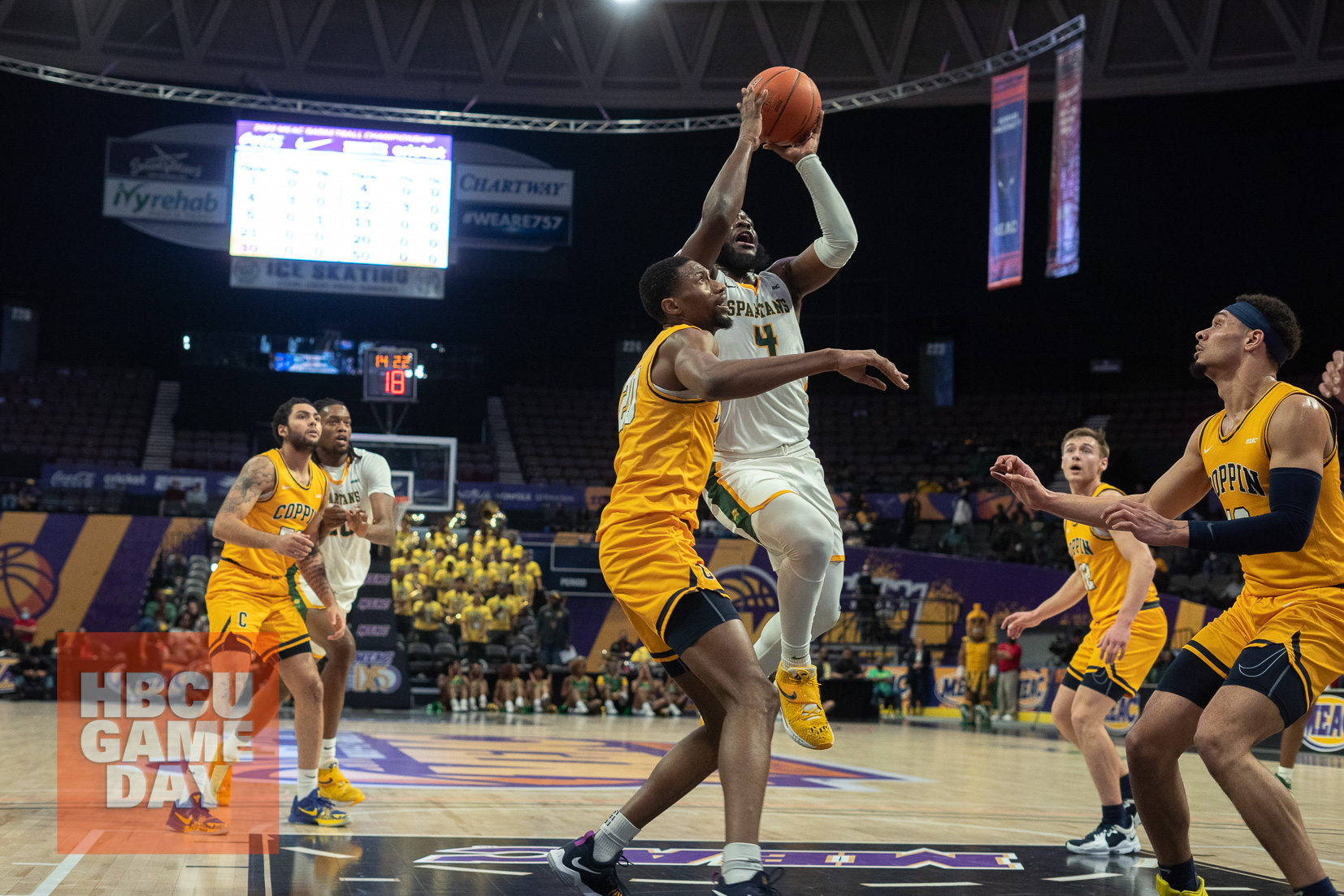 Norfolk State took care of rival Hampton in Las Vegas on the opening day of the Chris Paul HBCU Challenge. It faces another MEAC foe on Sunday.

Bryant finished the day with 23 points and 14 rebounds, easily clearing the 6-1 guard’s previous career high of 10 on the glass. He knocked down six 3-pointers while dishing out three assists as well.

Four Spartans scored in double figures on Saturday: Bryant, Cahiem Brown (15), Kris Bankston (15), and Christian Ings. Brown racked up 11 points in the second half, helping the Spartans close out the win by making nine free throws.

As a team, the Spartans certainly took care of business from the charity stripe. NSU shot 19-of-23 (82.6 percent) at the free throw line on Saturday, their best mark of the season when taking 15 or more free throws.

Brown opened the game with a pair of mid-range jumpers, before Daryl Anderson hit a 3-pointer to give NSU a 7-3 lead. A 9-0 Hampton run gave the Pirates the momentum, eventually allowing Hampton to go ahead 18-11.

Bryant knocked down a 3-pointer before Terrance Jones did the same, setting off a 20-2 run by the Spartans that turned the tables. Bankston, who battled foul trouble for most of the afternoon, forced down a two-handed slam and got a layup to fall through contact on the next play.

Bankston hit the ensuing free throw, completing the three-point play the old-fashioned way. The 6-9 forward made all five of his attempts at the line on Saturday.

Hampton ended the half strong to cut the deficit to five at the break, before using multiple 3-pointers to gain a two-point lead early in the second period. Bryant halted the run with a corner three to push NSU ahead once more, and the Spartans wouldn’t trail again the rest of the day.

Bryant may have cleaned the glass with command on Saturday, but he found a way to use it on the offensive end as well. Freeing up space with a crafty stepback, he used the backboard to convert from deep late in the second half.

Bryant isolated his defender less than a minute later, scoring the bucket with a foul for a three-point play. Bryant banked in another shot from behind the arc on the team’s next offensive possession, and added one more deep ball a minute later, giving him the Spartans’ last 15 points.

The hot stretch helped NSU extend its lead to double-digits, cruising the rest of the way to a 12-point victory.

Norfolk State returns to the venue tomorrow for the team’s second and final matchup of the event, a 2 p.m. ET tip (11 a.m. local) against North Carolina A&T.