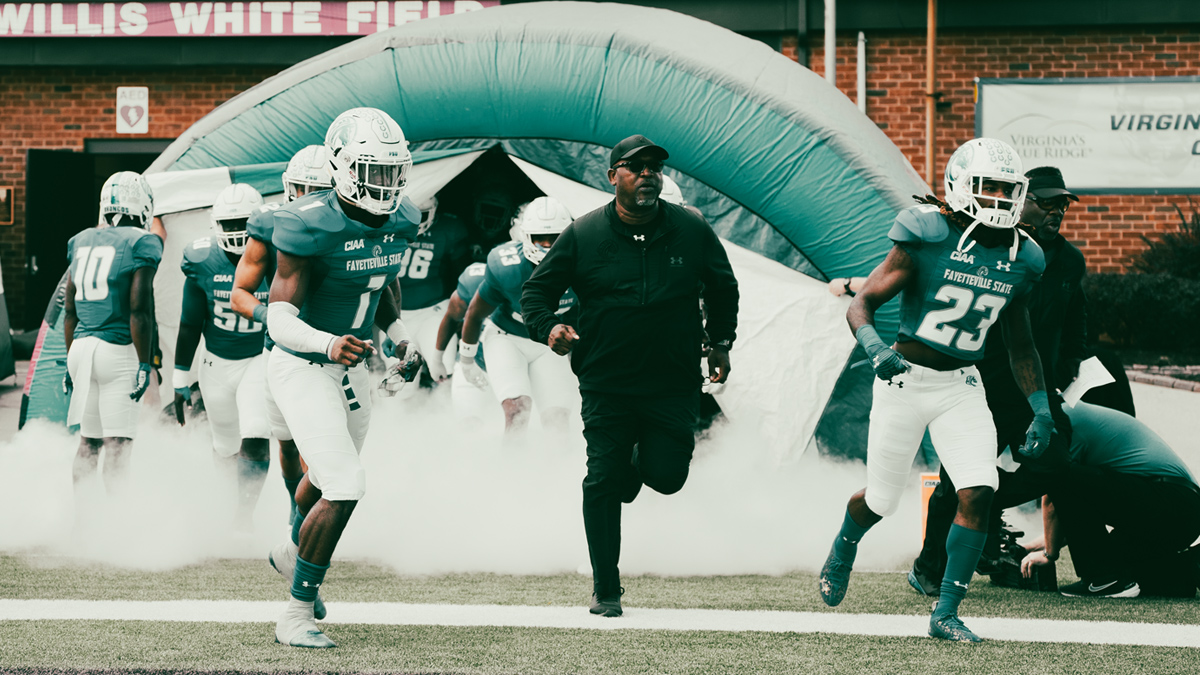 The number five is a significant one for CIAA champ Fayetteville State and its head coach.

It is fitting that five seconds remained on the clock for Fayetteville State as it sent Elton Andrew out to win the CIAA Championship Game.

The number five is significant to FSU, and its head coach, for a multitude of reasons.

Four consecutive seasons this Richard Hayes Jr. and Fayetteville State made the drive from the Sandhills of Fayetteville, NC to the autumn-tinged mountains of Salem, VA to take on the CIAA North Champion only to return home with a consolation trophy.

But this time — the fifth time — would be different. Andrew’s 43-yard kick boomed through the uprights, giving FSU a 31-28 win and the storybook ending it had been denied for so long.

“It’s just one of those things where it’s kind of unrealistic to me because…I’ve had game-winners before. But a game-winner in the  CIAA Championship. That’s just crazy to me,” Andrew said after the game. “But I knew everything that coach has put in to me —  all the trust — like I’ve never had somebody that actually “like, hey, you can do this.” So I know I owed it to him and my team to be able to do it and I did it.”

A lot of coaches in a similar situation might purport as though the tortured history of their program at one particular place for years on end didn’t have any impact on the game. Hayes was transparent in his answer.

“We had to think about it,” Hayes said of the decision to try a lengthy field goal. “But again, when you been here four times in a row, lost and you look up at the score —  it’s less than a minute on the clock and is tied 28-28 in the ballgame in your hand, on your side of the field. I ain’t finna give him (Chowan coach Mark Hall) that ball back. So yeah, we went for it.”

“I was told early in the week to take more chances,” Hayes continued. “You know, I’m a defensive-minded guy and I’m all about field position. We had field position. They practice against the best defense in the conference every day. And it worked on our defense, so I know it will work against anybody else.”

Hayes didn’t point out who gave him the advice, but there was a good candidate waiting in the wings.

The younger Hayes spent many of his Saturdays as a young kid watching his uncle do battle in the CIAA, often playing for championships. Four consecutive years in the 1980s, Bill Hayes’ Winston-Salem State program dominated the league’s southern division only to fall short four consecutive times. He finally broke through in 1987 on a frigid cold game against Hampton University. The younger Hayes remembers that game well, as he was watching on the sidelines.

Thirty-five years later, on the other side of the Commonwealth of Virginia, Bill Hayes got a chance to watch his nephew exorcise his championship game demons.

“I was just absolutely overjoyed. You know, I know what my nephew has put into it — really he’s my son,” Hayes said on the field as Fayetteville State celebrated. “And to watch him struggle through the years to get to this point is is beyond anything… I mean, my greatest, greatest dreams and it’s all worth it when you go through that struggle of trying to overcome.

And finally, he overcame and I’m so happy.”

There are more parallels between the Hayes’ and the makeup of their championship squads. Both men made the decision during their seasons to put the ball in the hands of the freshmen quarterbacks — Bill Hayes going with a Fayetteville native named Connell Maynor while Richard Hayes opted for two — Demari Daniels and Caden Davis. (The Numerology number 5 is a master of change, able to go with the flow and adapt itself to thrive in different environments and social situations, for what its worth.)

Broad-bodied Davis bullied his way into the end zone for the score to tie the game at 28 while Daniels threw two touchdown passes and was named the championship game’s MVP.

Richard Hayes made the decision to go with youth after a…win…against…Chowan.

“It was time to give our offense a spark going to our homecoming game. We knew we had a lot of fans coming. We threw him in. He said he was ready. We gave it to him,” Davis said. “Him and Caden Davis, took us all the way from Week Five, all the way to the CIAA Championship. Our two freshman quarterbacks. We’ve got ’em for three more years. Watch out.”

The elder Hayes said he did give his nephew some words of advice before and during the game.

“We knew that were going to pressure him on defense. And we talked about taking some shots down the field and getting them off of him, making the defense back up a little bit. And then we talked about how to stop the option play and talked about it at halftime and but I’m just so happy for him more than you could ever imagine.”

His nephew was obviously overjoyed as well. After watching his uncle’s Hall of Fame career unfold and then being a part of championships as an assistant at NC A&T and WSSU, he finally led his program to a title.

“Well, I was trying not to cry because I was just so happy for the players and I was happy for this guy and everybody around me. And so trying to just hold it all in, and it kind of got masked when they poured water on me, and the water and tears mixed together, so I played it played it off,” Hayes said with a smile. “But no, in all seriousness, it felt really good to know that all the work I put in over the years from being a coach, being not being the coach, and having to work a regular job to then Connell Maynor giving me another chance to be on college football coach — to the point I am right now, man, I’m really grateful.”

After the game was over, Hayes spoke to his current team in the locker room and then headed over a few feet away to wait for a press conference he had been waiting to give his whole life. A few young men came by to give their congratulations. They were former Fayetteville State players who helped build up to Saturday’s results.

Hayes pointed out that every year his team came to Salem, prior to Saturday, it faced an unbeaten or nationally ranked team in the title game and fell short. But in a sports world that measures everything in wins and losses, Hayes knew what many thought about his program — but he also knew what he expected out of it.

“But we just kept fighting, kept believing that we could do it,” Hayes said, with his usually baritone voice rising. “Every year I came and sat in this in this room after a loss. I told you, we’ll be back next year. I told y’all that, go look at all the interviews.

The media in the room, many of us who had been in that room as his team after each of those losses, nodded and agreed on the other side of the platform.

“So that means that I never quit,” he said tapping the table. “We never gave up. We never believed we wouldn’t come back. Some people come one time and never get to see it again. We’ve seen it five times in a row. And guess what? We have a young football team, we might see it again next year. So expect to see us sitting here.”