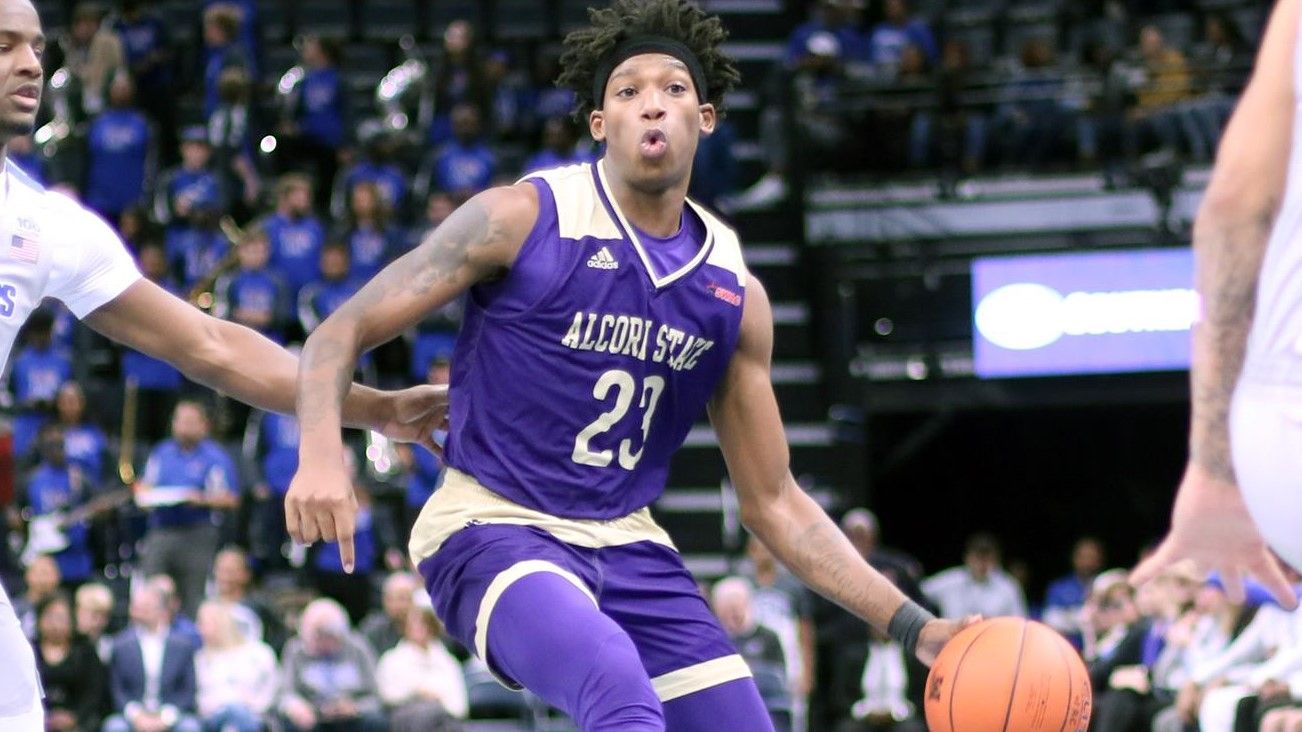 WICHITA, Kan. – After seeing an early lead evaporate on Saturday night at American Athletic Conference (AAC) foe Wichita State (1-1), the Alcorn Braves (1-1) firmly stayed the course and reaped the rewards. Using attacking defense and accurate shooting, the Braves stayed within striking distance until they took the lead for good in the final 8:27, stunning Shocker fans with a 66-57 final at Charles Koch Arena – arguably the most high-profile victory for the program so far under head coach Landon Bussie.

After going toe-to-toe with Ole Miss in Oxford in the season-opener, the Braves came ready to execute to the final buzzer in game two. After Trevin Wade pulled up for a three to take a 9-6 lead just under three minutes into the game, Alcorn held WSU off the board and launched into a 10-0 run over the ensuing five minutes.

However, the Shockers regained their footing as the half progressed, chipping away at the Braves’ advantage until they were able to knot the score at 24-all on a pair of free throws by Jaykwon Walton with 3:39 to go in the half. Wichita State took its first lead of the afternoon on a putback by Walton just one minute later. The Shockers built up a five-point lead, but Oddyst Walker stepped through traffic for a layup to trim the deficit to the halftime margin of 31-28.

Wade was instrumental in keeping Alcorn State around, scoring 10 in the first half with a pair of steals. That contribution didn’t yield in the second half, slicing the WSU lead to one point by taking a Walker steal the distance on a fast-break layup at 16:24. Dominic Brewton started heating up in the second half and briefly pulled Alcorn back in front with a drive straight down the left side to go ahead 37-36.

However, the Shockers fought back, and limited the Braves while rebuilding their lead out to five throughout the middle of the period. Beginning with 11:05 to go and a pair of Keondre Montgomery free throws, enough was enough for the Braves. A Shaun Walker putback brought the deficit to 46-45 and then pulled up at the stripe for the go-ahead bucket with 8:27 remaining – finding the open seam off a Wade assist.

With the upper hand, the Braves hit the glass and forced the Shockers into turnovers to go ahead seven while stringing together a three from Montgomery, a Jeremiah Kendall fast-break layup and a pullup trey by Byron Joshua on the arc with four ticks on the shot clock at 4:29. Byron chipped in another key shot, driving the baseline to drain a jumper that would secure an eight-point lead for the Braves with 2:47 remaining.

Holding onto a five-point advantage, Joshua broke the WSU press by finding Montgomery all-alone for a dunk on the break to seal the high-profile victory for Alcorn – ending with a final line of 66-57.

Leading a 45.5-percent shooting effort for Alcorn State, Wade logged 14 points with a pair of assists, while Brewton scored 11 of his 13 points in the second half. Taking the line for five of Alcorn’s 11 free throws, Montgomery scored 11 and paced the squad with seven boards.

After a hearty locker room celebration, the Braves head back south with a swing into east Texas for Stephen F. Austin on Nov. 15, in Nacogdoches at the William R. Johnson Coliseum.