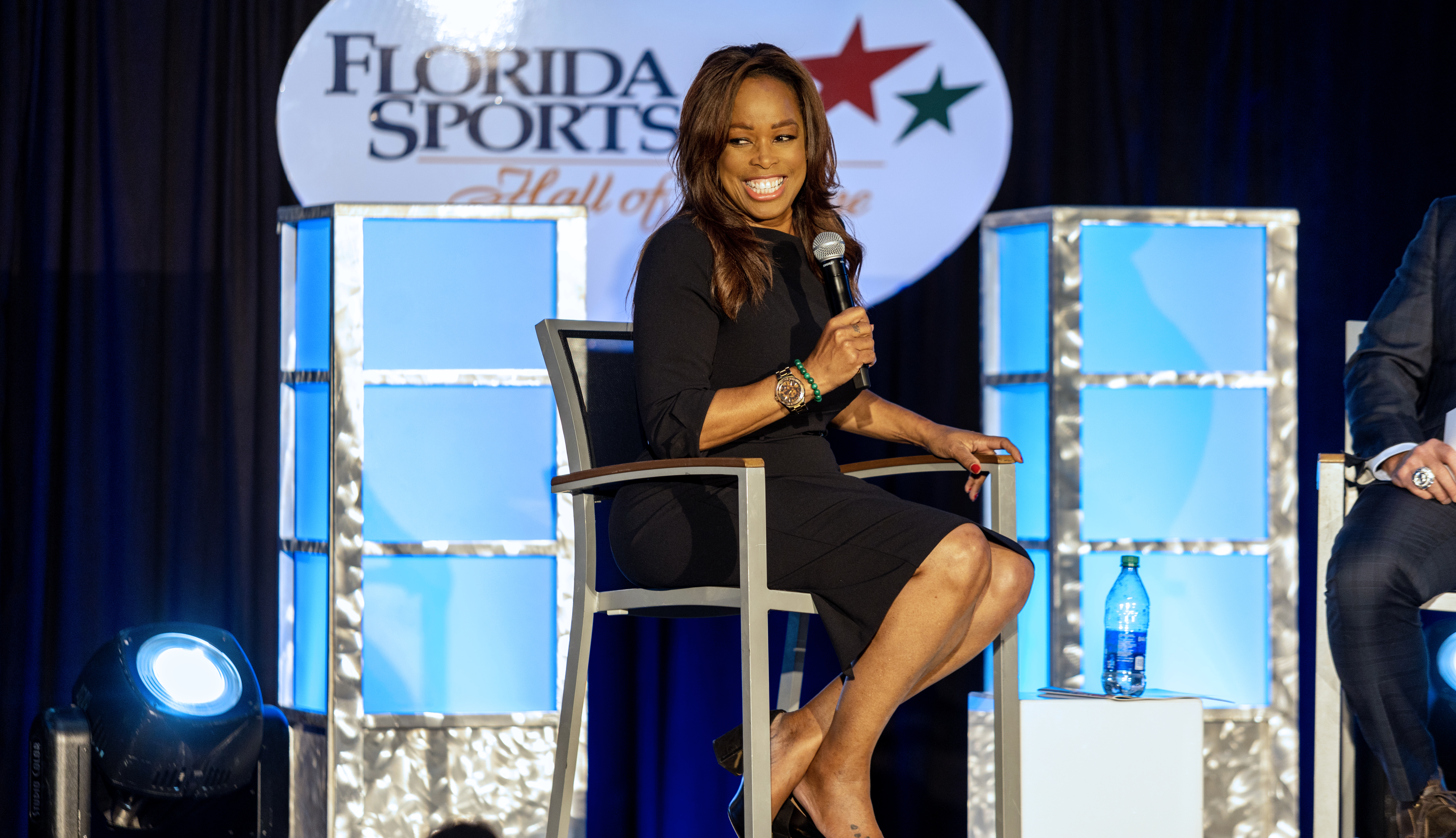 Florida A&M alumna Pam Oliver is proud to rep her HBCU, and others.

Former Florida A&M University All-American track star and current Fox Sports sideline commentator Pamela “Pam” Oliver was inducted into the 2022 Class of the Florida Sports Hall of Fame in a lavish ceremony inside the club level of Raymond James Stadium in Tampa,Fla.  Oliver, who took a crucial day of work to attend the ceremony, had to jet out of Tampa and head to Phoenix to prepare for Sunday’s NFL game between the Arizona Cardinals and the Seattle Seahawks.

Oliver joins a list of FAMU great athletes and coaches enshrined in the Florida Sports Hall of Fame.  From humble beginnings in Niceville, Fla., Oliver was a multi-sport athlete in high school at Niceville High School.  From there she attracted the attention of legendary FAMU track and field coach Bobby Lang.

Pam Oliver would come to FAMU on a track scholarship and blossom into a stellar athlete.  For years she held the Florida A&M and MEAC record for the 400-meter dash.  She was also a part of an amazing All-American 4x400m relay team. Partnered with Mary Jones, Vogel Newsome and Pamela Porter, Oliver and her squad made the national championship meet in 1984 and was honored as All-Americans.

Her aspirations started as a child

A journalism student at FAMU, Oliver always had visions of being on television, but sports reporting was very limited for women at the time…especially in football.  “ I had this dream as a very, very  young girl and I never let go of it, talking in the mirror with my hair brush,” Oliver said.  “It was a dream to be a television reporter and I just never let go of it.  And even to this day, I’ve done 500 football games and been at this for over thirty years.  I’ve done news and sports and I feel like I’m living this dream.”

She is reknown as a trailblazer in the sports media landscape, establishing herself as one of the premier sports reporters.  She has broadcasted eight Super Bowls.  She cut her chops on ESPN and worked on the NFL Matchup show for Monday Night Football.  She climbed her way to working with what is considered the best broadcast team of all times in Pat Sumerall and John Madden during her decades career working with Fox Sports.

But, that’s not how it started.  Once she graduated from FAMU, she was hired first as an agriculture reporter, a far cry from her dream.  Her aspirations of being a sports anchor fell on deaf ears to station management.  She went from agriculture reporting to covering the space program at Cape Canaveral.

One day, the sports reporter fell ill and Oliver jumped at the chance to fill in.  She did so that night, but was still not given the opportunity of a permanent position.  “I remember going from news to sports at that point in my career because I had been a news reporter for nine, 10 years and could not get a job in sports…the door was closed.  I kept trying to break it down, but that door was closed and I finally was able to make that leap.  My news director told me ‘this is the biggest mistake you’ll ever make.  No one will ever hear from you again.’  It all worked out,” she said.

“I still pinch myself because you get to go cover football…it’s not a bad gig.  Football is fun.  There’s nothing that says it’s gender specific for you to recognize a safety blitz…where is that written? I don’t play that game…How could you know that much about football when you’re a woman?  Buddy, I know way more about football than you’ll ever know.  I’ve forgotten more football than you’ll ever know.”

Pam Oliver is very proud of her HBCU roots

“Every time an HBCU is mentioned, I’m like YEAH!  Not just Florida A&M.  We’re kind of en vogue right now.  I don’t care why or what as long as we stay there and let people understand what we’re about, that’s the message that I hope is not lost in the whole glamourizing of HBCUs,” Oliver stated.  “I want people to really understand why they exist, why they were formed and all of the reasons behind it.  So many people these HBCUs have produced to me is staggering, but I love the fact that so many people are paying attention to HBCUs.”

Oliver is a two-time member of the FAMU Sports Hall of Fame.  She was inducted individually for her MEAC record, and a second time with her 4x400m relay team.  She also has the distinction of having a studio named after her n the FAMU School of Journalism and Graphic Communication.

“For all of the FAMU people that came out today and showed me all that love and support, I’ll never forget it, it means the world to me.  To be inducted into the Florida Sports Hall of Fame, I didn’t see it coming, but now that it’s here, I’m on top of the world,”  Oliver said.

Other FAMUans in the Florida Sports Hall of Fame: