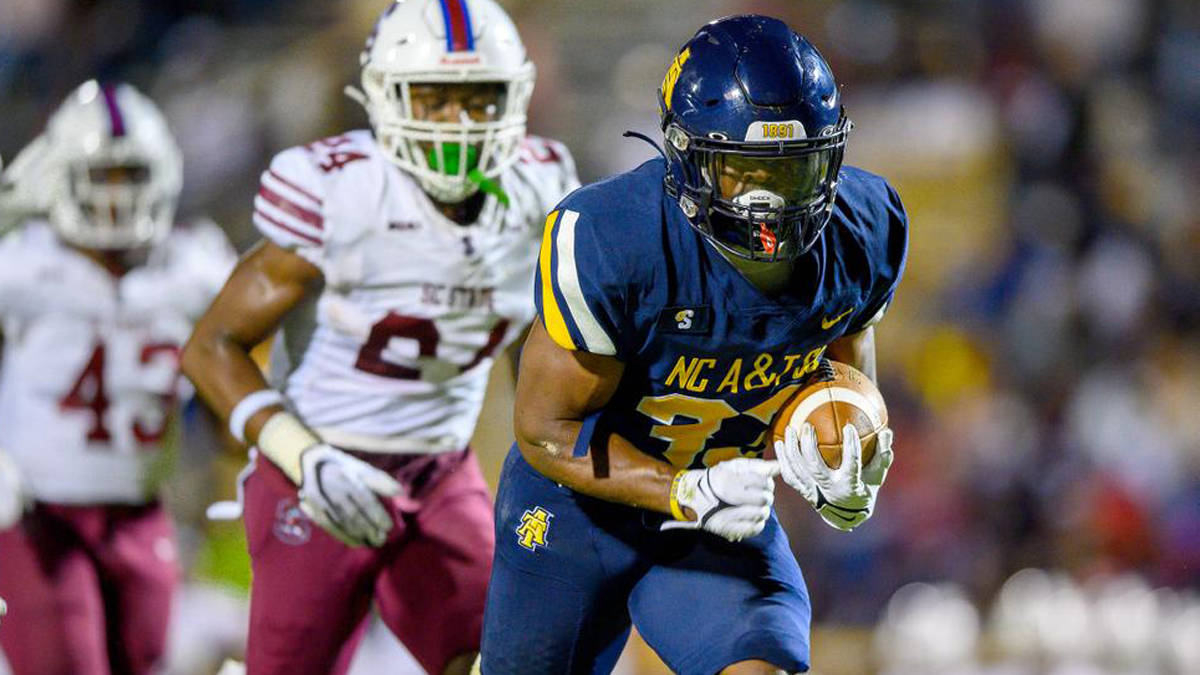 NC A&T coaches say ‘the sky is the limit’ for talented back Bhayshul Tuten.

NC A&T sophomore running back Bhayshul Tuten is halfway towards his goals for the 2022 season.

“It’s been a good season but I feel as though it could be better,” the Paulsboro, New Jersey native said Thursday. “We’ve still got four regular season games left, so I’m just willing to get better each week. Who tells? The sky’s the limit.”

The sky’s the limit

“The sky’s the limit’ has certainly been the feeling among NC A&T coaches since Tuten arrived on campus a year ago. It was clear his touches would be limited last year playing behind senior and preseason all-Big South running back and player of the year Jah-Maine Martin. But when he did touch the ball, he flashed greatness.

With only 37 carries for 215 yards last season as a freshman, he averaged a healthy 5.8 yards per carry. He also had three receptions for just 71 yards. On one swing pass, he rambled through a North Alabama defense on a 60-yard touchdown.

“The biggest difference between last year and this year is that last year I only had about 40 carries,” Tuten said. “Now, I’m up to 130 carries going into this week. So, I feel with more game reps, I get more so of a feel of football in college.”

So far this season, Tuten has rushed for 776 yards on 120 carries through seven games. He’s averaging 6.5 yards per carry and 110.9 rushing yards per game. Heading into this week’s Big South showdown with Campbell at NC A&T’s homecoming, he has rushed for over 100 yards now in six straight games. With Tuten doing plenty of the heavy lifting, the Aggies have won their last four games after an 0-3 start. They are 4-3 overall and tied with Campbell and Gardner-Webb atop the Big South standings at 2-0.

His retort was “It’s hard to stop Tuten. That’s all I would say.” The young man is not lacking in confidence. He says his greatest asset is being “a dual-threat running back.”

“Some backs are inside runners or outside runners,” he said. “But I can run inside, I can run outside, I can catch out the backfield. So, I have a different variety of stuff that I can do. So your game plan has to be more on point for a running back like me.”

He’s also first on the team with 19 catches and is among the team leaders with 205 receiving yards and two TDs. He took a swing pass last week against Robert Morris for a 52-yard touchdown.

After watching him for several games, it appears that he just does not like to be tackled. He has the uncanny ability to make a quick move to avoid a would-be tackler, side step or change direction in an instant and blow past defenders leaving them at a standstill. Those are not bad traits for a running back.

He is the runaway leader in the Big South in rushing stats and currently sits tenth in the FCS. He is second in the league with six rushing touchdowns.

In his senior year at Paulsboro High School in South New Jersey, the 5-9, 193-pounder rushed for 1,229 yards and 19 touchdowns. Tuten was more productive as a junior, rushing for 1,449 yards and 24 TDs. He finished his four-year career at the school with 3,529 rushing yards and 53 touchdowns. He clocked at 4.4 seconds in the 40-yard dash in high school.

“I feel as though I got faster over the offseson,” Tuten said. “Me and Coach (NC A&T strength and conditioning coach Faris) Ali, we practiced it, drilled it, and I think as my body’s getting older it adjusts to it and the outcome is, faster.”

Striding towards his goals

His favorite run of the season was on a direct snap he took in a home game in the Aggie’s Truist Stadium vs South Carolina State. “I was running left and bounced off right, then broke up the middle while I was stumbling,” he said.

“Did you score,” he was asked. “Of course I scored,” he responded.

Aggie fans will remember the finish as he flipped in mid-air into the end zone to complete the scintillating 38-yard run. I’d have to agree, that run was special.

His goals on the season were to lead the conference in rushing, throughout the season, 1,300 rushing yards and about 12 touchdowns. He’s halfway there.

“I definitely think I’ll get it,” he said. I don’t doubt it.

334
The Latest in HBCU Sports and Culture