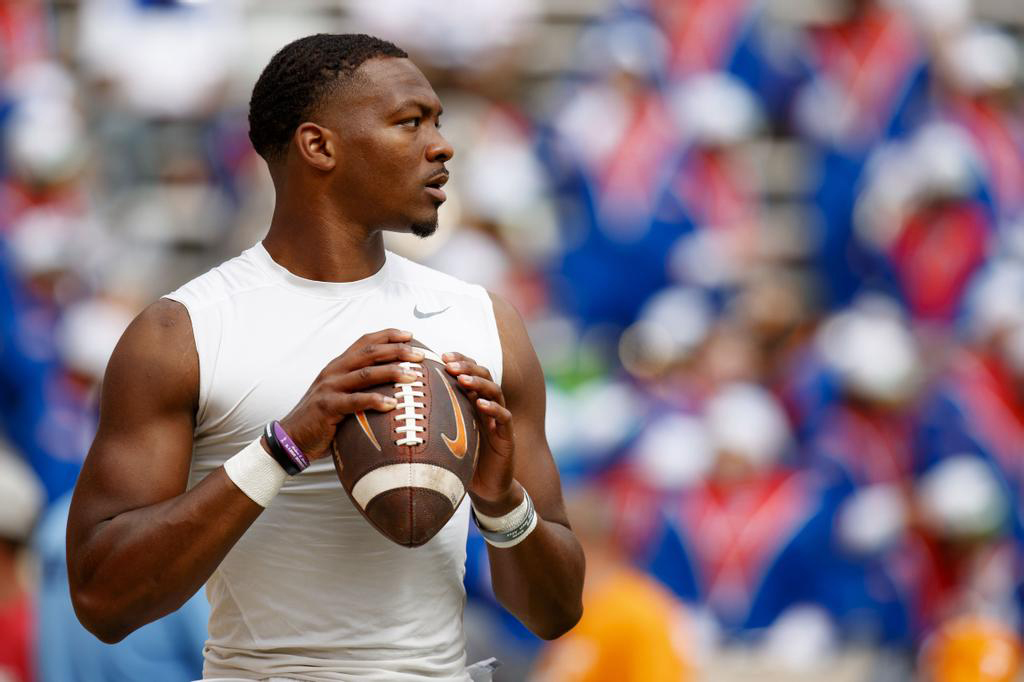 With his outstanding play, Tennesse QB Hendon Hooker is rekindling a “Hooker for Heisman’ campaign that began 36 years ago with his father, former NC A&T QB Alan Hooker. Another son of an HBCU product with the Vols, Cedric Tillman Jr., could be a key part of Hooker’s Heisman quest.

In 1986 and 1987, Alan Hooker’s last years playing quarterback at NC A&T, the sports information and marketing department at the school started an HBCU Heisman Trophy campaign dubbed, ‘Hooker for Heisman.’

Posters, bumper stickers, T-shirts and the like touted the Aggies’ featured player for the award that goes to the nation’s top college football player.

Well, it’s time now for another ‘Hooker for Heisman’ campaign.

But the focus this time will be on Alan’s son, graduate Hendon Hooker, the starting quarterback for the undefeated (4-0) University of Tennessee Volunteers.

Through four games, the 6-4, 218-pounder has thrown for 1,193 yards and 11 touchdowns without an interception. He is averaging 298.2 passing yards per game while completing 71.6 per cent (81 of 113) of his passes. Hooker has added another 175 rushing yards and three rushing touchdowns.

Hooker, a Greensboro, NC native and Dudley High School graduate, has helped make Tennessee relevant again. The Vols are ranked eighth in the FBS AFCA (Coaches) poll and AP Top 25. This is their highest ranking since they were seventh during the 2006 season.

Boosting Hooker’s Heisman profile have been two outstanding performances in down-to-the-wire wins over Pitt and Florida.

Playing at Pitt on Sept. 10, Hooker hit on 27 of 42 passes for 323 yards and two touchdowns. The latter of the two passing TDs came on a 28-yarder to wideout Cedric Tillman in overtime for the game-winner in a thrilling 34-27 victory.

Two weeks later at home in Knoxville before a sellout crowd of 101,915 at Neyland Stadium vs. Florida, he was even better. Hooker hit on 22 of 28 passes for 349 yards and two TDs and added 112 rushing yards on 13 carries and another TD in a 38-33 win. His 461 total yards was a career best and ­­ran his total of TD passes as a Vol to 39 with only three interceptions in two years in Knoxville.

It was the first win for the Vols over the Gators since 2016.

Hooker in the Heisman Trophy race

The 24-year-old Virginia Tech transfer – depending on the Heisman Watch profile one is following – is either second or fourth but certainly in the mix for this year’s coveted trophy.

Despite coming off a bye week, Hooker is the runner-up to Ohio State quarterback CJ Stroud in both The Athletic’s Heisman Trophy straw poll and in the Sportsnaut Heisman Trophy Ballot with odds via DraftKings. In both, he is ahead of Southern Cal QB Caleb Williams and Alabama QB Bryce Young, the 2021 winner.

According to BETMgM, Hooker’s odds of winning are fourth behind Stroud, Williams and Young.

He is fourth on the Game Haus lists behind that same trio. Hooker is listed at No. 3 in the ESPN “Heisman Five’ rankings.

The case for Hooker

Hooker is certainly holding his own against the competition.

Hooker’s Heisman fate will likely be determined during an upcoming key stretch of SEC games.

It begins with a date at LSU this Saturday.

“Tennessee’s offense, which leads the nation with 559.3 yards per game and is second in scoring at 48.5 points per, could cause LSU fits,” said Cory McCartney of Fansided this week. Tennessee hasn’t beaten the Bengal Tigers however since 2005.

The Vols return home in Knoxville next week (Oct. 15) to do battle with No. 1 Alabama. A win or great outing for Hooker in that game could vault him to the top of the competition.

After hosting UT-Martin, an in-state FCS program on Oct. 22, the Vols face No. 13 Kentucky at home on Oct. 29. The last game in this stretch is against No. 2 and defending national champion Georgia in Athens on Nov. 5.

The path to the Heisman seems to be opening for Hooker.

Young’s bid to repeat as the Heisman winner took a hit when he injured his shoulder in Alabama’s 49-26 road win last week over Arkansas. Reports say he has been ruled out of the Crimson Tide’s game Saturday vs. Texas A&M.

Stroud threw for just 154 yards, completing just 13 of 22 passes for two TDs with an interception last week in a 49-10 win over Rutgers. The Buckeyes (5-0) play at Michigan State Saturday.

The other big UT HBCU connection

Hendon is not the only Tennessee Vol with an HBCU connection.

His favorite target, senior wideout Cedric Tillman, who caught the game-winner vs. Pitt, is the top returning receiver in the SEC. He caught 64 passes from Hooker a year ago for 1,081 yards and 12 touchdowns.Tillman had nine receptions for 162 yards in the win over Pitt.

His father, Cedric Tillman Sr., played wide receiver at Alcorn State including one year catching passes from Alcorn legend Steve McNair. Cedric Sr. was drafted in the 11th round of the 1992 NFL Draft and spent four years in the league with Denver and Jacksonville.

The younger Tillman had 17 receptions for 246 yards and one TD through three games before he suffered a high ankle sprain in the 63-6 Vols’ win over Akron on Sept. 17. He had surgery in the days following the injury hoping to speed up the rehab process. The ‘tightrope’ surgery brought former Alabama quarterback Tua Tagovailoa back to the field in about a month a few years ago.

Though Tennessee beat Florida without Tillman in the lineup, his return would certainly boost Hooker’s numbers during this key stretch and bolster the Vols chances for wins.

Another Hooker in the wings

Hooker’s performance against Florida came on the same day another member of the Hooker clan was making his college debut.

Hendon’s younger brother Alston is a redshirt freshman quarterback at his father’s alma mater, NC A&T. While Hendon was torching Florida, Alston, fourth on the A&T QB depth chart, got into his first game as the Aggies hosted SC State that evening. The brothers combined on an inspirational book for athletes last year.

Entering the game midway thru the fourth quarter with A&T up 24-13, Alston missed his first pass. He came back to connect with wideout Sterling Berkhalter on a 22-yard completion, the first of his career. On the play, he was buried by SC State linebacker Aaron Smith who was flagged for a late hit.

Asked why Alston got into the game so late, NC A&T head coach Sam Washington had a ready answer.

“We needed to run the ball, and the kid (Alston) can run,” Washington said. “And he can spin it, too.”