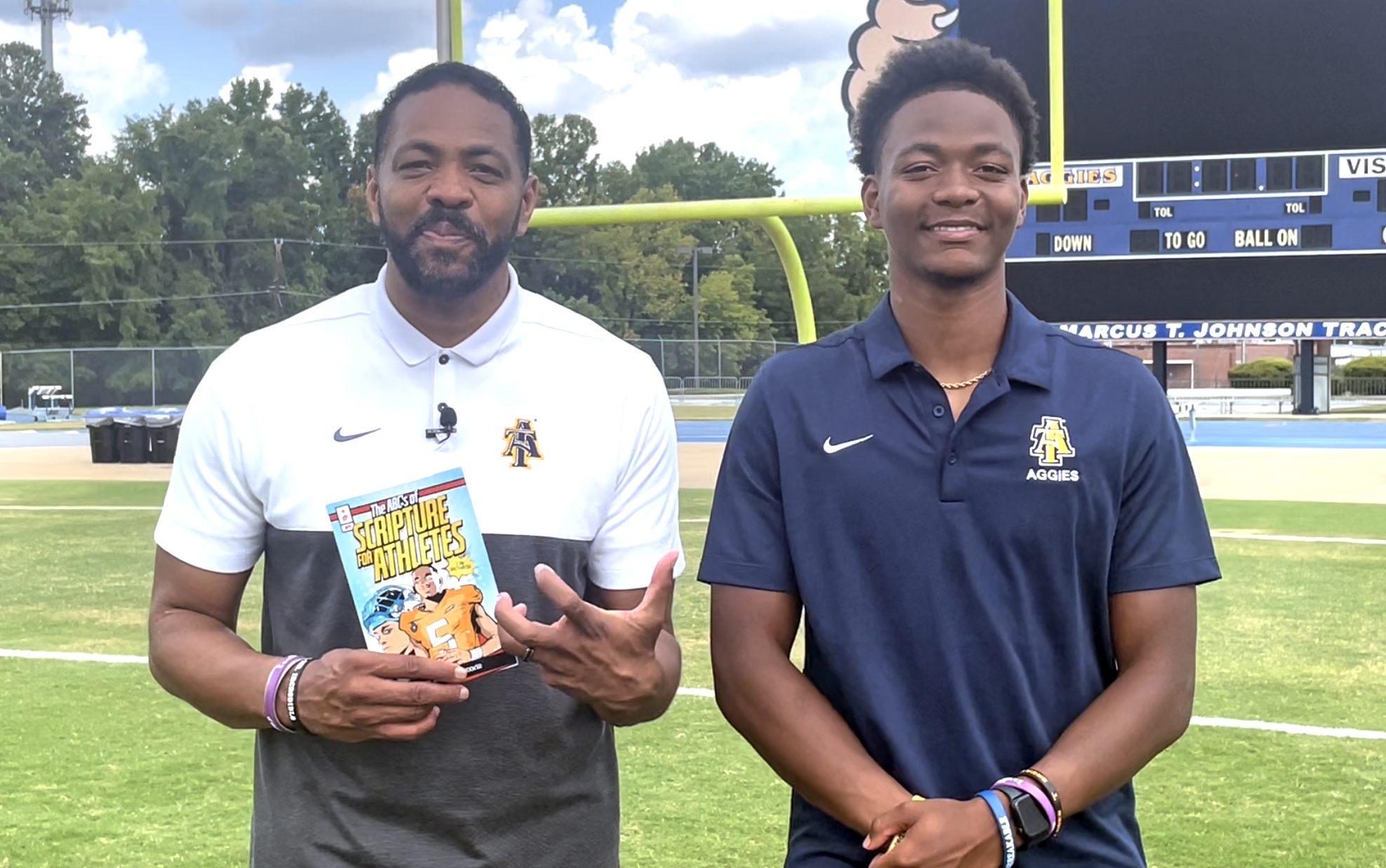 Hendon Hooker and his brother seek to inspire with book

Father Alan (l.) and son Alston (r.) Hooker stand on the field at NC &T. Alston and his brother, Hendon, both quarterbacks, have penned a new book “The ABCs of Scripture for Athletes.”

Tennessee quarterback Hendon Hooker is part of a larger clan from Greensboro, N. C that has three mainstays – faith, family and football – in that order.

They are a close-knit, five member family. It includes father Alan, mother Wendy, daughter Nile, 27, and sons Hendon, 24, and Alston, 21. They coalesce around their shared Christian faith, their love for each other and a deep connection to football. Playing quarterback and being good at it on the high school and collegiate levels are what all the male Hookers have in common.

The faith-family-football tradition has produced fruits for all the family members.

The ABCs of Scripture for Athletes

The most recent fruit is a book authored by Hendon and Alston entitled, The ABCs of Scripture for Athletes. In it, the brothers offer athletes, young and old, key Bible verses to remember as they handle the ups and downs of competitive sports that grew out of their own experiences.

The book includes caricatures of both brothers as they tackled the various challenges on the playing field accompanied by appropriate related verses.

“We came up with the idea simply for other athletes and younger athletes to have a guide and reading opportunity that we desperately needed when we were kids,” Alston said. “We had a few things that we pieced together but I think this is a great opportunity to have one book that you can go from in being an athlete, especially as a kid.”

“This sport brings tremendous challenges,” Alan said, “and both Hendon and Alston have had challenges. There are highs and lows, and the lows are sometimes lower than the level of the highs – especially emotionally.

“When they were young, they would come to my wife and me and we did not have enough wisdom to give them words from us, so we sought the Bible. We would tell them to ‘read this, read this.’ And they started collecting those things, studying them, meditating on them. And so a year ago, they said, ‘let’s do a scripture book, and we can put them in alphabetical order based on our favorites and some of the things we’ve dealt with.'”

Alan, originally from Liberty, N. C., as a quarterback led Eastern Randolph High School to the 1983 N. C. state championship. He had a Hall of Fame career as a quarterback at NC A&T from 1984-87 finishing with 15 school records for passing and total offense and led the Aggies to the 1986 Mid Eastern Athletic Conference championship. He is currently the director of benefits for the Guilford County, N. C. school system and its over 68,000 students and over 8,000 employees.

Wendy, originally from Fayetteville, N. C., has run her own design company, Alabaster Design. She has handled billing for Wescare Professional Services, a mental health company for the past decade. They have been married for 31 years after meeting when both were students at A&T. Both attended Greensboro’s Evangel Fellowship under the leadership of the late Bishop Dr. Otis Lockett Sr. They now attend a satellite branch of the church run by Lockett’s son in High Point, N.C.

“I’d like to take all the credit but I’d be remiss if I didn’t acknowledge my wife,” Alan said. “She did tons to get them started. She would teach them colors and numbers when they were young by using cadences and would use my highlight tape to help manage their behavior.”

The young Hookers dedicated the book to their grandfathers, Edward Leon Hooker Sr. and Nelson Eddie Hendon, the fathers of their parents who they say gave their parents the mantra of ‘faith, family and hard work.’ They also dedicate the book to the elder Lockett, who they term their ‘spiritual grandfather.’ It was Lockett, they say, who inspired their definition of success: Knowing God, doing what he wills in their lives, growing to their maximum potential and sowing seeds that benefit others.

Nile followed in the parents footsteps, attending and graduating from NC A&T with a degree in journalism and mass communications in 2018. She currently works as a client service manager working out of Atlanta for The Familie, a global sports and entertainment agency based in Los Angeles.

Being around sports her whole life, she also helms her own Instagram page and podcast, appropriately entitled “Hooked on Sports,” that allows athletes to tell their own stories. Her brothers’ book can also be purchased from her page.

The oldest son Hendon Hooker is a graduate senior and starting quarterback at the University of Tennessee. After a stellar prep career that included a state championship his senior season at Greensboro’s Dudley High School, he accepted a scholarship to play at Virginia Tech in 2017. He experienced some of the highs and lows on and off the field, starting 22 games and fighting through various medical issues while playing for the Hokies through the 2020 season before deciding to transfer to Tennessee.

He is now considered one of the top quarterbacks in the country after passing for over 3,000 yards with 31 touchdowns and only three interceptions for the 7-6 Volunteers a year ago. Hendon Hooker could be a serious Heisman Trophy candidate this season if he and the Vols improve those numbers and is already a top NFL prospect.

“He’s faced some tremendous challenges,” Alan said of Hendon. “He’s been able to overcome them. But Hendon’s biggest problem is he thinks he’s the best quarterback in the house. So that’s what we constantly have to debate about. We have to pull straws on who had the best stats, the best games, and who’s overcome the most. They (Hendon and Alston) think they’re faster than me. I’ve got evidence that I could run too. We’re happy. It’s a good competition.”

The youngest son Alston is a redshirt freshman quarterback at his parents and sisters’ alma mater, NC A&T. He too had an outstanding prep career at Ragsdale High School. He is looking for his first college action when the Aggies’ season starts next week vs. NC Central in Charlotte.

“It’s definitely an honor to be here (at A&T) where he (Alan) grew his legacy,” Alston said of walking the same path as his father. “Just to be able to play on the same field is incredible. But not only to be at his alma mater but to wear his number, too. That’s big shoes to fill but I think I can handle the job.

“It’s been good. It’s the middle of camp and I’m competing for the starting position, I’ll have more opportunities in the next four years if this season doesn’t go well.”

“Alston has done some things better than Hendon,” Alan said. ‘He’s fighing to get that notch (as a starter). Neither of them has yet to throw six TDs in a college game, like I did. That’s still a record here at A&T.”

The brothers have a healthy competition between them.

“Hendon pushes me everyday, even from Tennessee,” Alston said. “He and my dad are the two quarterbacks I look up to, that I’m chasing, and I’m so grateful for Hendon’s opportunity. People think that Hendon just woke up and became a great quarterback and that’s definitely not the truth. I watched some of Hendon’s games and I’ve seen him escape from the pocket, and I say, ‘we worked on that.’ I remember us being in the seventh grade working on footwork with my Dad outside. So, It’s not a surprise that Hendon’s doing great. He hasn’t even scratched the max of his potential.”

“I think it’s going fantastic,” Alan said. “We’re fortunate just to have the opportunity. I believe competition is healthy and I want them to compete for anything that want in life because nothing in life is given. You’re never given what you deserve, you get what you pursue.”

“Athletics teaches all those things that spiritual faith leads into,” Alan said. “I think athletics is a fantastic tool. I encourage every parent to have their kids participate in some kind of athletics, regardless of what it is, whether its archery or running track, football, basketball or baseball, those things that challenge kids to do something that they’ve never done before.

“And I believe that all dreamers use the same tools. They’re going after something that’s never existed. That’s what our faith has done for us. Just with the faith of a mustard seed we’ve been able to have a fantastic family, we have great conversations together, and we’re doing that under the auspices of what we believe in.”

“The ABCs of Scripture for Athletes” is available on Nile’s page for $19.99.

Hendon Hooker and his brother seek to inspire with book