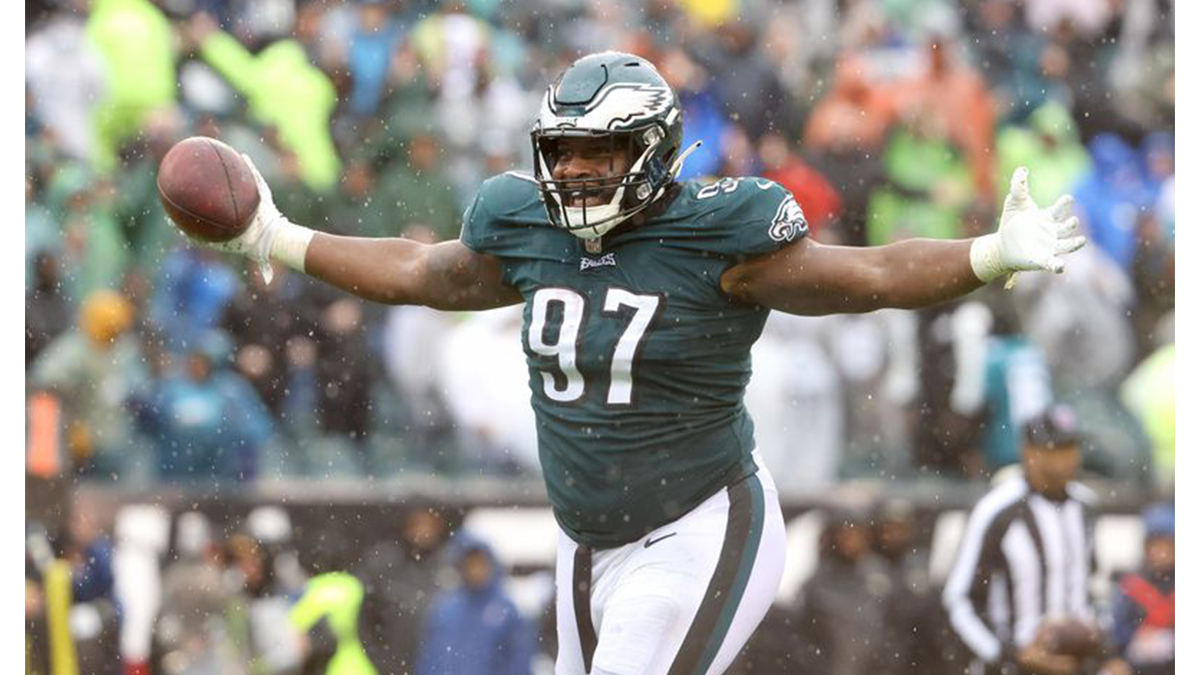 A happy Javon Hargrave (#97, SC State) runs off the field after a game-saving fumble recovery at Lincoln Financial Field, Sunday vs. Jacksonville. Hargrave is one of three defensive standouts in this week’s HBCU NFL Report.

Three defenders were the big standouts in Week Four of the HBCU NFL Report.

None was perhaps bigger that Hargrave’s.

Hargrave pounced on a late-game fumble in the Eagles 29-21 win over Jacksonville. He had just one solo tackle in the game.

The Jaguars had jumped out to a 14-0 lead after one quarter. But Eagles’ QB Jalen Hurts led the Eagles to 29-straight points before the Jags scored with 7:19 left to narrow the lead to 29-21.

Jacksonville stopped the Eagles on 4th-and-3 at the Jags 21 and took over with a chance to drive for a tie with 1:21 left. On first down however, Eagles linebacker Hasson Riddick stripped Jags QB Trevor Lawrence and Hargrave came up with the ball. The Eagles were then able to run out the clock.

It was the Eagles’ fifth turnover on the day. See it here. The win moved the Eagles to 4-0. They are the only undefeated team in the NFL.

Both Chicago’s Joe Thomas and Indy’s Grover Stewart had firsts this week.

Thomas was signed to the Bears practice squad after the preseason and saw his first live action Sunday versus the New York Giants. He was among the leaders for the Bears with five tackles as he played 62% of the defensive snaps. He was also a key contributor on special teams.

Stewart registered his first sack of the season in Sunday’s game vs. Tennessee. Stewart also contributed one other solo tackle and an assist. He played 70 percent of the defensive snaps.

Indianapolis star linebacker Shaquille Leonard (#53, South Carolina State) played in his first game of the season Sunday vs. Tennessee. The Colts announced Monday however that the three-time all pro will miss this Thursday night’s game against the Broncos due to a concussion. He suffered the injury Sunday in Indy’s loss to Tennessee.

He left Sunday’s game midway thru the second quarter when he was hit by his own teammate while trying to make a tackle on Tennessee tight end Chigoziem Okonkwo. The Titans scored on the play, and the veteran linebacker remained down on the field following the touchdown.

Leonard was walked off the field with help from the Colts training staff and blood could be seen on his face. He played just 16 defensive snaps and had two tackles in his short stint Sunday.

He missed the team’s first three games following offseason surgery on his back. The 27-year-old was absent for much of the team’s preseason training camp after undergoing an operation to address a disc issue that was causing problems in his left leg.

Ever since being selected in the second round of the 2018 draft, Leonard has been widely considered among the best at his position. He led the league in forced fumbles last year. He also tallied 122 tackles in 2021.

– #90 GROVER STEWART, DT, Indianapolis (6th season, ALBANY STATE) – In 24-17 loss to Tennessee, Stewart had three tackles, two solos with one sack. while playing 36 defensive snaps (70%) and nine snaps on special teams (39%). It was his first sack of the season.

– # 97 JAVON HARGRAVE, DT, Philadelphia (7th season, SOUTH CAROLINA STATE) – Javon started at defensive tackle for the Eagles in 29-21 win over Jacksonville. Hargrave had one solo tackle and one fumble recovery while logging 33 plays (70%) on defense. The recovery halted a late-game Jaguars’ drive.

– #72 TERRON ARMSTEAD, LT, New Orleans (9th season, ARKANSAS-PINE BLUFF) – Started for Dolphins at left tackle in 27-15 loss to Cincinnati. The Dolphins rushed for 85 yards and passed for 303 yards and one TD. Miami QBs were sacked once. Armstead was in on all 64 plays (100%) on offense.

– #53 SHAQUILLE LEONARD, LB, Indianapolis (5th season, SOUTH CAROLINA STATE) – In his first action of the season, Leonard had two tackles, one a solo, in 24-17 loss to Tennessee. Leonard played just 16 defensive snaps (30%) and went out with a concussion in the second quarter.