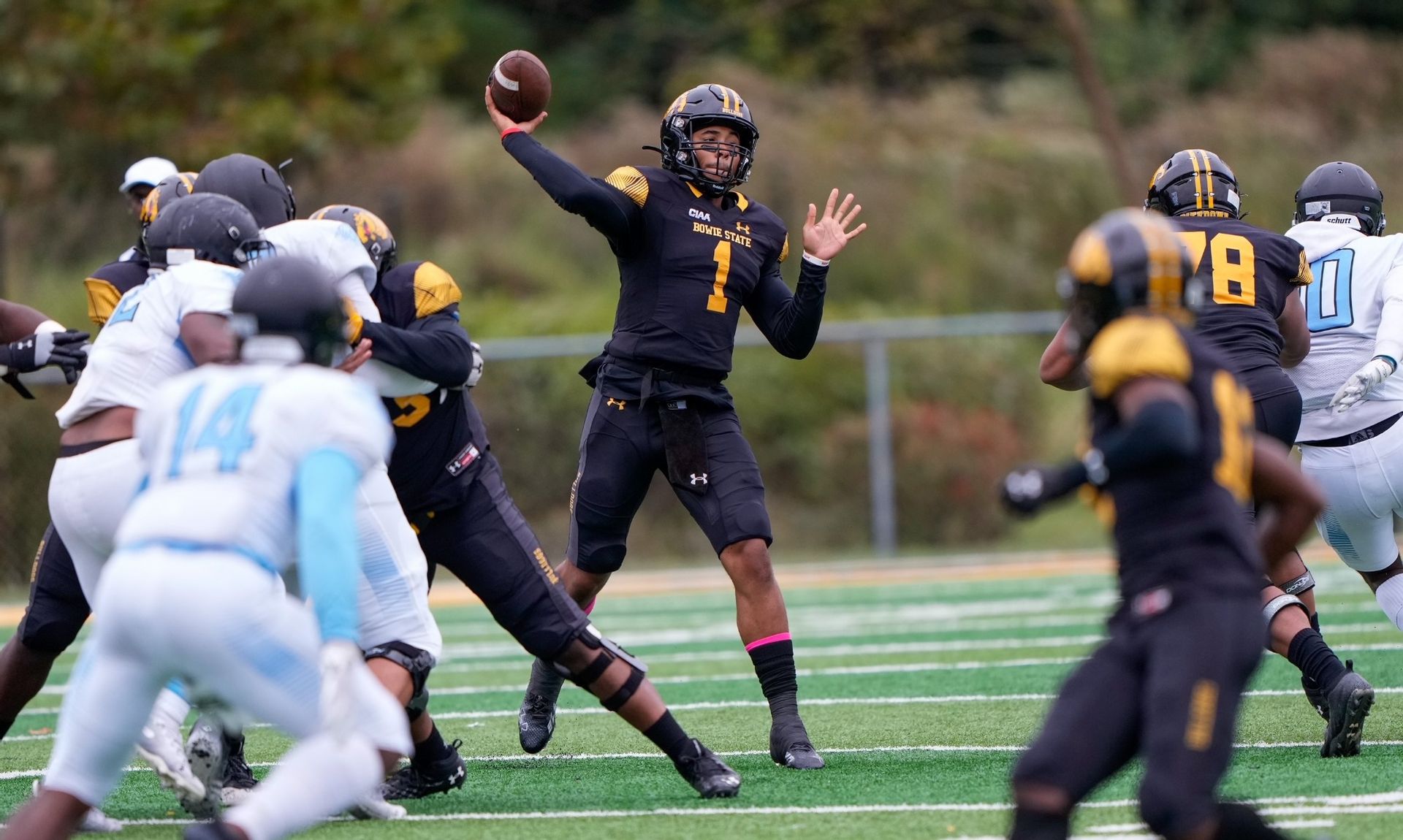 Bowie State looked like the BSU we’ve come to expect against Livingstone College for its homecoming game on Saturday.

BOWIE, Md. – Graduate senior Dion “DJ” Golatt, Jr. set a new program record for most yards in a single game with 439 on the day as the Bowie State Bulldogs football team upended the Blue Bears of Livingstone College, 53-7 for its annual Homecoming game Saturday afternoon at Bulldog Stadium.

Golatt, Jr. passed former Bowie State standout Amir Hall who previously held the record for most yards in a game at 433 yards.

The Largo, Md., native completed 32-of-40 passes, four TDs and two interceptions on the afternoon while redshirt sophomore Sam Doku(Silver Springs, MD) rushed for 77-yards on 13 carries and a touchdown and redshirt junior Kwincy Hall (Washington, D.C.) caught 10 passes for 120-yards and a TD.

The Bulldogs combined for 666 total yards – the most this season and fourth all-time including 465 through the air (now second all-time in program history) and 201 on the ground. Six different Bulldogs scored a touchdown in today’s game.

Bowie State took an early 6-0 lead in the opening quarter on a 15-play 82-yard drive capped by a two-yard scamper for junior Elisha McDonald(Greenbelt, MD). In the second, redshirt senior Morgan Scroggins (Baltimore, MD) caught a 32-yard pass from Golatt, Jr. to give the Bulldogs a 12-0 lead at the 14:51 mark of the second quarter.

Bowie State never took its feet off the gas in the second half. The Bulldogs outscored the Blue Bears 15-7 including six-yard rushing TD for Doku, another BSU safety and a nine-yard rushing TD for backup quarterback and junior Larry Williams (Baltimore, MD) in the third quarter. LC’s lone touchdown came from an 83-yard interception for Kevin Larkins.

In the fourth quarter, the Bulldogs added one more score when redshirt sophomore Justin Zavala (Bowie, MD) hit a 29-yard field goal – his longest of the year that stamped the homecoming victory.

Bowie State improves to 3-2 overall and 2-1 in the CIAA while Livingstone falls to 1-4 overall and 0-3 in league action. The Bulldogs return to action Saturday, Oct. 8 with a road trip to Ettrick, Va., to take on the Trojans of Virginia State. Game time set for 4 p.m. at Rogers Stadium.