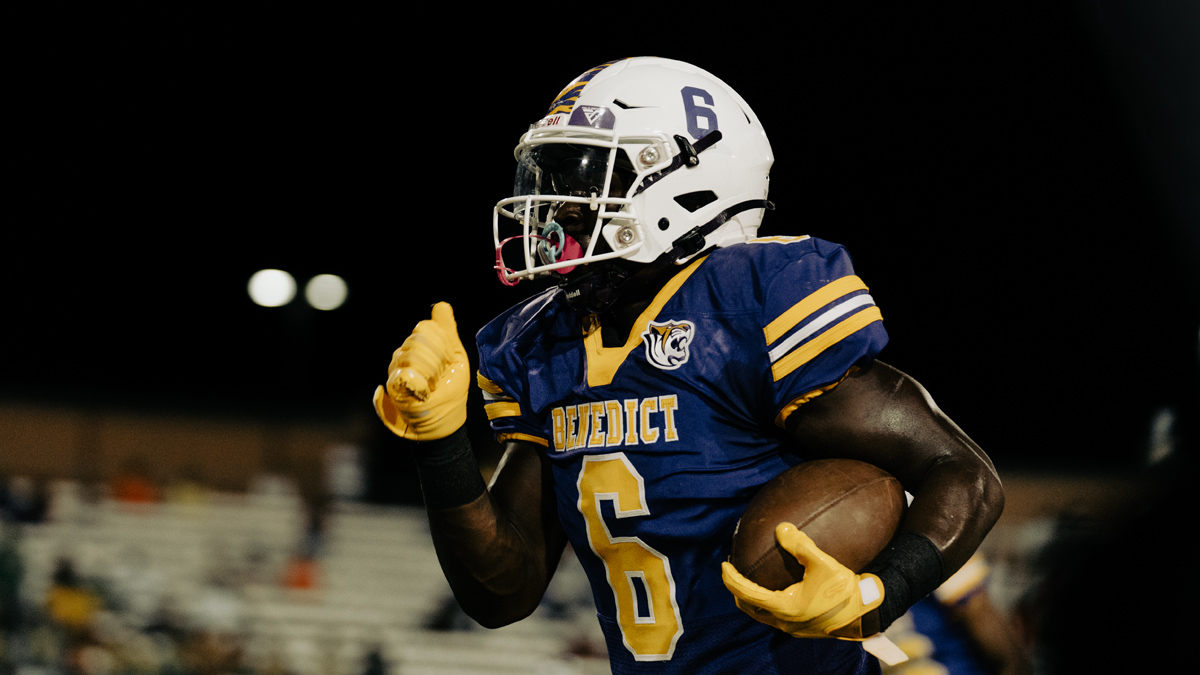 After starting his career at the Division I level, running back Zaire Scotland is quickly making an impact at Benedict College.

Benedict College running back Zaire Scotland had his coming out party last Thursday on national television.

The redshirt freshman carried the ball a career-high 22 times for a career-best 112 yards and a score as Benedict knocked off Savannah State to improve to 3-0. He rushed for two touchdowns, though the first of them was called back due to to holding. His performance helped the team break away in the second half. And like any good back, he gave credit where credit was due.

“We had to just calm down and realize that they were giving us the small stuff — which is what we want — what coach preaches about all of the time,” Scotland said after the game. “Taking the small stuff. And so once we did in the second half, we started to run the ball and we realized that they couldn’t stop the run. So we kept putting it and we put on those big boys back and they carried us to victory.

So it was a good team win and most definitely a good win for the O-Line.”

Scotland was named SIAC Offensive Player of The Week for his performance.

It was the kind of performance that showed why the Walhalla, S.C. native started his career at the FCS level at Kennesaw State. He was a three-time all-region performer and 2020 1-AAAA Player of the Year in the far western reaches of the state. He saw action in three games last year, but didn’t run the ball, and decided to make a change.

Enter Benedict College. Scotland said he has a cousin that attends the school and once he had a conversation with head coach Chennis Berry, he was pretty much sold.

“Everything he said is what I wanted to hear and what I want to play for,” Scotland said. “He told me that he’s building men and how he’s working on building this program up to being a D1 level (program).”

Berry called his new back “the real deal.”

“You’re talking about a talented individual right here in the state of South Carolina. He is fast, he’s quick. He’s elusive and strong and he’s 100 percent bought in. And he’s a smart football player. He’s still learning. He’s still growing. I think he’s got a bright, bright, bright future.”

Scotland said Berry and his staff have made it easy to buy into what the program is doing and where it is going.

“He’s done a great job of just making this place feel like it’s home and it’s just putting us in a position to succeed,” he said. ” And so you can’t ask anything more, really, when it comes to that. All those factors came into me choosing this school. And right now, I’m happy with my decision.”

Benedict heads into Saturday’s matchup looking to stay perfect as it hosts Kentucky State. Zaire Scotland is one of many transfers Berry and staff have brought in, and he says the main thing for the team is to continue to grow together.

“Talent is not a problem here at Benedict. It’s just chemistry and everybody buying in and just being disciplined,” Scotland said. “If we can all get to that point — I don’t think nobody in SIAC, or really Division II — will stop us because of the talent we have. So it just takes discipline and hard work and we’re starting to get to that level right now. And you can see it in our practices and meetings. Guys are being where they’re supposed to be, on time and stuff and really starting to get bought in. I think if we can keep the trend going in that direction, we’ll be just okay.”