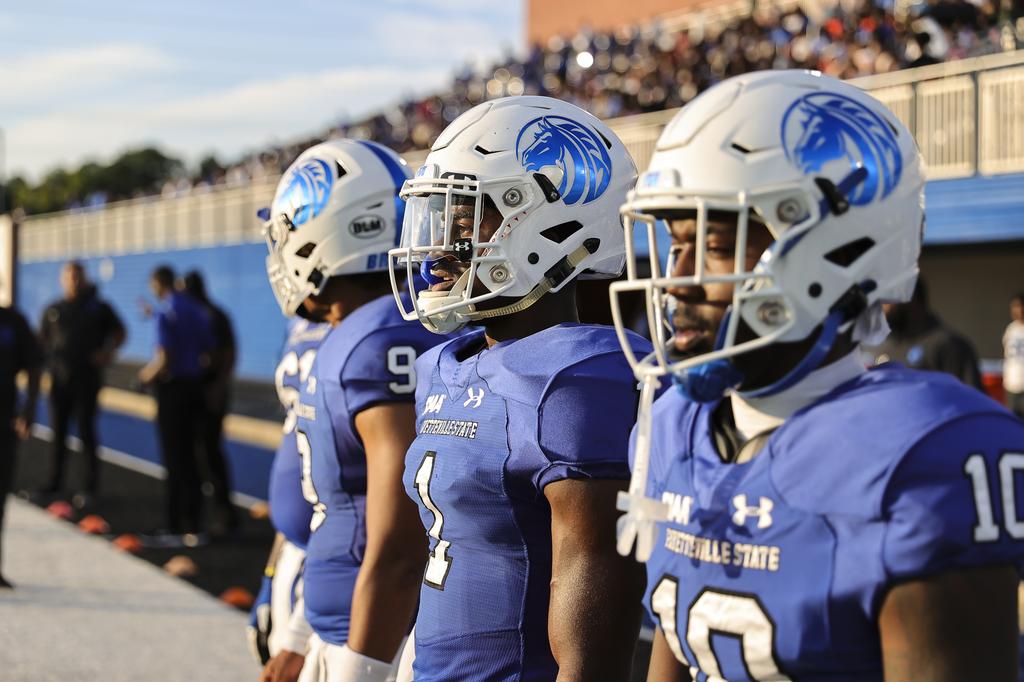 CIAA Football: What to watch for in Week Four

CIAA Football is in full swing as cross-divisional matchups continue, including a big one between Fayetteville State and Virginia Union.

The first weekend of CIAA football hit us with some surprises.

Shaw delivered Bowie State’s first conference loss since 2017. That loss dropped Bowie State out of the national polls, and has BSU sitting with a losing record early in the season.  That position is very uncharacteristic for the Bulldogs.  Virginia Union steamrolled Livingstone, and took BSU’s position as the conference’s lone ranked team in both major Division II polls.  Chowan and Johnson C. Smith’s game made for excellent theater, with Chowan winning that game late in the waning seconds.  Elizabeth City State defeated Winston-Salem State for the second straight year on a second-half surge, while Virginia State made it look easy against Saint Augustine’s. Lincoln’s defense slowed down Fayetteville State, but its offense couldn’t find the end zone enough to score an upset victory. Week our is likely to produce even more drama – the key is to find which game will have it.

Here are five things to look for in CIAA football this week:

Virginia Union (3-0, #20 d2football.com, #22 AFCA, 1 HBCU Gameday) leads the country in scoring offense (54 points a game). Running back Jada Byers has been pacing the offense, rushing for 616 yards in three games.  That total is tops in the country.  He also leads the country in total offense per game, and it’s not close. VUU lines up against Fayetteville State this week, who actually gave up 221 rushing yards to Lincoln last week, and is surrendering 151 yards on average.  Can Byers keep performing like he has?  One has to imagine that he is on Harlon Hill Trophy watch (the D2 equivalent of the Heisman) this year.

Offenses in disarray – FSU (2-1) and WSSU (0-3) have veteran quarterbacks on the roster, but continue to struggle in the pass game.  FSU surprisingly averages 105 yards a game through the air, though that’s marginally better than WSSU’s 84 yard average.  In FSU’s case, it seems like maybe the instability at offensive coordinator (new one every year since 2017) is finally catching up with them, as FSU is only averaging 12 points a game.  WSSU’s offensive problems seem deeper, with a hyper focus on the run game that teams have started focusing on.  WSSU and FSU have now played three quarterbacks this season. The main difference between these schools have been the defenses, as WSSU is very porous when the opponent gets to the red zone. FSU’s defense has been strong enough to keep them in games.  Both schools need to figure it out on offense, especially given this week’s opponents. FSU is up against red-hot VUU, while WSSU is looking to cleanse its mind at a surging Chowan after the Hawks dismantled them 73-7 last year.

The most exciting CIAA football game this week might be Lincoln (1-2) and JCSU (0-2).  Both teams have standouts at wide receiver. Lincoln’s Dah’mear Triplett has scored a touchdown in his last two games. JCSU’s tandem of Brevin Caldwell (381 yards, six touchdowns, leading the conference in both categories) and Reggie Bryant (21 receptions, 205 yards) have really revived the Golden Bulls’ offense this year.  The question are the defenses: Lincoln’s strength is its secondary, and it will be interesting to see if they can slow down JCSU’s weapons. Meanwhile, JCSU’s defense has been rather suspect in the air and on the ground, and that issue may help ease some of Lincoln’s scoring issues.  If so, this game might be typical JCSU game – high scoring.

If there was the perfect team to bounce back against, it has to be St. Augustine’s (0-3).  The Falcons’ defensive struggles continue as demonstrated by Virginia State (2-1) putting up 42 points on them.  SAU is worst in the country in scoring defense (62 points a game) and one of the worst in yards given up (545 yards). Bowie State (1-2), this weekend’s opponent, is looking to bounce back after an ugly loss to Shaw last week. BSU can rack up the yards, but keeps getting in their own way with ill-timed turnovers and stalled drives. Might this be the game to see if they can cure the offensive mistakes?

The winner of ECSU (1-2) and Shaw (1-2) will be on a two game winning streak.  Both schools enter this game after emotional fourth-quarter comebacks.  They also seem miles away on productivity, especially with Shaw’s offensive weaponry.  Shaw didn’t get much out of its vaunted run game last week (95 yards), so it will be curious to see if they are able to jump start the three-headed monster they have in the backfield in this game.  ECSU has a decision on its hands: do they start freshman Chase Williams, who has been unsteady to date, or backup quarterback Tesean Jones, who was efficient in Williams’ relief last week?

CIAA Football: What to watch for in Week Four