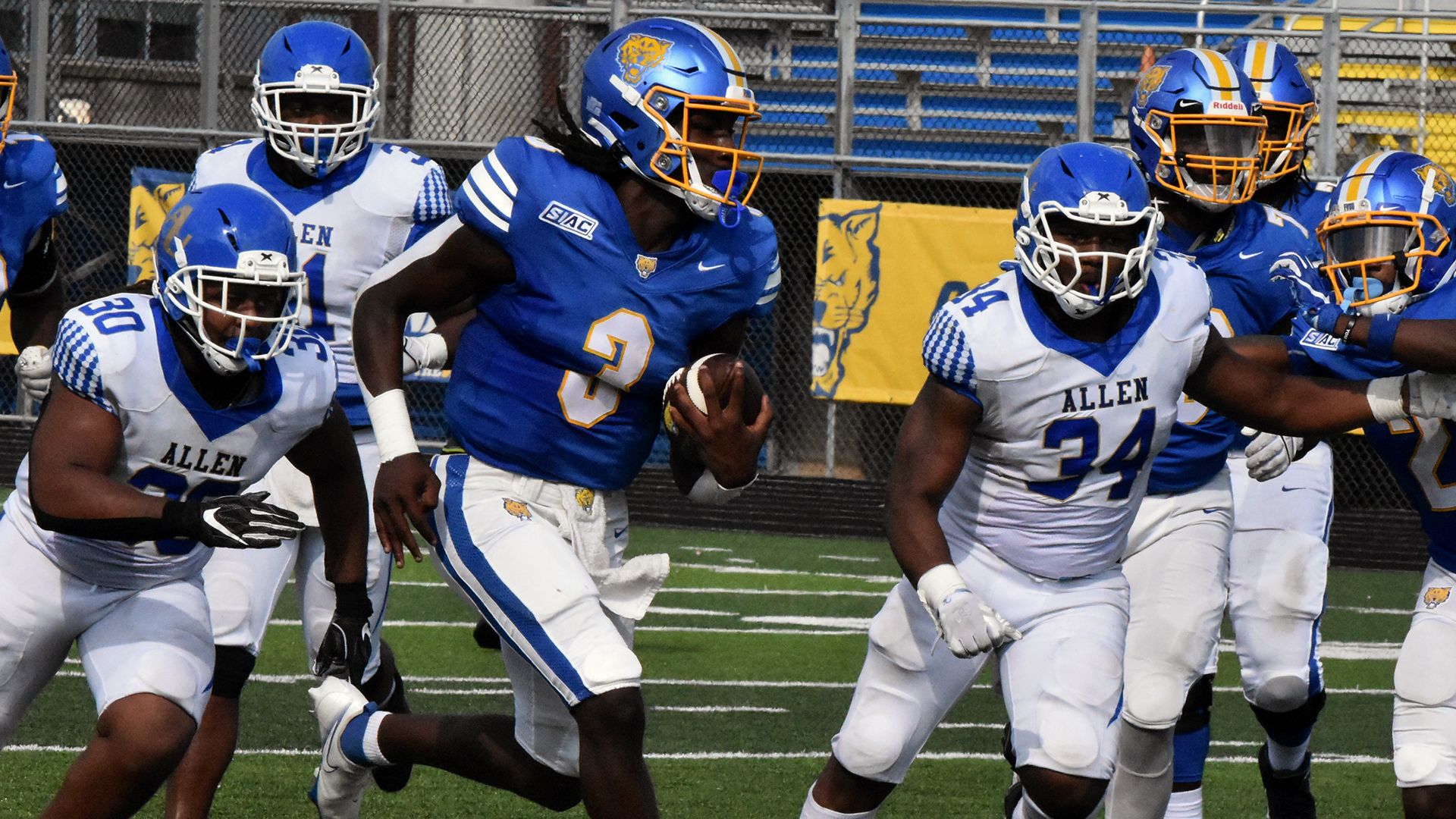 Fort Valley State was down early against Allen, but it rallied behind the arm of its freshman quarterback to improve to 3-0 on the season.

FORT VALLEY, Ga. – After being challenged all afternoon, Fort Valley State proved resilient down the stretch. Kelvin Durham’s quarterback scramble for a 10-yard touchdown gave Fort Valley State its first lead in over 36 minutes and its defense held strong late to complete the 29-27 comeback football victory over Allen University.

Following the Fort Valley State (3-0/1-0 Southern Intercollegiate Athletic Conference East) score four plays into the second half, Allen (0-2/0-1 SIAC East) answered with a nine-play drive of its own to extend its lead, 27-17. The Wildcats showed the final 17 minutes would be theirs.

Durham came up with the first home answer to the Yellow Jackets where he found wideout Fralon Warren cutting across the middle and raced down the right side 49 yards for the score and a 27-23 margin with 2:04 in the third. The first FVSU drive to retake the lead stalled at the Allen 35-yardline, but the home defense held fast for a three-and-out series.

On the ninth place of the ensuing possession, Durham pulled down the ball and ran around the left side into the clear to the endzone for the 10-yard go-ahead touchdown with 3:58 remaining. The FVSU defense had it toughest day, but again held when it was needed the most with a 3-yard rush, a 6-yard sack, and forced a scrambling incompletion before Tim Alderman recorded his sixth quarterback hurry and Christian Maddox and Jamal Janvier combined to breakup the 4th-and-18 pass to seal the Wildcats victory.

With the win, head coach Shawn Gibbs not only improved to 3-0 as a collegiate head coach, but he has the Wildcats team at 3-0 for the first time since 2004.

For the second week in a row, Durham continues his rapid quarterback growth. The redshirt freshman led Fort Valley State to its highest output in three weeks of 430 yards of total offense. Durham completed 20-of-32 attempts for 334 yards and three touchdowns while he rushed for another 28 yards on eight carries with none bigger than his final 10-yard scoring run.

Durham’s favorite two targets of Corintheus Edmonds and Warren combined for 13 catches for 289 yards and three scores. Edmonds pulled in seven balls for 143 yards and a 51-yard touchdown to start the third-quarter points, while Warren had six receptions for 146 yards with scores grabs of 28 yards and 49 yards, which was the home team’s final score of the third frame.

For the defense, Jaylen Brown and Lataj Wright paced the Wildcats with eight stops each. It was the combined sack by Adeon Farmer and Caleb Thomas, who had seven combined tackles, on the second play of Allen’s first possession which was key. Alderman posted only three stops but was in the Allen backfield all afternoon with a jumping pass breakup and six quarterback hurries.

Allen quarterback David Wright completed 26 of 37 passes for 295 yards and a pair of scores. Robert Nicholson led the visitors’ defense with eight tackles, a sack and one hurry.

FVSU will now trek to the Mountain State next weekend when it plays at Bluefield State (W.Va.) on Saturday, September 24, in a 1 p.m. kick-off.