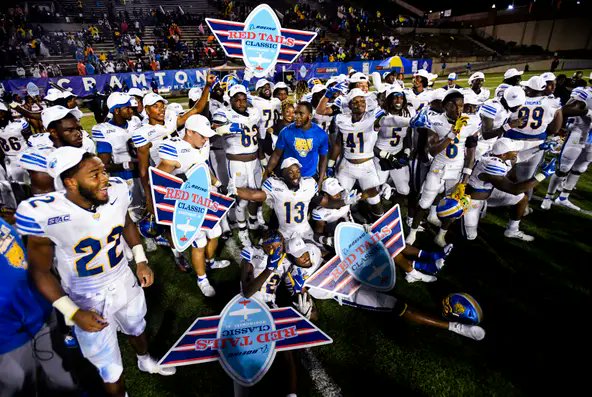 Fort Valley State rose to victory on the legs of running back Emmanuel Wilson as it won the Red Tails Classic on Sunday.

MONTGOMERY, Ala. – Backed up after a penalty on a punt return, Fort Valley State turned to the man of the night on the first play and the rest was history. Emanuel Wilson took the hand-off and ran up the gut of the Tuskegee defense for an 87-yard touchdown and sealed the Fort Valley State victory with 11 minutes left in the game, 21-6, at the 2nd Annual Red Tails Classic.

On what turned out to a beautiful night at the Cramton Bowl, the Wildcats’ Tyler Moore picked off the Golden Tigers’ first possession. FVSU (1-0) quarterback Kelvin Durhamrushed in from 10 yards less than three minutes later in his first career drive and the team in Blue & Gold never trailed.

FVSU claimed its second Red Tails Classic over Tuskegee (0-1) in as many years. More importantly, the Wildcats win gave new head coach Shawn Gibbs his first victory leading the team of his career.

Already at 154 yards in three quarters, the redshirt junior Wilson made his attempt to rush into FVSU single-game history. He punctuated the start of his second year at The Valley with his rumble up the middle as he watched the big Jumbotron scoreboard as he ran to make sure he wouldn’t be caught on his 87-yard scoring run. Along with the long scoring run, the running back plunged in from three yards 9:33 left in the second quarter for his other touchdown. Other than his 262 yards, five short of a school single-game record, Wilson pulled in two passes for 12 yards for 274 total yards of offense.

The Wildcats’ defensive unit was solid as well. The group allowed Tuskegee only 209 yards on 61 plays with three sacks and the Moore interception. Moore also added five tackles with two for loss on the night. Linebackers Jaylen Brown and Kentrell Lawsoncombined for 15 stops to lead the FVSU defense. Tim Alderman, who had two, and Bryce McGuireaccounted for the three sacks.

Tuskegee scored its only points on a 10-yard touchdown pass with 6:33 to go in the second frame. FVSU blocked the extra point attempt and led 14-6 at halftime.

In the victorious locker room after the game, Coach Gibbs announced the location change for next week’s game. After previously to play Sunday in Chattanooga, FVSU will now host Kentucky State next Saturday, Sept. 10, at Wildcat Stadium with a 1 p.m. kick-off.