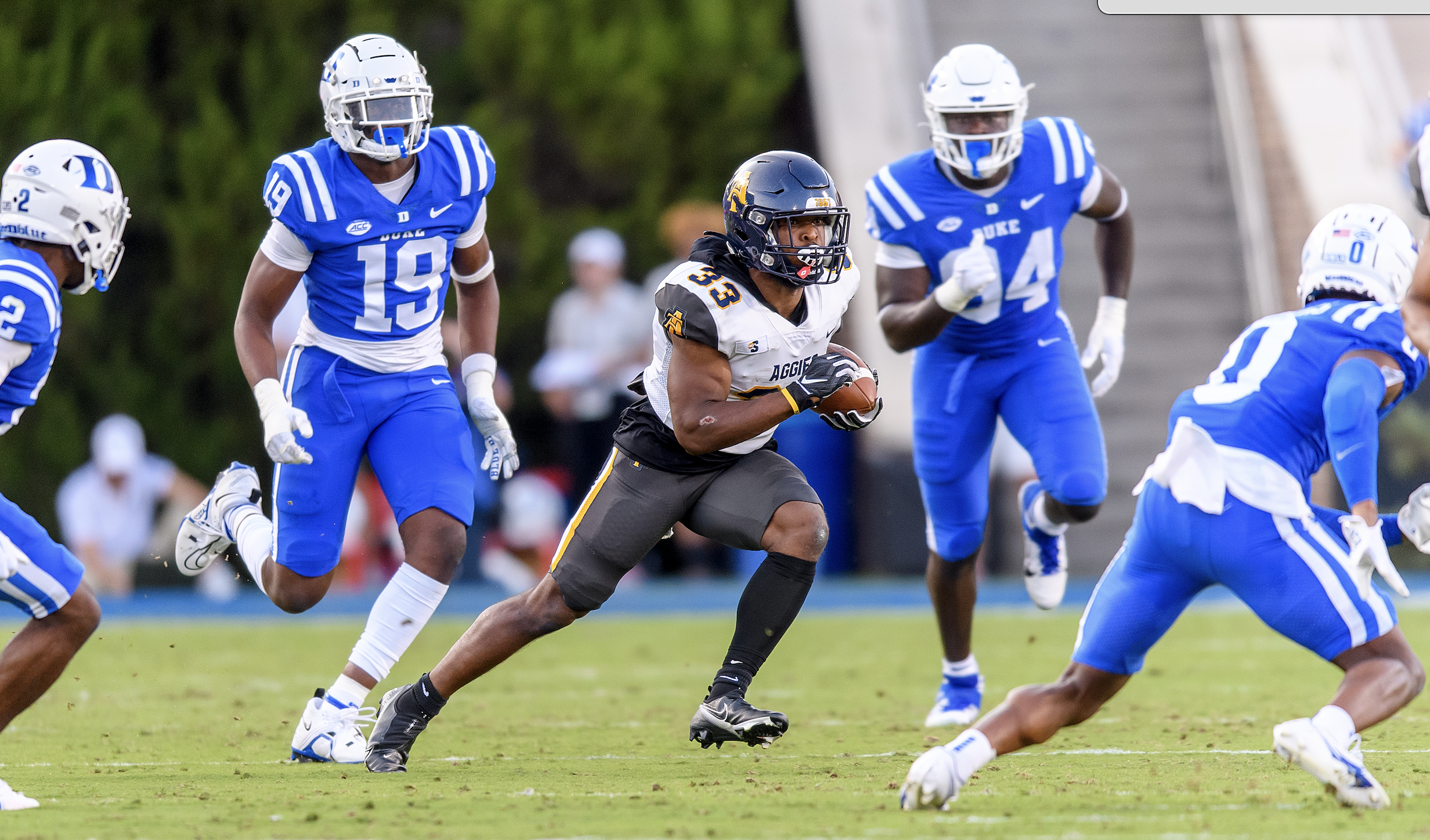 NC A&T sophomore running back Bhayshul Tuten (#33) was one of the bright spots for the Aggies in the loss Saturday to Duke. Tuten ran for 133 yards on just 13 darries including long runs of 55 and 48 yards. (Photo by Kevin Dorsey)

It may be hard to find some HBCU connections between NC A&T and Duke, but there are some.

North Dakota State returned the opening kickoff a week ago 48 yards to the A&T 48. They scored four plays later.

The Aggies were down 21-0 in the first quarter at Duke after a strip sack by Duke junior defensive tackle Aeneas Peebles. The fumble by QB Jalen Fowler was returned 35 yards for a score. They trailed by 21 before eight minutes had gone off the clock.

They went into the break down 28-6 after two field goals by placekicker Andrew Brown. More on Peebles later.

The game was billed as a sellout as Duke indicated that all 40,000-plus tickets had been sold. Well, the tickets may have been distributed but the recipients didn’t show up. Not even the ones with tickets NC A&T head coach Sam Washington said were sold for $5.

Many fans likely didn’t make the trip to Durham after reports surfaced of the sellout.

The box score indicated attendance at 32,802. It looked to this reporter that there were far less in the stands.

NC A&T is running back U

One bright spot for the Aggies in their 49-20 loss to Duke had to be the play of their running backs.

The Aggies, who have produced a slew of outstanding backs including Tarik Cohen, Maurice Hicks, Mike Mayhew, James White, George Ragsdale, Michael Basnight, Mo Smith, among others, have another potentially outstanding trio.

Sophomore Bhayshul Tuten ran for 133 yards on 13 carries (10.0 yards per carry) with long runs of 48 and 55 yards. Tuten showed quickness, speed and elusiveness between and outside the tackles as he put up his second straight 100-yard effort.

Redshirt freshman Wesley Graves came through with 43 yards on eight carries, running hard inside. Graves, in his most extensive action so far, also showed he could catch the ball out of backfield, grabbing two passes for 33 yards (16.5 yards per catch).

Another redshirt freshman, Charlie Dixon, a 6-2, 235-pounder, scored the only Aggie TD on the ground. He scored on an 8-yard run in the fourth quarter and finished with 20 yards on two carries.

“We did improve,” said NC A&T head coach Sam Washington. “We did some things better in the second half than we did in the first half. But we still have the problem with the turnovers. That plagued us as both resulted in points.

“You cannot give opposing teams those kind of opportunities.That’s one thing that’s disappointing. But I was pleased with the (lack of) penalties. We had only three for 15 yards. That’s a drastic improvement.

“So, they are getting the message. I do see some growth. It’s about improving in each game and getting better.”

Washington was likely most disappointed in his defense that surrendered 420 total yards.

NC A&T got its first good look at a couple of quarterbacks.

Redshirt freshman Eli Brickhandler played nearly half the game and showed great poise in his first action. He completed five of eight passes for 48 yards and one TD. He also rushed for 22 yards on ten carries. Brickhandler did not have a turnover.

Most importantly, he showed a command of the offense. Both Fowler and Brickhandler threw the ball well. They placed several balls on Aggie receivers’ fingertips that they couldn’t haul in.

Duke defensive tackle Aeneas Peebles, a junior from Raleigh, forced another Fowler fumble in the third quarter. The play was reviewed but stood.

Peebles is the son of William and Gia Peebles and grandson of former NC Central and San Diego Chargers offensive tackle Doug Wilkerson. Wilkerson, a NCCU and Black College Football Hall of Famer, played at NCCU from 1965-69 and was the first Eagles player to be drafted in the first round of the NFL Draft.

At NCCU, Wilkerson was a Pittsburgh Courier all-American as an offensive and defensive lineman. He reportedly ran the 100-yard dash in 9.6 seconds. And at 6-4, 240 pounds, he was reportedly the second fastest player on the team.

Wilkerson in the pros

Wilkerson was drafted by the Houston Oilers with the 14th overall pick of the 1970 draft – the first offensive lineman to go off the boards that year. After his first season, he was traded to San Diego for Willie Frazier, a tight end from Arkansas-Pine Bluff.

Wilkerson played 14 seasons with the Chargers earning three Pro Bowl designations. He was first team all-Pro in 1980. He is in the LA Chargers Hall of Fame and a member of the Chargers 40th and 50th Anniversary Teams.

Wilkerson passed in February 2021. His grandson, Aeneas, had a career-high six tackles in last year’s 41-17 win over NC A&T.

(Most of this info on Peebles was provided in the press box by Elvert Dorsey, an NCCU graduate and father of NC A&T photographer Kevin Dorsey, an Aggie).

The Aggies have their home opener Saturday (Sept. 24) when they entertain 2021 MEAC and Celebration Bowl champ South Carolina State.