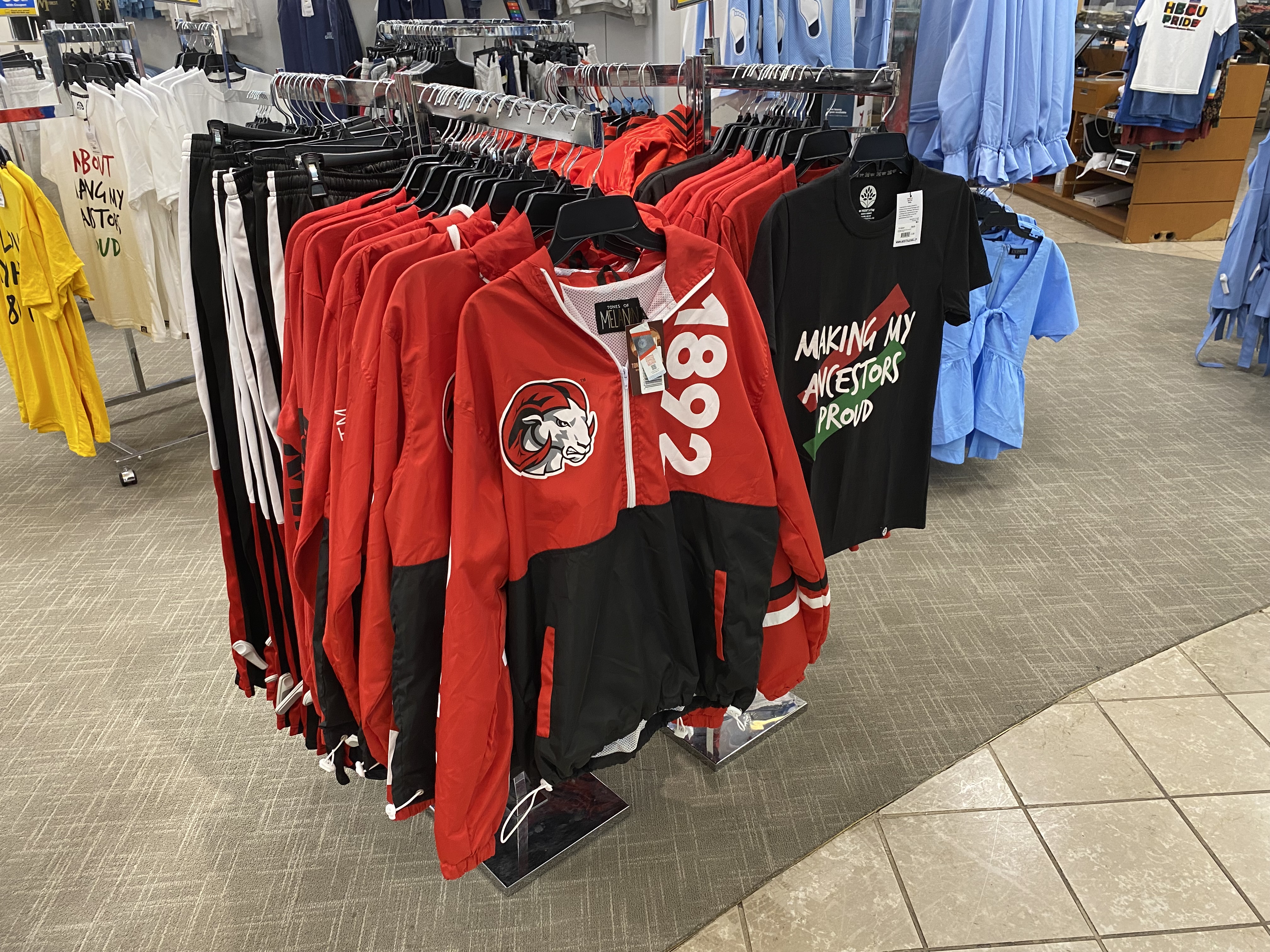 WINSTON-SALEM, N.C. — In a section of the lower level of the Belk department store in Winston-Salem, North Carolina, is a display of college-oriented apparel. But in addition to the traditional clothing. HBCU merchandise is taking a prominent place as well.

There are the familIar items from the University of North Carolina, NC State, Duke and Wake Forest. But alongside them in this store are items representing Winston-Salem State and North Carolina A&T. There was a time when the clothing from those schools could only be found in their respective book stores.

Now, HBCU paraphernalia can be found not only on campus, but in mainstream department stores, sporting goods stores and online. Also emerging are entrepreneurs who are riding the wave of popularity and striking out with their own lines of clothing geared to their alma maters or other HBCUs. It’s a trend dating back at least a decade and which is showing indications of growing stronger thanks in part to a heightened profile for HBCU sports.

Belk launched its “Culture Shop” in 2021 to coincide with Black History Month. It was created by the chain’s Black business resource group.

“It’s important now, more than ever, to step up and be intentional about inclusion,” said Lisa Harper, Belk CEO, in a news release. “The Culture Shop is an opportunity to better reflect the unique customers and communities we serve.”

Some of the items in the Winston-Salem store are from the Tones of Melanin collection developed by Ashley Jones, who was motivated by a lack of school-themed apparel at her school, Norfolk State. She started the line while she was an undergraduate, WAVY reported.

“It’s not just going to the school, you have the band, it is so many things that go into the HBCU culture,” Jones says. “It’s just like a family reunion. There (are) so many different parts to it than just going to school. It’s a network. It’s a whole experience. We really want to portray that to the world!”

In addition to Belk, Tones of Melanin merchandise can be found at Dick’s Sporting Goods. online at Fanatics.com and 18 HBCU bookstores, according to Jones, who wasn’t available for additional comment.

Observers of HBCUs cite a number of factors in the emerging profile of HBCUs.

Marybeth Gasman, who has been studying HBCUs for more than 20 years and is Samuel DeWitt Proctor Endowed Chair in Education and a Distinguished Professor at Rutgers University, says the wave of apparel is driven by multiple influences.

“I think some of this has to do with pride because there’s a lot of that,” Gasman says. “You also have to remember just how prominent fashion has been on many HBCU campuses.”

Both Mobley and Gasman point to one person as driving force behind the renewed pride, the same person credited with injecting new life into HBCU football..

“I think with (Jackson State coach) Deion Sanders and just the big push for getting more top athletes to go to HBCUs, and that has made a big difference,” Gasman says.

Mobley throws another name into the heightened expressions of pride.

“Kamala (Vice President Harris) really stood firm in really wanting to call upon and rally the Black Greek community and the HBCU community,” he said, referring to the Howard alum.

REPRESENTING IN THE WEIGHT ROOM

“I knew the bigger brands that manufactured fitness equipment didn’t have an affinity for the gym enthusiast that attended an HBCU,” Conaway says in the article. He also says he sees the HBCU gear as a “conversation starter in the gym,” allowing HBCU alumni to recognize each other and serving as a sort of billboard.

FANS GET DECKED OUT FOR RIVALRY

At the recent Duke’s Mayo Classic in Charlotte, North Carolina, fans of both North Carolina A&T and NC Central were decked out in school colors. It left Bank of America Stadium awash in competing waves of blue and gold, and maroon and silver.

Gwen and Handy Yates of Greensboro were appropriately attired in their Aggie gear, a tradition he says goes back around 40 years. There were no online purchases in his heyday, so he went where he could to augment his wardrobe.

“Back in our time, there’s always vendors at each event who would sell those shirts for five dollars,” Handy Yates says. “At the end of the game, they would just about give them to you because that’s the way it was back then.”

Today, Yates says he can go to local stores to find his Aggie shirts, but he prefers the vendors he’s dealt with through the years. Asked how many shirts he had, he responded, “I’ve got a closet full of stuff.” His wife confirmed that, to which he replied, “I don’t know what she’s talking about. Look at those shoes.”

Gwen Yates was wearing sneakers adorned in the blue and gold of their favorite school.

“I was looking for sneakers and I saw these and I thought those would be nice,” she said. “And they’re perfect.”

Several sections over, Derrick Coleman and Shakira Warren took their seats, the epitome of a family feud. With their wedding on the horizon, Coleman came to the game sporting his blue Aggie t-shirt and Warren was in her maroon Eagle t-shirt.

“A lot of trash talking,” Warren says. “And we’re engaged, so it’s even crazier”

Warren says she goes back to the NC Central campus to get her apparel because she enjoys returning to the atmosphere in Durham. Coleman says he either heads back to A&T or to a nearby Walmart for his gear. They do not purchase for each other.

And what about the wedding? Will it be a blue and gold theme for the groomsmen and the bridesmaids, or maroon and silver?

“We’re going to have a little house divided in there.”