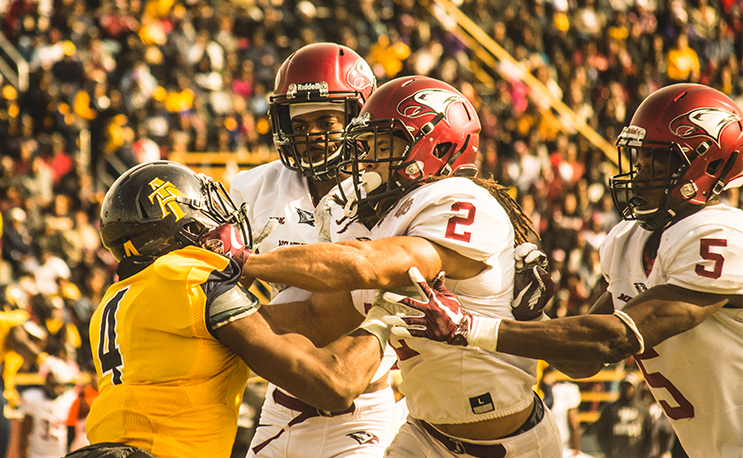 The rivalry between NC Central and North Carolina A&T will have relatives squaring off for the 100th anniversary game in the Duke’s Mayo Classic.

WINSTON-SALEM, N.C. — There likely won’t be a Thanksgiving dinner after the game between NC Central and North Carolina A&T at the Duke’s Mayo Classic on Saturday, even if the fans are hoping one team beats the stuffing out of the other.

And while those fans may be on opposite sides, they may be under the same roof or on the same family tree.

The Aggies and Eagles mark the 100th anniversary of their first game with a renewal at the home of the NFL’s Carolina Panthers. For years, the game was a highlight of the holiday, but in recent years it has meandered around the calendar, leading to their season-opening showdown in Charlotte. And the game surely had involved some lively family discussions.

“One of the things that I enjoy most about this game is the fact that there’s so much interconnectedness between the two institutions and the families,” says North Carolina A&T Athletic Director Earl Hilton III. “You will almost never meet someone who’s a graduate of Central who doesn’t have a cousin or a brother, an aunt who went to A&T and vice versa. And so, this gets personal in a hurry.”

NC Central Athletic Director Skip Perkins can relate to the aspect of relative against relative in the Classic.

“I have three or four cousins that, when I was in grad school, were right down the road at A&T and I was like, ‘No, you guys coming through. I’m not going down to Greensboro,” Perkins says. “This is just one of those really, really, really cool experiences. And it’s so funny. There’s households. I have classmates that have their their kids went to A&T, and I’m like, ‘How can you pay that tuition?’ So this is this is about as good as it gets.”

Some historians note that the first Aggie Eagle game was played on Saturday, Nov. 22, 1924, and ended in a 13-13 tie. Research found in the Bluford Library Archives shows the two school first met on Thursday, Nov. 23, 1922, and A&T College beat the Durham State Normal School for Negroes 26-0 on the grounds of the A&T campus, where Holland Bowl and Williams Cafeteria stand today.

A book compiling the history of the series is in the works and scheduled for publication next year. “NCA&T vs. NCCU: More Than A Game” is a collaboration between Charles Johnson, assistant professor and director of the Public History Program at NC Central, and Arwin D. Smallwood, professor and chair of the Department of History and Political Science at A&T.

Johnson and Smallwood also collaborated on a photo exhibit that was on display prior to the game. There are also exhibits featuring the Classic at museums in both home cities.

Part of that history involves Spencer Gwynn, the play-by-play voice of A&T football for 51 years. He played for the Aggies and was working as a teacher in Greensboro when a local radio station announced it would broadcast the school’s games. Gwynn knew that job was for him, although the station manager felt differently.

“My disc jockeys are gonna do the game,” Gwynn recalls the manager saying. “So I said, ‘Well, I played football. Is there some way that I can get involved in the game?'”

He says there are too many highlights to single out during his own career, but one certainly stands out. It was a Classic game at Wallace Wade Stadium on the campus of Duke University when one fan took the idea of driving down the field quite literally.

“In the second half, the game was in progress. And then all of a sudden, this guy drove his car out to the 50-yard-line while the players are on the field,” Gwynn says. “Parked his car on the 50-yard line, got out and walked away.”

Kyle Serba started at NC Central 28 years ago as sports information director and was immersed in the Classic within days of his being on the job. The 2002 Aggie-Eagle Classic at Carter-Finley Stadium, home of North Carolina State football, ranks high on Serba’s list of memories, and not just because the Eagles rallied to win in overtime.

NC Central trailed 27-0 at halftime, but Serba says the Eagles mounted a comeback that produced a memorable moment between plays.

Fuller returns to the huddle, Serba says, and drives the Eagles down the field to force overtime. In the overtime, NC Central holds North Carolina A&T to a field goal before Donny Pippin dives into the end zone to cap the comeback and give the Eagles the victory.

What also sticks in Serba’s memory is the fellowship outside the stadium before the game, played in a large stadium as opposed to O’Kelly-Riddick Stadium, where the Eagles can fit around 10,000 people in a cozy environment. It was also far different from his experience at his previous job at the University of Albany in upstate New York.

“It looked like a State Fair out there,” Serba says of the parking lot. “And then, to know that it was a rivalry, really the collegiality between Eagles and Aggies. It was pretty festive and family oriented, which one wouldn’t expect to see.

“I’m sure (Duke and North Carolina) don’t really mix like that on game days, whereas when it’s Eagles and Aggies, there’s so many relationships and families that are intertwined with both that it is really is a family atmosphere,” he says.

Gwynn recalls when NC Central and A&T met as members of the Central Intercollegiate Athletic Association with championship implications on the line. It’s quite different now, and while he misses that dynamic, he knows there’s one element to the game that doesn’t change.

“But the difference this year is the fact that the game doesn’t have the same significance as when both teams are in the same conference. It’s still a rivalry game,” Gwynn says. “And on numerous years, one of the other team was playing for the championship. But this year is the pride and of course between these two teams, the pride is still the pride.”