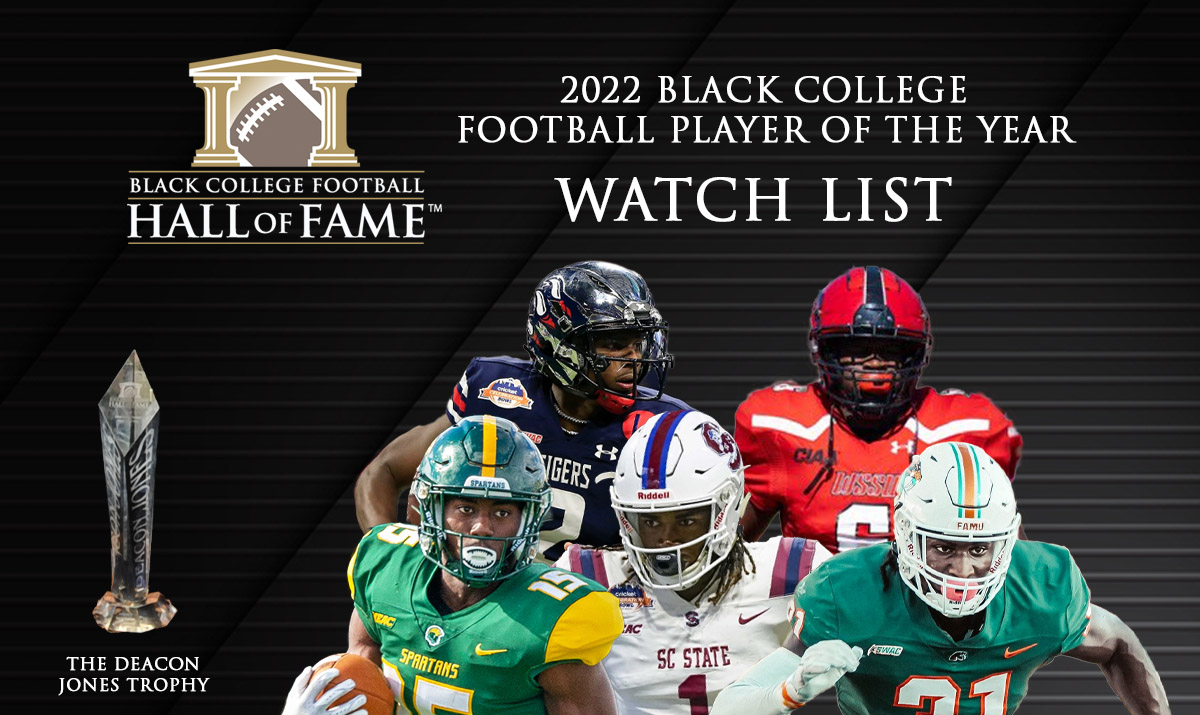 The Watch List for the 2022 Black College Football Hall of Fame is out, featuring players from the CIAA, MEAC, SIAC and SWAC.

Atlanta, GA (August 16, 2022) – The Black College Football Hall of Fame (BCFHOF) announced the 2022 Watch List for it’s 2022 player of the year award on Tuesday. The award is presented annually to the most outstanding football player from a Historically Black College & University. Former North Carolina A&T and NFL running back Tarik Cohen was selected as the inaugural recipient of the Award in 2016; Bowie State quarterback Amir Hall was the 2017 and 2018 recipient; former Tennessee State and NFL WR Chris Rowland was the 2019 recipient; and former Alabama A&M QB Aqeel Glass was the recipient of the Spring 2021 and 2021 Fall award.

Four finalists will be unveiled after the season. The winner of the Black College Football Player of the Year Award, which will be announced during halftime of the 2023 HBCU Legacy Bowl, will be presented with the Deacon Jones Trophy. The HBCU Legacy Bowl takes place on Saturday, February 25, 2023 in New Orleans, Louisiana. The game will be broadcast live on NFL Network.

“The Deacon Jones Trophy is the most prestigious football award for HBCUs,” said BCFHOF co-founder and 2012 inductee James Harris. “Deacon Jones was a pioneer and an icon, and still to this day represents the very best of Black College Football.”

The Watch List candidates have been selected based on past performance and future potential. Additions to the list may be made as the 2022 season progresses. The finalists and the winner will be chosen by a Selection Committee.

David “Deacon” Jones played defensive end for South Carolina State University and Mississippi Valley State University from 1958 to 1960. Blessed with speed, agility, and quickness, the “Deacon” became one of the finest pass rushers in the business. He won unanimous All-NFL honors six straight years from 1965 through 1970 and was selected to eight Pro Bowls. Jones is an inaugural Black College Football Hall of Fame inductee (2010) and is a member of the Pro Football Hall of Fame.

ABOUT THE HBCU LEGACY BOWL