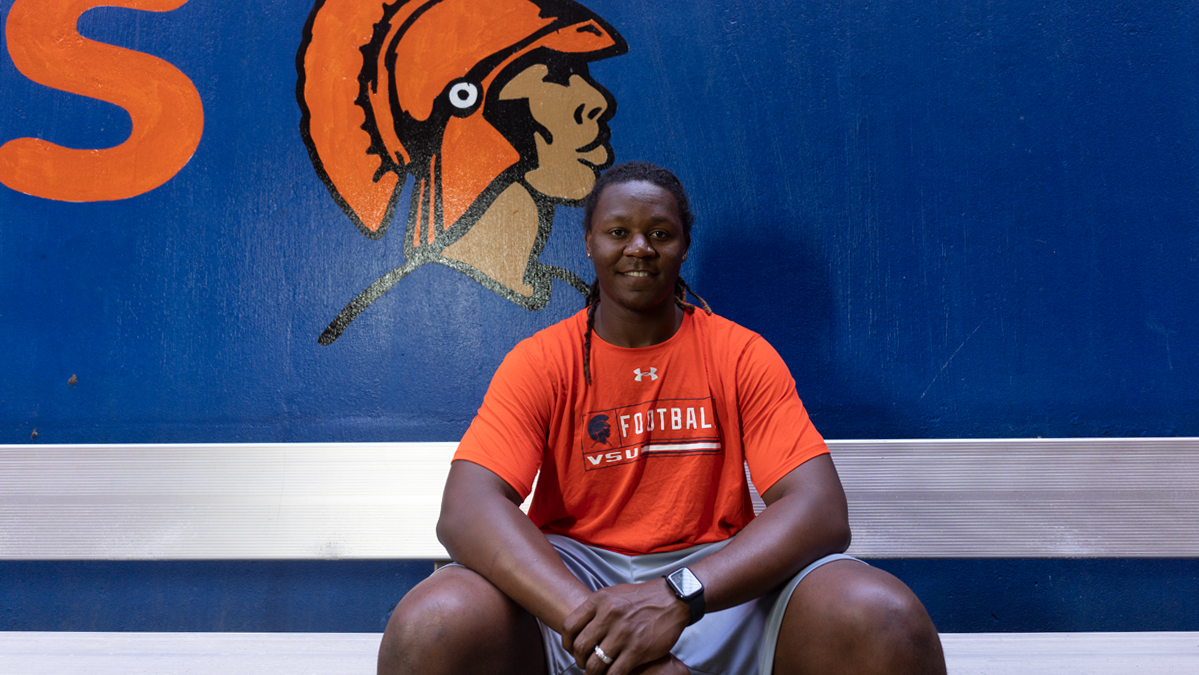 Former WSSU star and NFL player Carlos Fields has been propelled by coaches who believe in him, and a wife that pushes him to pursue his dreams.

If it had been solely up to him, Carlos Fields probably wouldn’t be the new defensive coordinator at Virginia State University right now.

Sitting in his still-evolving office on the back end of Rogers Stadium, the 31-year-old former All-American and NFL player admitted that he hates change. This is why when his college defensive coordinator and mentor Kienus Boulware called him a year ago to get him to join the Alabama A&M staff, he tried his best to get out of it.

“I’ve got a son who was nine at the time and then my daughter was one and I was expecting another one,” Fields explained. So I’m like, well, you know, I can’t do it.”

Fields had gone back to Winston-Salem State to finish his degree after three years in the NFL. In those three years he had stints with the Oakland Raiders, Tampa Bay Bucs, Giants, Washington, Indianapolis Colts, Buffalo Bills, San Diego Chargers and Philadelphia Eagles. He had finally found some stability as a math teacher and football coach in the Triad area and wasn’t thrilled with the idea of packing up again and heading to Alabama.

Luckily for Alabama A&M — and eventually Virginia State — his wife, Taz, gave him the green light.

“I ended up talking to my wife about it and she was like listen, Carlos, I got the house,” Fields said. “So just you go and do that, and I got the house. You go out and explore and just live your dreams.”

So Fields joined the Alabama A&M staff that featured many of the men who coached the record-breaking WSSU teams when Fields was a player there a decade earlier, including head coach Connell Maynor. Fields coached defensive ends for AAMU, shuttling back to North Carolina when he could to make sure his family was taken care of as he broke in as a position coach at the FCS level.

Henry Frazier was hired as Virginia State’s new head coach in May, which meant he was tasked with putting together a staff after the rest of the nation had already completed spring practice. After clearing it with AAMU’s Connell Maynor, he approached Boulware about the position.

“He was like, I got somebody for you. He brought up my name,” Fields said of Boulware. “And Coach Frazier is like, man, listen here’s like the third person that told about this guy.”

Frazier corroborated the story, calling him “a CIAA legend.”

“He was a very good football player,” Frazier said. “But I stumbled onto him because people kept bringing his name up to me. I’m sitting there like — I remember him as a player. I didn’t even know he was coaching. They were like, ‘man you might wanna check this young guy out.’ It was three totally different conversations and they didn’t overlap.”

The two spoke on the phone and before he knew it, Fields had another coaching opportunity.

“Once I talked to him,” Fraizer said.  “I said he’s gonna be perfect for us.”

Fields says he was excited and thrilled about the opportunity, but he had to make sure his wife signed off on it.

“I went, talked to my wife about it and she was like —  listen, it’s closer to home, you’re going to have a chance to go out and make a stamp for yourself vs. being Coach Boulware’s protegé.”

Now Carlos Fields has the task of getting up to speed with little time and a short window for preparation. He says there are about 25 players in summer school at the moment, meaning the bulk of the team will arrive when practice starts next month.

“At Division II, you can’t really afford to send guys to summer school,” Fields said. “At Division I, it’s about 50-60 guys at summer school with no problem. So now we’ve got guys that are working. So you got to kind of zoom guys so they can kind of be ahead of the game once they get here.”

Fields said he’s looking forward to working with his team on the little things to add to what they already have.

“I tell everybody I had some athletic, god-given talent. I ran a 4.4, I was really smart at like understanding the game — to a certain level,” Fields said. “But then once I once I got to the NFL, I’m like, man, like these guys know it.”

Now it is Fields’ job to transfer that knowledge to his players.

“Just the knowledge of the game is what I want to be able to preach to those guys and then have those guys be coaches on the field so they can be able to be successful.”