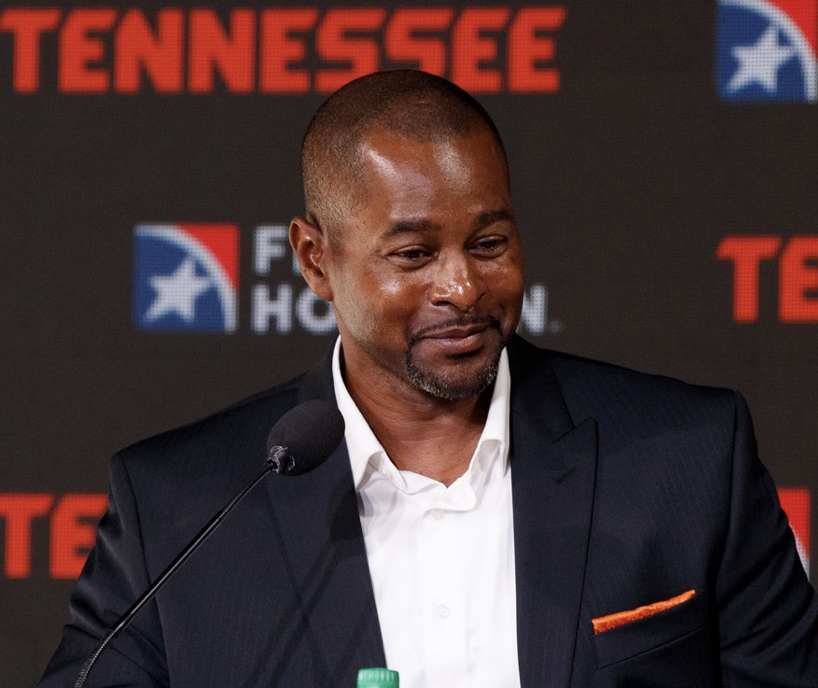 Duane Ross, the former director of track & field programs at NC A&T, was formally introduced Monday as the new head track and field coach at Tennessee. Vice Chancellor/Director of Athletics Danny White made the announcement on the UT campus.

“There was one name at the top of every single conversation when we started talking about what’s happening at an elite level in track,” said White. “Every time you looked up (at the NCAA Championships last week), all the Blue Blood big brands were on the video board. And every time you looked up in Eugene (Oregon), you’d see North Carolina A&T over and over again. So impressive the program that Duane has built there. Really, broad-based excellence across the board.

“We’re doing what our group asked for,” White said, “get a proven winner.”

While Ross’s hiring was informally announced two weeks ago, the new Tennessee coach dropped a bomb Monday when he hinted that his son, three-time NCAA Div. I 400 meter champion and Olympic gold medal winner Randolph Ross Jr., a junior at A&T, would be joining him in Knoxville.

“Long story short, I don’t know what he is going to do, but he is in orange today if that says anything,” Ross said at the end of a question about his son’s future plans. Orange is Tennessee’s primary color. Ross said his son has a year and a half of eligibility left.

The younger Ross won this year’s NCAA Div. I indoor 400 meters title and the last two 400 meter outdoor titles. He also has a gold medal from the Tokyo Olympics in the 4×400 meter relay.

The A&T women finished tied for fourth with Alabama last season in the outdoor championships.

Through 10 years as a Division I head coach, Ross has developed more than 30 first-team All-America performers at A&T.

“First off, let me say that I’m extremely blessed and excited to be here,” Ross said at the press conference. “This is an absolutely wonderful opportunity that, I’ll be honest, I don’t deserve. To be around so many joyful people and so many people that want to be invested in my success as well as the student-athletes’ success just says a lot. I’ve just been overwhelmed and overjoyed the last couple of weeks. So I’m excited to be here, excited to be a part of this family. I’m ready to get to work.

“Let me be clear, even at North Carolina A&T, that program that we built for the last 10 years and was super successful—I didn’t deserve that either,” Ross added.  “And this is why I say that: I know a lot of our success we had at North Carolina A&T was because I woke up every morning and realized that I didn’t deserve it, but I worked hard every morning to earn it, and I instilled that belief in our student-athletes. I mean come on, I coach track and field for a living. And I know you guys have seen the releases, I got paid a pretty good amount. So, to be able to do this every day, this is my passion, it’s not a job. There are so many people in other situations that would love to be doing this. So that’s why I say I don’t deserve it, but I’m going to work hard every day to earn it.”

Ross also talked about the prospects for success at Tennessee.

“The sky is the limit. The sky is the limit, but my belief was the sky was the limit where I was at (previously). I’ve never thought any less of my ability or my student-athletes’ ability. What I’ve said for 10 years was. ‘if you give me a track and give me a weight room, we are going to compete with the best and ultimately be the best.’ That doesn’t change.

“I loved our alumni at North Carolina A&T. I loved my staff, and I loved my AD. The biggest thing for me was the next opportunity. As I mentioned, my initial conversation and that feeling that Danny and his staff are invested in my success, in Sean’s (Carlton) success, in the staff’s success. We spend so much time investing in our student-athlete’s success, so sometimes, we forget that we want to be the best at this too. Danny made a statement to me when I initially met him that pretty much sold it. We spent hours together, but he could have led with that one statement and avoided all that talk. He said, ‘We got your back.’ That was huge. That was huge for me.”

White had promised to also bring in an elite cross country and distance coach to join Ross and did so in naming Sean Carlson. He comes to Tennessee after spending the last 10 years at Notre Dame, transforming its distance group into one of the nation’s elite. During his stay in South Bend, Indiana, he guided athletes to four American collegiate records, 13 school records, 29 NCAA All-America performances, two NCAA records and three NCAA championships.

Tennessee boasts a rich, championship tradition in track & field/cross country. The programs have won a combined eight team national championships—five by the Vols and three by the Lady Vols. Four of those NCAA team titles have come since 2000. Tennessee track also has produced 45 Olympians who have earned 18 total medals, including 10 golds.

On if his son (Randolph Ross Jr.) has eligibility left and where will he spend it if so…

“Yes, he has a year and a half. That’s a great question. I have been getting it all week. Let me tell you something about my son. I know there has been a lot of talk about him running professionally. There was a lot of talk about him running professionally last year after he ran and went to the Olympics. My son came to me, and I sat him down and said, ‘We need to sit down and have a real conversation about the future.’

“He cut me off, and he never cuts me off. This is how I knew he was serious. He cut me off and said, ‘Dad, nothing about my life is going to change if I go pro. I’m not about to go buy a house or spend money. I want to do what I am doing, I have aspirations to break the collegiate record. I want to break the world record, I am in no rush to do these things that everyone is speaking about.’ As a father, that made me feel like I’ve done something right for him to come out and say those things. This is going to be his decision.

“Our latest and greatest conversation is when he came to me recently and said, ‘I want to win a team national championship.’ We’ve had those elude us, finishing second this past indoor season, third outdoor (last year), fifth last indoor and then this year having some mishaps at the NCAA Championships when we should have been in contention. We have been so close. My heart goes out to him and my daughter (Jonah Ross), who is also on the team. He wants to win a national championship. I have stressed to them since I’ve had them on my team that you don’t want to miss out on that. I was a part of the teams at Clemson when we finished second at the NCAA Championships twice. My alumni and I, we still talk about those moments and coming up short. I tell our guys all the time, you don’t want to live your life with regrets. When you’re out there on the track, be disciplined and leave it all out there. Long story short, I don’t know what he is going to do, but he is in orange today if that says anything.”

On if his success at North Carolina A&T, an HBCU, gave other programs at HBCU schools optimism that they could succeed at a high level…

“I hope so. I’ve spoken to some coaches that are in the MEAC (Mid-Eastern Athletic Conference) and the SWAC (Southwestern Athletic Conference) who have thanked my staff and I for what we did. I’ve told them, ‘No thanks needed.’ This is what we are supposed to do as coaches. We are supposed to lift each other up and create other opportunities for everyone. This is something, as I mentioned earlier, that I take a lot of responsibility in. I hope that I did.

“I hope the next coach at A&T comes in and is able to take that program higher. Sean and I spoke about this and I think it’s why our relationship is going to be so great and this program is going to be unstoppable—we both understand the gift. It’s a gift for us to be able to change the lives of young men and women. It’s not about us. We both understand that. When coaches collectively understand what the true gift is and we can muddle through the jealousy of what we are doing, I think this sport is going to grow. This is an Olympic sport. It’s supposed to be the most talked about and the most watched sport in the world. I hope that I did leave a great legacy behind for HBCUs. That was the toughest part of my decision actually. When you build something for 10 years, you just can’t walk away from it that easily. I knew what we built there. In the first few years, it was about winning championships. I will admit that. Through the course of that journey, it became more about the mission. The mission was teaching these black men and women that they can do whatever they aspire to be. That literally became the mission. It wasn’t about the trophy. It was about saying, ‘We can be the best despite what people are saying.’ It was always the same thing every year: ‘You don’t have the resources. You can’t do this. You can’t do that.’ In the very first meeting at North Carolina A&T with some of our alumni, a man told me that I was too ambitious, that I couldn’t win nationals and that I couldn’t do all of the things that we’re talking about. Our naysayers have not learned yet that all that does is give me more power. It gives me more focus. Sean and I are about to do something that this country’s never seen.”