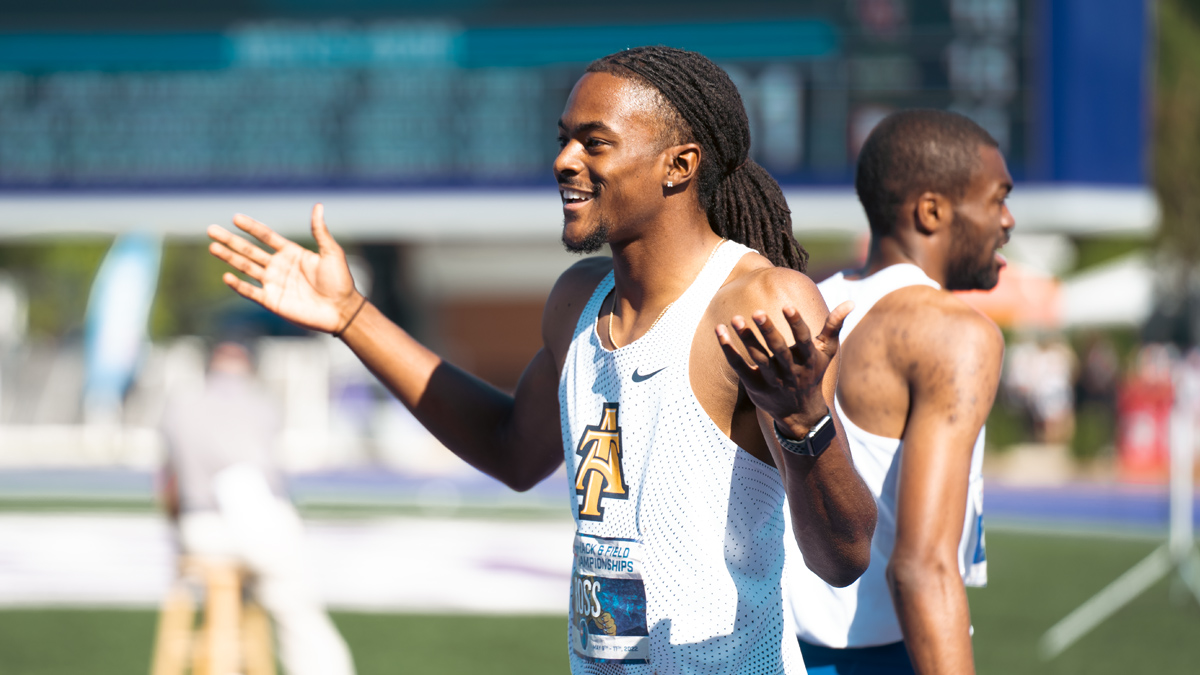 NC A&T men’s track lit up the record books in its lone Big South outdoor track performance, but fell one point short in a dramatic finish.

HIGH POINT, NC — The number of records set by NC A&T, who will be leaving the Big South for the Colonial Athletic Association (CAA) after just one year, is likely still being tabulated. What’s not is the men’s outcome that left A&T just one-point short of a huge comeback victory to host High Point University.

The drama was on the men’s side that came down to the final 4×400 meter relay event. NC A&T, with dominance in sprint events, had all but made up a last-day deficit of 103 points. The Aggies entered the final race in third place with 167 points, trailing second place Campbell (169) and defending champion High Point (173).

The favored Aggie quartet of Raheem Hayles, Shemar Chambers, Aveon Reed and Cory Poole did its job, winning the event in 3:07.55 and earning ten points for first place. The win boosted A&T”s total to 177 points. The drama was behind the Aggies.

Campbell finished fourth in the event only to be disqualified when its lead runner was ruled to have run out of his lane. Despite protests from Campbell head coach Virgil Givens, that decision stood. High Point, who had finished fifth, was moved up to fourth. The resulting five points for the host Panthers allowed them to escape with a one-point win (178 to 177) over the Aggies. Campbell finished third (169).

Had the original result stood, A&T, Campbell and High Point would have finished in a three-way tie for first with 177 points. The A&T women won the women’s competition.

NC A&T’s men’s ascension toward the top spot began when Brayden Hodgest, who won Tuesday’s shot put competition, won his second event of the week. He took the discus with a throw of 50.93m.

A couple of hours later, the Aggies won Wednesday’s first track event, the 4x100m relay as Randolph Ross Jr. and Javonte Harding helped put up a Championship Meet and Vert Stadium-record time of 38.74.

North Carolina A&T also took the top three spots in the 400m Hurdles, led by Poole’s Big South record, Championship Meet record and Vert Stadium-record of 49.42 seconds to sweep both hurdle events — the first to accomplish this feat since 1998.

Aggies disappointed but not discouraged

The Aggies moved into first-place on the team leaderboard following the 200m dash, as Harding’s winning record time of 20.16 just eclipsed Ross’ 20.26.

But A&T head coach Ross cited a failure to sweep the top four places in the 200 as one of the reasons the Aggie men came up short for the championship. Stokes finished fourth (20.49) and Brandon Nya was eighth (21.19).

“That 200 race should have been swept all day long,” said Ross. “That’s not what we trained for; we trained to come in here and do what was expected.”

One other disappointment for the demanding Ross was that his top 100 meter hurdler, Rasheem Brown, fell midway through his final. Though he finished in eighth and last place, he was disqualified for not finishing in his assigned lane, wiping away the one point that could have produced a tie.

“I’m proud of the men who, when called upon, do what they’re supposed to do,” said Ross. “We knew it would be close, but my hurdler falling, the 200 and we had absolutely no presence in distance events. We have to correct that.

“But like I’ve always said, we train through the conference meet. Our goals are regionals and NCAAs. We were training on Sunday for regionals before we came out here. It’s the long game for us. It’s not to say the Big South championship is not important, but it’s not as high up on my priority list as NCAAs.”

Hodgest earned freshman of the year honors and Ross Jr. was named most outstanding performer. Campbell’s Athanas Kioko defended his 1,500m crown and also won the 800m (1:49.52) and repeated as the 5,000m champion (14:00.68). His 30 accumulated points earned him the Most Valuable Athlete award.