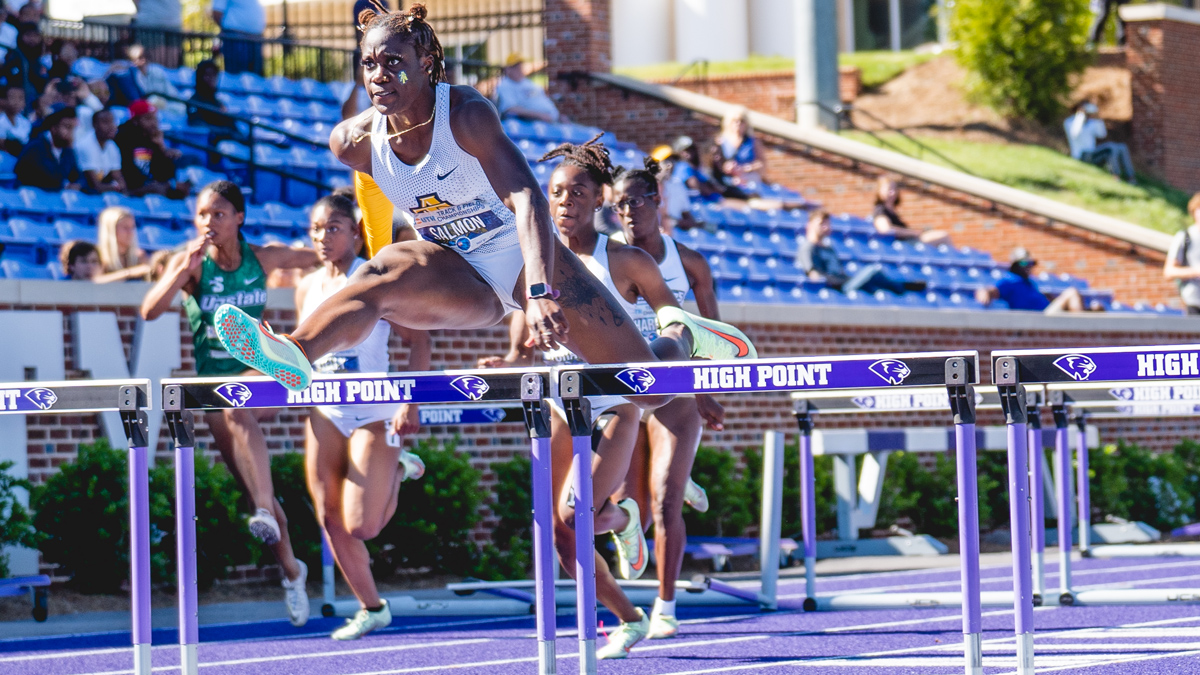 NC A&T came from behind to take the women’s Big South Outdoor title, setting plenty of records along the way to the championship.

The NC A&T women’s track squad faced a 50-point (88-38) final-day deficit to defending Big South champion High Point but made sure its competition did not end in similar drama to the men, who lost by one point. They put up 168 last-day points, dominating events in the field and on the track, to come away with 206 championship points. High Point was second with 187 points and Hampton third (116).

The Aggies’ climb into first-place began on the field when Nazah Reddick and Kenady Wilson finished 1-2 in the high jump. Reddick soared to a record-tying height of 1.78m while Wilson was second at 1.69m.  A couple of hours later, A&T’s Julieth Nwosu (48.77m) and Loren James (47.08m) finished 1-2 in the discus.

Between those two events, the Aggie ladies went to work on the track. The quartet of Symone Darius, Delecia McDuffie, Jonah Ross and Grace Nwokocha first dashed to a Big South Championship Meet record and facility record in winning the 4x100m relay with a time of 43.19.  A&T finished 1-2 in the 100 meter hurdles that followed as Paula Salmon won in a time of 12.76, followed by Breanne Bygrave at 13.42.

Nwokocha and Darius and two others gave the Lady Aggies a lead midway through the afternoon that they would not relinquish following the 100m dash. Nwokocha won in 11.13 seconds with Darius second in 11.25. Ross was sixth in 11.75 with Shaliciah Jones seventh in 11.93.

Nwokocha came back later to lead a trio of Aggies in the 200m when she matched her multiple Big South records in the event with a winning time of 22.75 seconds. Darius was.second (22.78) with McDuffiie third (22.97).

Freshman sensation Nwokocha, who participated in the Summer Olympics in Tokyo for Nigeria, ended with wins in the 100, 200 and 4×100 relay on Wednesday.

Duane Ross, the Aggies director of track and field programs, gave Nwokocha high praise, comparing her to past Aggie national champions such as Kayla White and Cambrea Sturgis.

“Grace is extremely talented,” said Ross, who won women’s Big South coach of the year. “As young as she is, and to be running the way she is running is truly special. We just got her here in January, so she really hasn’t been indoctrinated into what we do yet. She is still learning and going through a lot of trial and error as we get ready for regionals and nationals.

She is a quick learner, so as soon as she gets a full year here in the weight room and on the track and gets acclimated to our culture, she will take off.”

Nwokocha claimed freshman of the year honors for having the most accumulated points by a freshman at the championships with 22.5. She also earned most outstanding performer honors as her record-breaking effort in the 200m is ninth in the country.

Hampton’s Amira Aduma accumulated 23 points to earn the Most Valuable Athlete award, as she won the long jump, was third in the 100m, fourth in the 200m and was part of the second-place 4x100m relay team. Hampton finished in third place in the women’s title race.