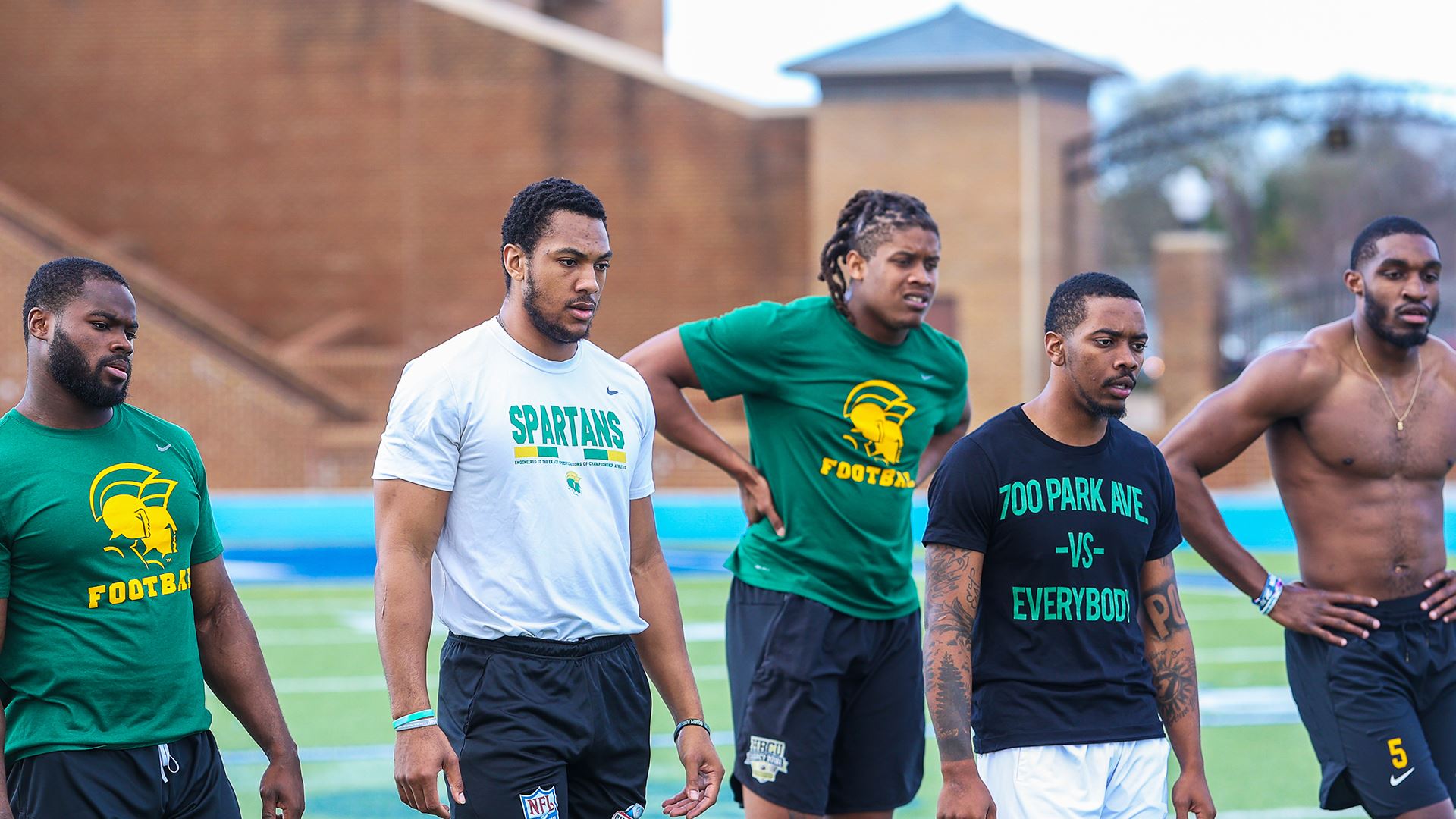 “We’re coming from an HBCU, on paper we’re already overlooked, but these HBCU athletes are just as good as the Power 5 schools.”

Norfolk State defensive lineman De’Shaan Dixon joined an elite and exclusive club when he took the field in the 97th East-West Shrine Bowl on Feb. 3. Dixon was the second Spartan ever invited to the Shrine Bowl, behind former NSU defensive back Don Carey in 2009. If Carey’s story is any indication, Dixon could receive a life-changing opportunity at this year’s NFL Draft in April.

Carey, taken by the Cleveland Browns in the sixth round, is the last NSU player to hear his name called at the NFL Draft, and the only in the Division I era (since 1998). Dixon is one of a handful of Spartans working this spring to enhance their appeal as pro prospects.

“I’ve been enjoying the process,” he said. “It is overwhelming, it is stressful, but I think it’s worth it. I’ve enjoyed it and met a lot of people and learned a lot of things.”

It is overwhelming, it is stressful, but I think it’s worth it.

Dixon played against and alongside players from prestigious football programs including Notre Dame, Virginia Tech, Penn State, Miami, and Auburn at the Shrine Bowl. Although he was the first Spartan in over a decade invited to this top-tier event, Dixon didn’t feel the caliber of play was drastically different from what he faced in the MEAC.

“It was really no different,” he said. “They put their pants on the same way, nothing special, just the school’s name and their program. We’re coming from an HBCU, on paper we’re already overlooked, but these HBCU athletes are just as good as the Power 5 schools.”

Dixon was one of four NSU players to participate in the HBCU Legacy Bowl this year, joined by quarterback Juwan Carter, offensive linemen Jalen Powell and defensive lineman Chris Myers. Presented by the Black College Football Hall of Fame, the all-star game provided some of the top players from the MEAC and SWAC conferences an opportunity on the big stage, with the game broadcast live on NFL Network.

“It was great,” he said. “We’re all from HBCU’s, we’ve got that certain feel and swagger to it, and it’s amazing to feel that we’re the best of our class.”

Powell has gotten help from a fellow Spartan for his training regimen.  One of his frat brothers referred Powell to former NSU defensive back Dustin Johnson, who wound up having lots of mutual connections with him. Johnson trained the offensive lineman leading up to the HBCU Legacy Bowl, including helping him put on 20 pounds of mass to handle the physicality of the next level.

“He helped me with my explosiveness and body control,” Powell said.

Seven players represented NSU at the team’s Pro Day with Hampton last Friday, participating in a variety of fitness tests in front of NFL scouts at HU’s Armstrong Stadium. Powell, Myers, and Dixon all displayed their abilities at the showcase, in addition to wide receivers Justin Smith and Marcque Ellington, linebacker Matt Hodges, and quarterback Juwan Carter.

Each athlete experienced pre-workout jitters heading into the tryout of sorts for the sport’s top professional organizations, but each experienced a sense of relief when their performances exceeded expectations. Dixon said he felt most unsure about the bench press going into the workout but hit his target rep total.

“That’s what had me most stressed, but I wind up doing what I needed to do,” he said. “Overall, it was a pretty successful day.”

Unlike the rest of their peers, Carter and Meyers had experienced some of the hoopla surrounding these tests earlier. The two represented Norfolk State at the first-ever HBCU Combine, held in Mobile, Alabama, in late January. Carter didn’t think he produced the numbers he was capable of then, so he geared up his training the next two months to specifically prepare for the Pro Day drills.

His hard work paid off. Carter improved his 40-yard dash and vertical leap at the Norfolk State Pro Day and made some impressive deep throws that he hadn’t had a chance to display during the season. Still, he maintained that the stats from these types of workouts don’t accurately exemplify a player’s abilities on the field.

While his teammates have made the most of their postseason appearances, Smith has faced a different, trying offseason. The redshirt senior wideout suffered a torn meniscus in his right knee towards the end of the 2021 campaign, significantly limiting his production in the final three games of the year. He underwent surgery on Dec. 11 and couldn’t walk for the next eight weeks.

Although it wasn’t the first injury he’d faced in his college career – Smith dealt with hamstring issues his first couple of years – he’d never had one this serious. The timing couldn’t have been worse.

“With it being my senior year, it’s just like ‘why now?” Smith said. “That’s what I was really thinking the whole time, ‘why now?”

With Pro Day rapidly approaching, Smith’s lengthy recovery could not come fast enough. Although he won’t be officially cleared for full exercise until April, Smith made an exception to perform two activities: 40-yard dash and vertical jump. He recorded a 31.5’ leap, and although he’s still waiting on the results of his sprint, Smith thought he accomplished the high goal he set for himself.

“There’s definitely still things that I have to catch up on,” Smith said. “There’s more workouts I’ll need to do to get myself into the groove of things, running routes and things of that nature.”

While the athletes continue to work out, they must now play a waiting game until the big day. The NFL Draft is set to begin on Apr. 28 when the players will anxiously sit on hold to receive the eagerly anticipated phone call from one of the league’s 32 franchises.

But Smith and his teammates know their futures do not solely depend on the results of draft day. Each player plans to take other opportunities if they don’t get drafted, including potential spots on Canadian Football League rosters or various professional indoor football leagues.

The Spartans need to look no further than former Norfolk State defensive back Bobby Price as a role model for a successful chase of NFL dreams.  After going undrafted in 2020, the Detroit Lions signed Price to their practice squad before promoting him to the team’s active roster later that year. He has appeared in 17 games since, totaling 18 tackles and three pass deflections.