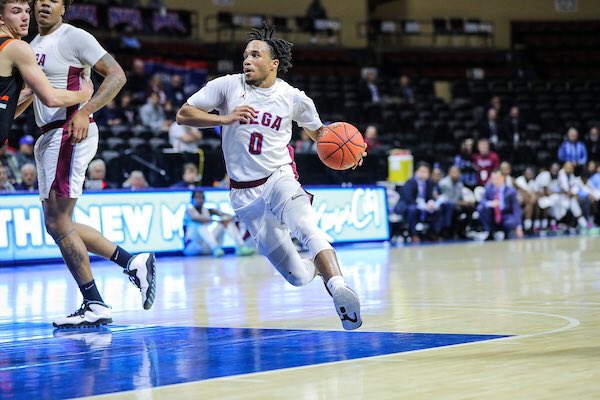 Talladega College is one step closer to becoming the first HBCU to win an NAIA national title in 45 years.

An HBCU is one step closer to playing in a national championship game.

Second-seeded Talladega College knocked off Concordia (Neb.) 77-69 to advance to the “Fab Four” of the NAIA Tournament on Saturday night.

Kameron Brice led the way for Talladega with 20 points on 6-for-11 shooting from 3-point range off the bench. Cam Potts had 15 points, 11 assists and six rebounds and Darryl Baker chipped in 10 points. Talladga really took advantage of the 3-point line, hitting 11 of 26 attempts (42.3 percent).

TC continued to play tough defense. It held Concordia to 11 points below its season average as it shot just 15 percent from the 3-point line.

It will play no. 2 Thomas Moore for a trip to the national championship game.

Talladega has never won an NAIA title, but plenty of HBCUs have. The NAIA was the first national tournament to open its doors to HBCUs, preceding the NCAA. At one point teams could elect to play in either the NCAA or the NAIA Tournaments. Many HBCUs found success there.

Tennessee State won three titles in a row as Tennessee A&I from 1957 through 1959 under the tutelage of Naismith Basketball Hall of Famer John McClendon. Grambling and Prairie View won titles in 1961 and 1962. Central State won a pair of NAIA titles in 1965 and 1969, but Kentucky State did even better, winning three in a row from 1970 through 1972. Coppin State (1976) and Texas Southern  (1977) would win national titles just before NCAA teams became ineligible to compete in the NAIA Tournament.

No HBCU has won the NAIA title since then. If Talladega is able to win it would be the second national championship won by a men’s basketball program at an HBCU this year as Paul Quinn College did so earlier this month at Virginia State University.

Tipoff for Sunday’s game is set for 7 P.M. at Municipal Auditorium in Kansas City.