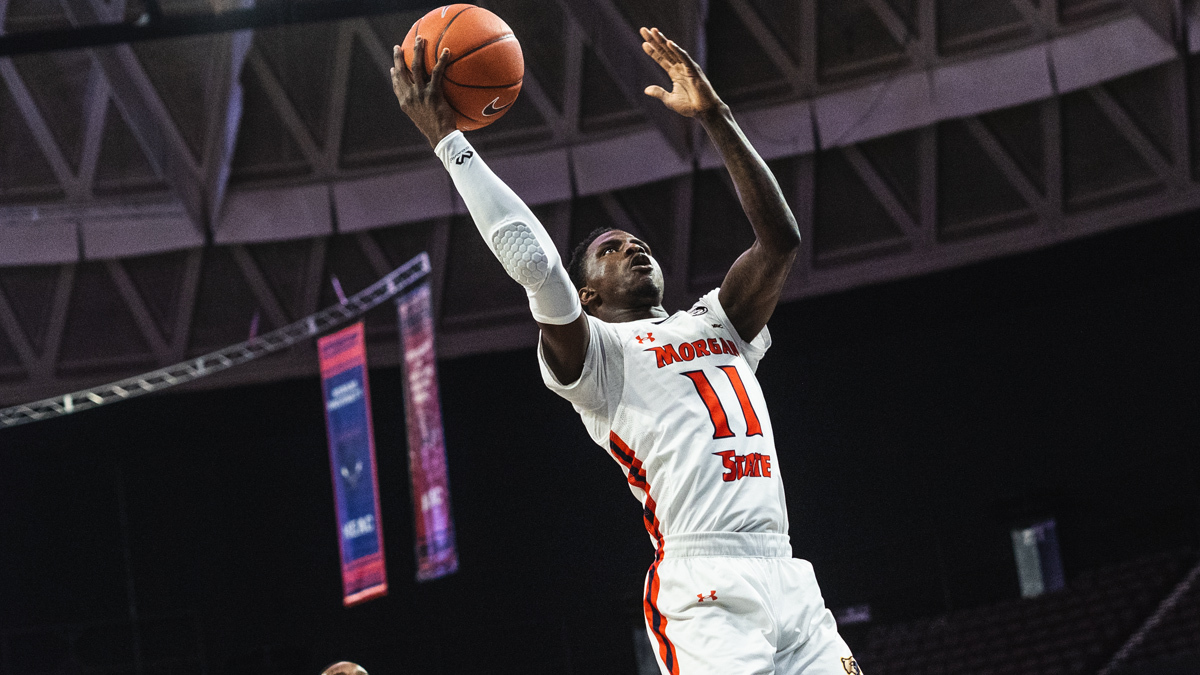 Morgan State senior Malik Miller (#11) was 8 of 8 from the floor for 16 points and led the Bears with 7 rebounds and 3 steals as they held off fifth-seed SC State in an MEAC Tourney quarterfinal Thursday.

It took a supreme effort and contributions from a variety of Kevin Broadus’s squad to hold off the hard-charging Bulldogs (15-16) of first-year coach Tony Madlock. It was just what Broadus expected. Morgan State prevailed in two close games in the regular season.

“Tony Madlock has changed the mentality of that team and that program,” said Broadus of the first-year coach and former Memphis assistant that he’s known for some time.

“When his son (freshman guard TJ Madlock) went down (late in the game), I said, ‘is TJ gonna be alright?’ He said, ‘That’s my blood, he gon’ be fine.’ And he was fine. And I take my hat off to that family.”

Morgan State had five players score in double-figures. Senior swingman Malik Miller led the way with 16 points, hitting all eight of his shots from the field. He added team-highs of seven rebounds and three steals while tying for the team high with three assists.

Six-ten back-up center Kevin Venning had 15 points and was a force inside draining 7 of 12 shots in the paint. Six-eight forward Lagio Grantsaan added 13 points.

Senior MSU guard Isaiah Burke had 13 points, none bigger than a 3-point basket with 1:07 left that stretched the MSU lead to 78-74 after SCSU had pulled to within 75-74 on a 3-pointer by Rahsaan Edwards 25 seconds earlier.

SCSU scored the first four points of the second half to take its only lead in the period at 41-40. Morgan State responded, building its largest lead at 66-56 on a dunk by Venning with 8:49 to play. From there the scrappy SCSU squad kept working and slowly whittled the lead back down to one.

NCCU’s Keith McGee was fouled after grabbing a rebound with :48 seconds left. His two free throws put the Bears up 80-74. But SCSU freshman guard Madlock, the coach’s son, drained a clutch, off-balance 3-pointer six seconds later to pull the the Bulldogs within 80-77.

On the Bears’ ensuing possession after a timeout, big man Lagio Grantsaan inexplicably tried a pass from the top of the key that went out of bounds off MSU giving the ball back to the Bulldogs with :20 seconds left.

Edwards’ 3-pointer to tie, just rimmed out and the Bulldogs had two other putback chances in close before SCSU’s Deaquan Williams was fouled with one-tenth of a second on the clock. The officials reset the clock to 1.1 seconds. In the double-bonus, Williams missed the first attempt and purposely missed the second. He rebounded his second miss but could not get off a shot as the clock expired.

Five Bulldogs scored in double-digits led by Madlock’s 19. The freshman also led the Bulldogs off the boards with 11 rebounds. Omar Croskey tallied 11 before fouling out with 1:37 to play. Jemal Davis and Rakeim Gary both had 10. Edwards, Croskey, Madlock and Gary all canned two 3s the help keep the Bulldogs in touch.

“We wasn’t worried about the 2-pointers on offense that they would score,” Broadus said. “We were moreso worried about the 3-pointers. And they only made eight (of 23 attempts), but they were eight crucial ones. And they came at crucial times of the game. That was the adjustment we had to make to go small.”

Broadus, whose team shot just 11 3s (canning five) said SC State was the best offensive rebounding team in the league. His team held its own, holding the Bulldogs to 16 offensive and 16 defensive boards. MSU had 29 rebounds to SCSU’s 32.

365
The Latest in HBCU Sports and Culture