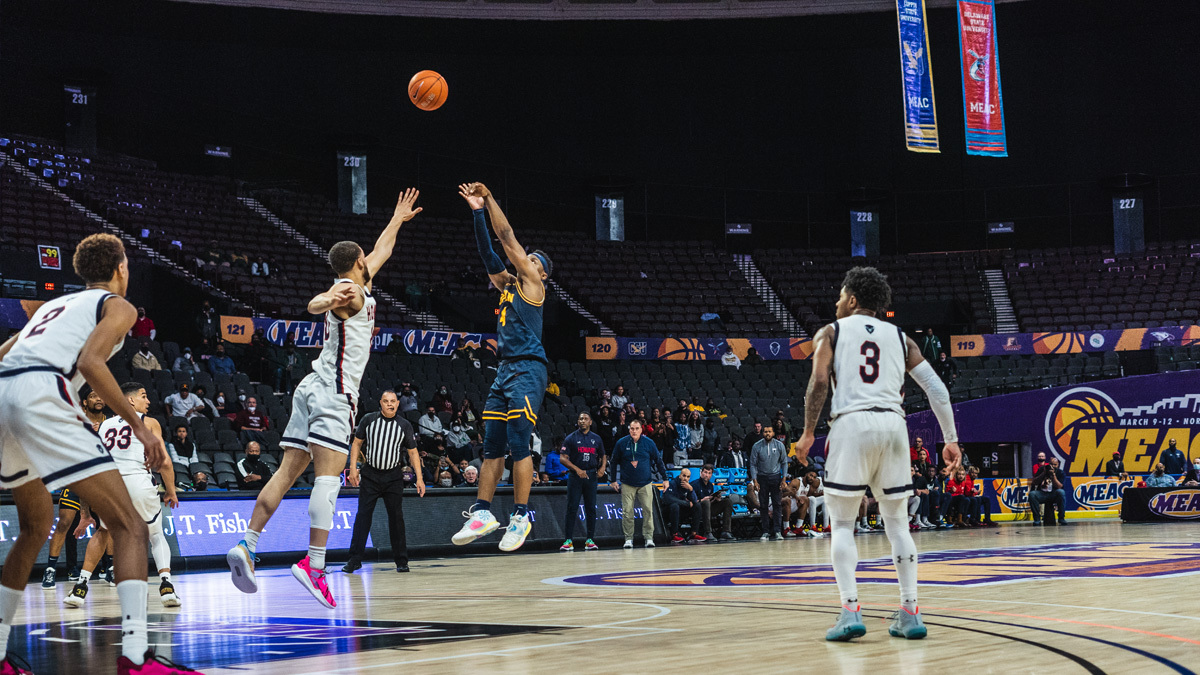 Nendah Tarke’s (#4) scores on a game-winning pull-up jumper in the final seconds over Howard’s Deven Richmond to knock off the 2nd-seeded Bison, 59-57 in the MEAC tournament quarterfinals. It was the third win of the season for the Eagles over the Bison and second-game winning play for Tarke vs Howard.

After an official review, officials put two-tenths of a second on the clock. Howard threw a length-of-the-court pass that was intercepted by Coppin (8-22) as the buzzer sounded.

“I got to my spot and made my shot,” said the lefthanded Tarke who made three game-winning shots in the regular season including a three-point play at the buzzer to beat Howard and a desperation shot from three-quarters court that beat Morgan State.

“Just stay composed, stay poised,” Tarke said of his team’s mindset going into the final play. “We’ve been here before. We’ve been in a lot of close games.” Coppin State lost 15 of its 22 games by single digits.

Tarke drove around Howard defender Deven Richmond before pulling up for the game-winner. He tied for the team-high with Kyle Cardaci with 15 points. He also led the Eagles with 12 rebounds and six assists.

It was the third win of the season for the Eagles over Howard, who swept two close regular season games.

With the win, Coppin State advances to Friday’s evening’s 8 p.m. semifinal where the Eagles will face the winner of Thursday’s 8 p.m. game between third-seed NC Central and sixth-seed Maryland-Eastern Shore.

The Bison were done in in the first half by a whopping 17 turnovers, six by freshman point guard Elijah Hawkins. They stayed in it by out-rebounding the Eagles 28-11. Hawkins and sophomore Steve Settle III, the Bison’s two second-team all-MEAC performers, scored two points each in the half, both off a pair of free throws. Forward Randall Brumant had nine points to lead the Bison. Settle had seven rebounds.

The Eagles who had three 3-pointers in building the early lead, and made three of their first four, shot 0-for-five from behind the arc for the rest of the period. Cardaci had two of the 3s and led CSU with nine points. Tarke had three inside baskets for six points.

Howard’s offense settled down in the second half and cut down on the turnovers. The Bison forged only their third tie of the game (after 2-2 and 4-4 early) at 50 all as Settle canned the first of two free throws with 6:22 left. Cardaci drained a 3-pointer to put CSU back up 53-50. Up 55-54,  Tarke scored on a Euro-step layup to give the Eagles a 57-54 lead with :36 seconds to play. Settles made two free throws to pull the Bison within one at 57-56 with 31 ticks left.

Hawkins was fouled inside and went to the line with :18 seconds left shooting two free throws in the double bonus. He missed the first but made the second to tie the game at 57. After a timeout, Coppin gave the ball to Tarke who cashed in the game winner.

Settle finished with team-highs of 16 points and 12 rebounds to lead the Bison. Hawkins had 11 and Bryce Harris had 10 points off the bench. First team all-MEAC guard and NCAA 3-point field goal percentage leader Kyle Foster, who had 19 and 27 points in Howard’s earlier losses to Coppin, was stymied all night by the Coppin State defense. He finished with just eight points, his third-lowest output of the season. Foster was 3 of 11 from the field, 2 of 6 on 3-pointers.